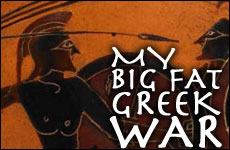 Who are the Chanukah heroes who saved our people?

When I was seven years old I was the only Jewish kid in my school. Yet you couldn’t tell by looking at me. I didn’t stand out in any way from the rest of the kids, and I didn’t really want to. But every year come December, in the name of multi-culturalism, I would find myself thrust into the limelight. As the only available representative of the Chosen People, my teachers would assign to me the responsibility of educating the class about Chanukah.

I pictured the tall, muscular Maccabees, shields emblazoned with the Star of David.

I took my role as scholar-in-residence quite seriously, and I would arrive at school looking very solemn, carrying my jumbo-sized book about Judah the Maccabee and a piping hot platter of homemade latkes and applesauce. All the kids would sit in a big circle and I would proudly show them the pictures of the tall, muscular Maccabees, swords glistening and shields emblazoned with the Star of David. I would read to my class the story of how this fierce and mighty band of Jewish warriors fought valiantly to defeat the Syrian-Greek army of the evil King Antiochus. I recounted how they recaptured our Holy Temple in Jerusalem and kindled the menorah which burned miraculously for eight days. My classmates and I would then conclude the celebration of Jewish military prowess by devouring the entire platter of latkes.

Like so many stories told to children, this one turned out to be distorted, inaccurate and greatly oversimplified. My book never explained what exactly all the fighting was about. It neglected to mention the fact that the Jewish people were irreconcilably divided, locked in a bitter struggle over the very definition of what it meant to be a Jew. It left out the terrible pain and suffering that resulted from assimilated Jews joining forces with the enemy to destroy Judaism, and the senseless tragedy of brother fighting brother. This was a Jewish civil war and – like most civil wars – there was nothing civil about it.

In the third century BCE, Alexander the Great exploded onto the world scene. By age 30 he had created one of the largest empires the ancient world had ever seen. Tiny Israel was incorporated into his massive empire, and the Jews suddenly found themselves exposed to all the beauty and splendor Greek culture. Greek values presented a grave threat to the traditional Jewish way of life. Its beliefs were antithetical to the Torah, but its attraction was almost irresistible.

Jews began to assimilate at an alarming rate. They learned the Greek language, studied Greek philosophy and played Greek sports. Many took Greek names. The Greek view that circumcision was a desecration of the body led some Jews to go so far as to undergo a painful procedure to have their Brit Milah surgically reversed.

The majority of Jews remained true to the Torah way of life, but wealthy and upper class Jews, enamored of Greek culture, became largely Hellenized. Many no longer saw themselves as members of a Holy People with a unique covenant with God. Instead they became members of a modern, cosmopolitan elite that strongly identified with Greek culture and political rule. Greek became the spoken language of the upper class and Greek manners, styles and values came to dominate much of Jewish society. Embarrassed by their “backward” Torah-observant brothers, they were determined to “modernize” Jewish society and to do whatever necessary to Hellenize their Jewish brothers.

With the political and military support of their Syrian-Greek allies, a campaign was begun to forcefully eradicate Jewish belief and practice. A reign of terror began against observant Jews and the Jewish way of life. Circumcision and Sabbath observance were banned. Kashrut and marital purity laws were outlawed. All Torah books were ordered to be confiscated and burned. The study of Torah was forbidden. Altars to Greek gods were built throughout the land of Israel. In Jerusalem, in the Holy Temple itself, an idol was erected where pigs were sacrificed daily to the Greek gods.

In short, Jewish practice and Torah observance was forbidden upon pain of death. Women who allowed their sons to be circumcised were killed with their sons tied around their necks. Jews who refused to eat pork or sacrifice pigs were tortured to death. Torah scholars were hunted down and brutally murdered.

In 166 BCE the smoldering tensions erupted into open conflict when Matityahu and his five sons – “the Maccabees” – began an armed rebellion. The Hellenized Jews brought in the forces of their Greek masters as reinforcements. A massive Greek army of 50,000 men deployed against the Jews. The superpower of the ancient world, they were highly skilled and trained professionals. They had the latest weaponry and armor. They rode into battle on elephants, the tanks of antiquity. The Maccabees were able to patch together a guerilla army of a mere 6,000 men.

How Did They Win?

Thinking back, the greatest distortion of truth in my childhood Chanukah book came not from the words, but rather from the pictures. There were dramatic drawings of the fierce warrior-Jews in magnificent battle gear. In reality, the Maccabees were not warriors at all. They were kohanim – priests of the Holy Temple in Jerusalem. Their followers were rabbis and yeshiva students. They were most probably physically weak and unimpressive. They had no experience or training. They fought with primitive weapons, sometimes with their bare hands. They fought because they had no choice. They fought because their spiritual existence was threatened. The odds of victory were impossible.

There is a Jewish concept known as mesirat nefesh. It means self-sacrifice. It means doing the right thing no matter what the personal cost. It means doing what you need to do even though you don’t see how it can possibly work out.

When done for the sake of Jewish spiritual existence, mesirat nefesh elicits a direct response from God. It creates miracles.

The Maccabees’ victory had nothing to do with military skill and was completely unrelated to physical strength. Chanukah represents this victory of mesirat nefesh. The conflict was ultimately a spiritual one and therefore it was not the sword, but the spirit, that conquered. The Maccabees fought with raw will and brutal determination. Their secret weapon was a self-sacrifice that stemmed from clarity of purpose. Their victory came from their willingness to fight against elephants with their bare hands. It was the victory of spirit over might.

Today the overwhelming majority of Jews are free to study and observeTorah if they choose to do so. I know of no place where Jews today are being tortured to prevent their eating kosher. Yet most Jews do not keep kosher. Mothers who circumcise their sons are not murdered, yet a growing number of mothers choose not do Brit Milah.

Surely the Jewish people have enemies, many who want to physically annihilate us. But we don’t find them trying to uproot our traditional way of life. That we are doing to ourselves.

We have no enemy to blame, making this all the more painful.

Assimilation and intermarriage are rampant. Jewish values are deteriorating daily. Jewish life is under siege. Yet we have no enemy to blame. We are simply falling apart from within. The wound is self-inflicted, and for those who care about Jewish identity, this only makes the suffering all the more painful.

We are in a world that assaults the Jew, pulls him away from his values, and undermines his very sense of self as a Jew.

Chanukah is the holiday of mesirat nefesh. The message of Chanukah is that no matter how impossible it looks, we need to fight off the forces that seek our spiritual destruction. And if today those forces are coming from within, then from within must come our absolute clarity of purpose. We need to know what it means to be Jewish. We need to understand who we are, what we stand for, and why it matters. This is a battle that can only be won with mesirat nefesh, the single-minded determination and self-sacrifice that opens the floodgates of blessing and elicits Divine assistance. This is our greatest strength and the only path to victory.

Only one question remains: Who will join the fight? Who will go down in history as the heroes who saved our people?

» Click here for the complete Chanukah section «
Like What You Read?  Give Jews around the world the chance to experience engaging Jewish wisdom with more articles and videos on Aish. It would make your mother so proud and as a nonprofit organization it's your support that keeps us going. Thanks a ton!

Rabbi Gedalia Kauffman was born in the “Mile-High City” of Denver, Colorado where he learned to snow ski as soon as he learned to walk. He attended university in Boston, earning a degree in Middle Eastern History. Rabbi Kauffman then spent three years travelling Southeast Asia, and ended up in Jerusalem, where he spent nine years learning at yeshivas including Aish HaTorah. In 2005, the Kauffmans were lured to Aish Johannesburg with promises of a maid and a swimming pool.

What is Rosh Hashanah?
In the Shadow of David and Goliath
Where Do the Laws of Nature Come From?
Saadiah Gaon, Rashi and Maimonides: How Three Rabbis Revolutionized Judaism
Comments