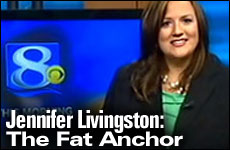 As a morning news anchor for television station WKBT in La Crosse, Wisconsin, Jennifer Livingston was no stranger to the occasional disapproving call or email from viewers. After all, the news staff at the station encouraged viewer critiques, so it was easy to shrug off the criticisms that focused on her clothing choices or other insubstantial matters.

But the email from Kenneth Krause was impossible to dismiss:

It’s unusual that I see your morning show, but I did so for a very short time today. I was surprised indeed to witness that your physical condition hasn’t improved for many years. Surely you don’t consider yourself a suitable example for this community’s young people, girls in particular. Obesity is one of the worst choices a person can make and one of the most dangerous habits to maintain.

I leave you this note hoping that you’ll reconsider your responsibility as a local public personality to present and promote a healthy lifestyle.

Livingston and her husband, Mike Thompson, who is an evening anchorman at the same station, were angry. They felt that Krause’s email was beyond the pale of acceptable criticism. Livingston called it a “low blow,” even bullying, that demanded a reply. And reply they did.

Thompson posted the offending email on his Facebook account, immediately drawing an intense debate with more than 1,500 posts, most of them supportive of Livingston. “Let her know that she is very beautiful in the eyes of her fans, friends and extended family,” posted one woman, “because we not only see a beautiful lady on the outside but also on the inside. The jerk that sent the email is a pathetic loser.”

Some harshly judged Livingston for her size, saying it was “not okay” to be fat, cajoling, “Get moving, Jennifer!”

I am much more than a number on a scale.

Despite the majority of supportive posts she received, Livingston hadn’t yet had her say. On October 2, she devoted four minutes of airtime to face down her detractor. “Hundreds of people have taken their time to lift my spirits,” she said during her broadcast. “The truth is I am overweight. You can call me fat and yes, even obese on a doctor’s chart. To the person who wrote me that letter, do you think I don’t know that? You don’t know me. You are not a friend of mine. You are not a part of my family, and you... know nothing about me besides what you see on the outside – and I am much more than a number on a scale.”

Livingston also pointed out that October was National Anti-Bullying Month and cautioned parents to model kind behavior to their children, so as not to teach through example that bullying comments or behavior are okay. “To all of the children out there who feel lost, who are struggling with your weight, with the color of your skin, your sexual preference, your disability, even the acne on your face, listen to me right now. Do not let your self-worth be defined by bullies. Learn from my experience, that the cruel words of one are nothing compared to the shouts [of support] of many,” she added.

Not surprisingly, her bold on-air attack quickly went viral, and Livingston and her husband were soon guests on Good Morning America. During their airtime on GMA, Thompson defended his wife as an outstanding role model in every way, including to their three young daughters. He noted that she has a thyroid issue that makes it hard for her to lose weight, but that she has run triathlons and had recently participated in a 5-K run.

This cause célèbre with Jennifer Livingston underscores the extent to which our culture is steeped in the extremely damaging fixation with physical beauty, looking young, and the message that thinness is part of an ideal beauty type. While Krause may have thought he was doing a good thing in “encouraging” Livingston to slim down because of her public persona and de facto role as an example to girls in the community, he was out of line to pass judgment on a woman he had never met on the basis of poundage.

He failed to even consider how many people struggle against excess weight for a variety of reasons, both medically and emotionally. It also reveals the shallowness of the diversity imperative, which fixates on gender and racial equality, but not size.

It is hard not to fall prey to our fixation on looks. In 2011, Americans spent more than $10 billion (yes, billion) on cosmetic procedures, from liposuction to Botox injections, according to the American Society for Aesthetic Plastic Surgery. Many of these services were purchased by job seekers worried that looking their age would hurt their chances of getting hired. That is sad as well as scary. While sensible people know better deep down, many of us still judge people based on looks, without considering the depth and dimensions of the person inside. No wonder there is increased bigotry and disdain against overweight individuals.

Livingston was hardly a vulnerable victim of someone more formidable than her.

On the other hand, Livingston’s assertion that she was bullied by the email writer is harder to accept. While she has become a sudden symbol for the anti-bullying brigade, Livingston was hardly a vulnerable victim of someone more formidable than her. In fact, her powerful and bold rebuttal proved she was more than equal to the task of answering back to harsh criticism.

In the process, she also garnered new-found prominence and become an inspiration to other plus-sized women who applaud her success as a TV anchor and cheer the fact that she has a loving and supportive husband and three children. Under these circumstances, I wouldn’t be surprised if it wasn’t Krause who might not be contemplating a move out of town.

Judaism teaches that our bodies were created by God and given to us to fulfill our potential during our lives. So yes, we absolutely should take care of our bodies and stay as healthy as we can. But our bodies are just the “housing” for the real people we are inside. We must know how to look at people beyond the superficial “skin deep” level before we can judge who the “real” role models in our society should be.

Anorexia and My Need for Perfection

Europe Needs to Confront its Anti-Semitism

Sports, Politics and Our Search for Meaning