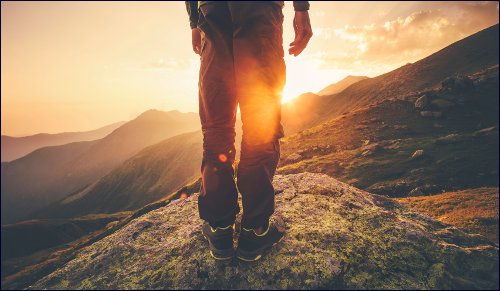 I’m no Abraham, but his act of walking in faith toward the unknown inspired me to do the same.

As the train slowly made its way northbound, leaving behind the commotion of Manhattan’s Grand Central Station and heading toward the serenity of the suburbs, my gaze out the window at the lush, autumnal scenery suddenly and sharply turned inwards.

The year was 1984, and although I was a mere 16 years old, I had been wrestling for weeks with a momentous question, the kind of potentially life-altering choice that I found both intriguing and intimidating: should I start to observe Shabbat? Of course, for a restless teenager with hectic hormones, it often seemed that every decision carried with it the weight of the universe, as though the cosmos itself would be forever altered should I opt to see The Karate Kid rather than Ghostbusters Saturday night at the cinema.

But I knew this was a qualitatively different dilemma, one that would affect all aspects of my life, ranging from my worldview to possibly even my character and personality.

Did I really want to go the more Orthodox route and become one of... them?

Growing up in a Conservative Jewish household, where Shabbat was celebrated but not strictly observed in the Halachic sense, did I really want to go the more Orthodox route and become one of... them? Despite attending Jewish day school and yeshiva high school, my best friends were all non-Orthodox, and we did lots of non-Orthodox things every Saturday, from watching sports on television to driving to a friend’s house to play tennis.

I didn’t understand the seeming obsession that Orthodox Jews had with all the minutiae of observance. Did it really matter if you declared a festival over at precisely 7:32pm? Or if you had a bowl of Lucky Charms cereal for breakfast with those delightfully delicious multi-colored marshmallows even though the box didn’t have a kosher symbol on it? I was proudly Jewish, passionately Zionist and pro-Israel, and hawkish in my political views. Wasn’t that enough? On Friday nights and holidays, we always said the Kiddush, sang songs and recited the Grace after Meals, and the following morning we would drive to shul. I wasn’t allowed to go out on Friday nights or on festivals, but that didn’t seem too overly burdensome.

All in all, it was a comfortably Jewish environment: not too demanding yet occasionally uplifting.

And then came that fateful Shavuot, in early June 1984, the aftermath of which would set off the philosophical neurons in my head, sparking large amounts of electrical impulses to surge through the synapses and give me no rest.

It was a holiday like any other, except that after synagogue, a friend and I decided to go for a drive. I remember purchasing some much-needed batteries, and we then proceeded to a deli that billed itself as kosher, even though it was open on the festival. After gorging on a succulent hot pastrami on rye, along with a hot dog, a mountain of French fries and some good ol’ fashioned Dr. Brown’s Black Cherry soda, I made my way home.

Boy, were my parents upset. “You know that in this house we do not go out on Friday nights or holidays,” my father said, berating me for violating the unwritten family code and asking me how I could do such a thing.

Resorting to some of that Judaic knowledge I had acquired in school, I replied somewhat irately: “What difference does it make? After all, Shabbat is holier than any holiday, and on Saturday afternoons we do what I please, so why should I be limited on Shavuot?” The discussion went nowhere, and yet I could not shake it. I was suddenly confronted with a stark reality: I was living a life that was neither intellectually consistent nor religiously sensible, simply picking and choosing based more on whim than on wisdom.

So I tried to push it out of my mind, banish it to some inner recess of the brain where chemistry, trigonometry and other unpleasant subjects went to die a forgotten death.

That summer, I went to Israel on a non-religious tour group. Having heard that Tisha B’Av eve at the Western Wall was a big social scene, I somehow convinced the group leader to take us there even though it wasn’t part of the program.

There was something so powerful about our people’s tradition that it was able to bring these disparate groups together.

As I made my way through the throngs of worshipers, two things struck me. First, I noticed various groups of Ethiopian, Russian, Yemenite and other Jews, all of whom appeared so different on the surface, with seemingly nothing in common to unite them. They spoke different languages, had diverse wardrobes and ate dissimilar foods.

And yet, there was something so powerful about our people’s tradition that it was able to bring these disparate groups together, at the same time and in the same place, and for the very same reason. It was an eye-opening glimpse for me of the power of Jewish history and the pull of Jewish destiny.

Then, I saw a group of black-clad Hassidim sitting in a circle, reading the Book of Lamentations. Never one to be intimidated by what could prove to be a culturally interesting experience, I went over and plopped down, jeans, T-shirt and all. Looking around the group, I noticed that several of the men were weeping, literally shedding tears, all because the Temple was destroyed some 1,900 years ago.

I shook my head in disbelief. After all, the newspaper is filled every day with human tragedies and natural disasters, most of which move readers far less than the outcome of the World Series. So why, I thought to myself, are these guys crying over a building that was felled two millennia ago? Is there something wrong with them? And then the answer hit me right in the mental equivalent of the gut: No, Michael. Perhaps there is something wrong with you. Maybe these guys are the ones who ‘get it’ and you are the one who doesn’t.

I decided that I could no longer endure the conflicting dichotomy that characterized my Jewishness.

And so, shortly thereafter, on that train ride through Westchester County, I decided that I could no longer endure the conflicting dichotomy that characterized my Jewishness, and when my mother picked me up, I announced somewhat off-handedly that I had decided to start keeping Shabbat.

What followed is a tale for another time, but when I awoke the next morning and made my way – on foot – to synagogue, the doubts came along for the walk.

Do you really want to do this, I thought to myself. “No more TV or video each Saturday? Are you nuts? “Dear God,” I wondered aloud, “are You sure You want me to do this?” I took my seat in the sanctuary and then, as if in answer to my question, the person reading the Torah began to recite the opening verse of the weekly portion, the same one that we read this week. It begins with the Creator telling Abraham to embark on a great journey to an unknown destination: “Lech lecha,” which literally means “go to yourself.”

A shudder went through me as the words sank in. I understood it to be a sign, an affirmation that not only must I follow this path toward the unknown that I had begun, but that ultimately it would take me to finding my true inner self.

That first step has led me down a winding trail, as I grew in observance, became a Baal Teshuva and embraced Orthodoxy. Naturally, there have been many challenges along the way. But when I look back now, 32 years later, having spent two-thirds of my life keeping Shabbat, I thank God for opening my eyes and for giving me this precious gift.

I’m no Abraham, but I’m gratified to say that his act of walking in faith toward the unknown inspired me to do the same.