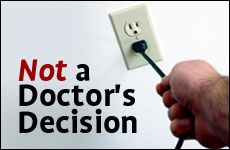 An assault on the concept of the sanctity of life.

A Winnipeg case currently winding its way to its grim conclusion pits the children of Samuel Golubchuk against doctors at the Salvation Army Grace General Hospital. According to the pleadings, Golubchuk's doctors informed his children that their 84-year-old father is "in the process of dying" and that they intended to hasten the process by removing his ventilation, and if that proved insufficient to kill him quickly, to also remove his feeding tube. In the event that the patient showed discomfort during these procedures, the chief of the hospital's ICU unit stated in his affidavit that he would administer morphine.

Golubchuk is an Orthodox Jew, as are his children. The latter have adamantly opposed his removal from the ventilator and feeding tube, on the grounds that Jewish law expressly forbids any action designed to shorten life, and that if their father could express his wishes, he would oppose the doctors acting to deliberately terminate his life.

The claim of absolute physician discretion to withdraw life-support would spell the end of any patient autonomy over end-of-life decisions.

In response, the director of the ICU informed Golubchuk's children that neither their father's wishes nor their own are relevant, and he would do whatever he decided was appropriate. Bill Olson, counsel for the ICU director, told the Canadian Broadcasting Company that physicians have the sole right to make decisions about treatment -- even if it goes against a patient's religious beliefs -- and that "there is no right to a continuation of treatment."

That position was supported by Dr. Jeff Blackner, executive director of the office of ethics of the Canadian Medical Association. He told Reuters: "[W]e want to make sure that clinical decisions are left to physicians and not judges." Doctors' decisions are made only with the "best interest of the individual patient at heart," he said, though he did not explain how that could be squared with the undisputed claim that this patient would oppose the doctors' decision. Meanwhile, an Angus Reid poll of Canadians showed that 68% supported leaving the final decision with the family.

The claim of absolute physician discretion to withdraw life-support advanced by the Canadian doctors would spell the end of any patient autonomy over end-of-life decisions. So-called living wills, which are recognized in many American states, and which allow a person to specify in advance who should make such decisions in the event of their incapacity, would be rendered nugatory.

Even those who would not wish to be maintained in a state of unconsciousness, and who do not share the religious beliefs of the Golubchuk family should fear the claim of moral omniscience made by Canadian doctors -- and not just because Josef Mengele was a doctor. As Professor Richard Weikart chillingly details in From Darwin to Hitler: Evolutionary Ethics, Eugenics, and Racism in Germany, Mengele's experiments on "inferior" Jewish children for the benefit of the Master Race have to be viewed in the context of German Social Darwinism in the seven decades leading up to the Nazi takeover.

In Weikart's estimate, a majority of German physicians and scientists subscribed to the naturalistic Darwinian world view and ideas that constituted a sustained assault on the traditional Judeo-Christian concept of the sanctity of life. Among those ideas are the claim that there is no fundamental distinction between humans and animals; human beings do not possess a soul that endows them with any rights or superiority to any other species; within the species homo sapiens, there are "inferior" and "superior" individuals, and inferior and superior races; and it is the iron will of nature that the species should evolve through the survival of the superior members and the death of the inferior.

In place of the sanctity of life, we now speak of the "quality of life" -- a term that explicitly assumes that some lives are worth more than others.

Darwin's cousin Francis Galton founded the modern eugenics movement on the basis of Darwinian arguments, and nowhere did eugenics catch on with greater enthusiasm than in Germany (though many prominent intellectuals in the United States, England and France were also enthusiastic supporters.) In Germany, many took the next step - from eugenics to involuntary euthanasia for the mentally ill and other defectives.

Ernest Haeckel, one of the most influential 19th-century German biologists, whose faked drawings of developing human embryos allegedly recapitulating the evolutionary path still feature prominently in college biology texts, argued for the killing of the mentally ill, lepers, those with incurable cancer, and cretins. As a safeguard, he too recommended a committee of physicians to pass judgment. Alfred Hoche, a professor of psychiatry at the University of Freiburg, justified shortening an inferior life if the insights gained would save better lives. "By giving up the conception of the divine image of humans under the influence of Darwinian thinkers," writes Hans-Walter Schmuhl, mainstream German thinkers came to view human life as "a piece of property" to be weighed against other pieces of property.

Just as Nazism gave anti-Semitism a bad name, so too did it discredit Social Darwinism. But just as anti-Semitism has reappeared, so has the assault on the concept of the sanctity of life. That assault is not limited to Princeton ethicist Peter Singer's defense of infanticide, euthanasia and bestiality on explicitly Darwinian grounds.

In place of the sanctity of life, we now speak of the "quality of life" -- a term that explicitly assumes that some lives are worth more than others.

There is even talk of the "duty to die" and clear the way for higher-quality lives, which is why the American Association of People with Disabilities has been actively involved in so many cases dealing with the doctors' right to terminate medical care. The rage for medical rationing in Canada, of which the Golubchuk case is but one example, derives from a desire not to waste resources on low-quality lives.

It would be a bitter irony if Percy Shulman, a Jewish judge in Winnipeg, were to grant Dr. Bojan Paunovic the right to end Samuel Golubchuk's life on the grounds that it lacks the requisite quality.

One of Nature's Great Mysteries