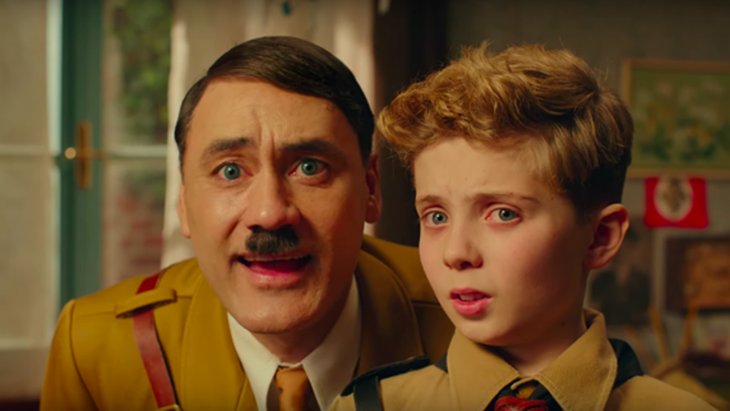 Award-winning director Taika Waititi skewers the banality of evil in his latest film.

It takes courage, imagination, and skill to satirize evil. Cutting evildoers down to size by showing them as stupid, inept, and self-defeating gives people the satisfaction of seeing evildoers not at their ferocious worst, but in the smallness of their souls.

Many artistic creators in film and television have demonstrated this courage, imagination and skill in parodying Adolph Hitler. Charlie Chaplain was the first with his 1940 film, The Great Dictator, which Chaplain wrote, directed, produced, scored, and starred in. The long-running television show Hogan’s Heroes (1967-1971), set during World War II, lampooned an inept and bumbling German colonel in charge of Stalag 13, filled with American resistance fighters in a POW camp who always got the better of the colonel. 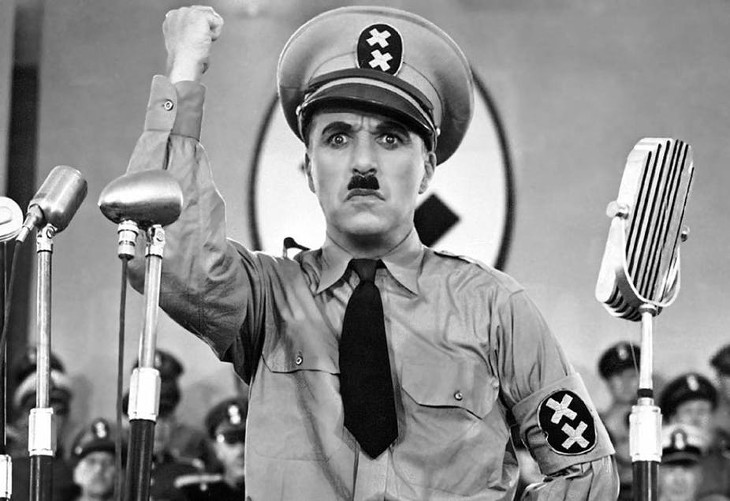 Nazi-spoofing continued with Mel Brooks’ 1967 film, The Producers, in which a pair of down-and-out theater producers concoct a wild scheme to make money out of a “sure-fire” Broadway failure. They decide on a musical comedy about the Third Reich, but their show, “Springtime for Hitler,” turns out to be a hit. After the initial shock of the premise, audiences loved laughing at Nazis. Who knew? More recently, the 1997 Italian film Life Is Beautiful poignantly illustrated a Jewish father’s efforts to shield his young son from the brutal realities of life in a concentration camp by pretending that everything was just a joke.

Now, Taika Waititi, director of the Oscar-nominated short film Two Cars, One Night, (2004), as well as Thor: Ragnarok (2017), has made his own contribution to the genre with Jojo Rabbit. The film focuses on ten-year-old Jojo, fanatically pro-Hitler and itching to join older Germans fighting the war. However, Jojo (played to perfection by Roman Griffin Davis) quickly discovers in a Hitler youth camp that the work of real soldiers involves a real-world cruelty that makes him recoil. Earnest and sweet, he earns the nickname “Jojo Rabbit” after he runs away from the challenge of killing a live rabbit. The youth camp’s leaders humiliate him for his weakness.

Waititi wrote, produced, directed, and co-stars in this film, playing Jojo’s imaginary best friend – Adolph Hitler. Waititi, who also goes by the surname of Cohen, considers himself to be a Polynesian Jew; his father is Maori and his mother is Jewish. He plays Hitler with great comic effect: mindlessly venomous, thin-skinned, oafish, easily rattled yet also easily derailed from his rants by Jojo’s common-sense logic.

While reviews of the movie are mixed, I watched it with great enjoyment and admiration, not only for the outstanding acting and directing, but also for the pointed parody of the Nazi regime, of Hitler himself, and the ironic laugh lines that arrive in the most unlikely situations.

Jojo lives with his mother, Rosie (Scarlett Johansson, who gives a superb performance). His older sister has died, and his father has been away under mysterious circumstances related to the war effort. Sidelined at home by an accident at the youth camp, Jojo hears unexplained noises upstairs, and to his shock, discovers that his mother is hiding a teenaged Jewish girl, Elsa (Thomasin McKenzie), in the attic. His enemy is in his very own house! And his mother complicit! 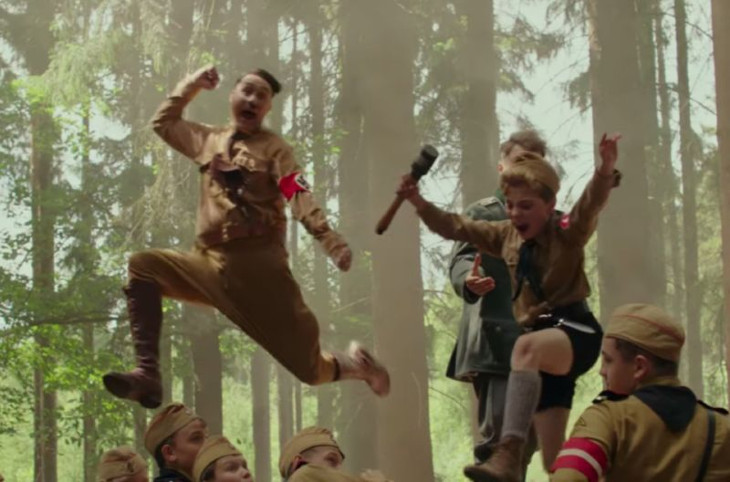 Expecting to meet some hideous horned creature that is the stuff of Nazi propaganda, Jojo at first tries to hurt Elsa, but he cannot overpower her either physically or psychologically. Elsa is no shy and quivering captive. Waititi has written her character as bold, beautiful, dignified, almost fearless. When Jojo asks her, “Tell me about your kind,” she answers tartly, “We’re just like you. Only human. We’re people who have wrestled with the angels!” Realizing her humanity and her strength, Jojo decides to try to understand her instead.

This movie is not about moral and ethical shades of gray; it’s about the stark divide between good and evil.

If at first Jojo is naively “in love” with Hitler, he soon learns where good and evil truly live. This movie is not about moral and ethical shades of gray; it’s about the stark divide between good and evil. The audience realizes from the beginning that Jojo will eventually learn that Jews were never his enemy; Hitler was. He will also learn to appreciate the risks his mother took, at her extreme peril, to hide Elsa.

The promotional materials for this film announce that it is “an anti-hate satire.” This is so obvious that it’s absurd to have to say so. From the first frame to the last, it is clear that Taika Waititi’s intent is to lampoon the mob mentality that can turn a “cultured” society into one that embraces lockstep bigotry, tyranny, and violence. Today, this labeling is a defensive measure, because the easily “triggered” have such a hard time making distinctions between authentic vitriol and parody. Thus, the label: It’s a parody, folks!

Waititi has infused satire at almost every turn. At the Nazi youth camp, Fraulein Rahn gleefully shouts to the youth, “It’s time to burn some books!” and the children cheer wildly. After Jojo first meets Elsa, his “friend” Hitler appears and sympathizes with the boy’s confusion, saying, “Jeez, that was intense.” Jojo asks him, “What am I going to do?” Hitler shrugs and says, “No idea.” And when the Allies pummel Germany with a final round of bombs, leaving the country in utter ruin, Jojo’s friend Yorki, the pudgy eleven-year-old who was conscripted into the army by the flailing Third Reich, looks at the rubble around them and says, “It’s definitely not a good time to be a Nazi.”

For all the spoofing going on, Jojo Rabbit is also a serious film. It shows – modestly and not overly graphically – the horrific cost of one of history’s most savage and tragic periods. The humor here also will not work for everyone; some people cannot abide any joking about the Nazi era. But I believe that for most people, this clever take-down of blind hatred and the mob mentality will be reassuring. Because even during our darkest hours when nothing else makes sense, finding a reason to laugh helps us feel that we, at least, are still in our right minds.

Star Trek and God
Why the Mezuzah is Placed on a Slant
Faith: the Axis Upon Which the Wheel of Science Turns
Love - Not Just About Chemicals Anymore!
Comments
MOST POPULAR IN Jewlarious
Our privacy policy