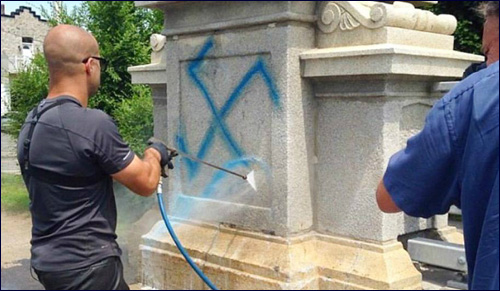 With graffiti-removal tools in hand, one Canadian is starting a movement to improve the world.

If you’re unhappy with the way things are, change them. That was the motivation behind Corey Fleischer’s Erasing Hate movement that seeks to eradicate hate speech in the form of vandalism across Canada, from swastikas to offensive racial slurs. Fleischer is a Canadian-based graffiti removal specialist and power-washer who dedicates his free time, skills and resources to create awareness about hate crime and anti-Semitism, and he’s inspiring a community of activists to improve society and abolish hate.

It all began one day when Fleischer was driving through downtown Montreal on his way to a job when he noticed a swastika overlooking a busy intersection. “I wish I could say I jumped out of the truck and began removing the swastika with the power-washing tools I had with me,” Corey Fleischer said in an interview with Aish.com, “but unfortunately that wasn’t what happened.” Instead Fleischer continued driving to his next work location, but something didn’t feel right. “The rest of the day I kept thinking about how I could have easily removed that hate crime, and I just kept driving.” 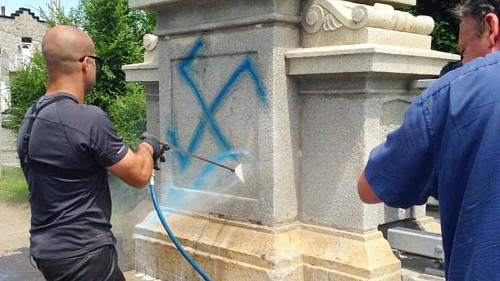 With regret hanging over him, Fleischer sent his crew home early and drove back to the location of the swastika to erase it away with his power-washing tools. That one act launched Fleischer’s movement that now has the attention of thousands of Canadians.

After that experience, Fleischer realized he could combat other hate instances across Montreal. He began his movement online, inspiring people to report any instances of hate crime or anti-Semitism across the city, and promised to have it removed within 24 hours, free of charge.

Fleischer voices his frustration toward the government’s response to hate instances which often forces the victim of vandalism to pay out of their own pocket. “Even though I myself own a graffiti removal company, Erasing Hate is here for the people, by the people.” 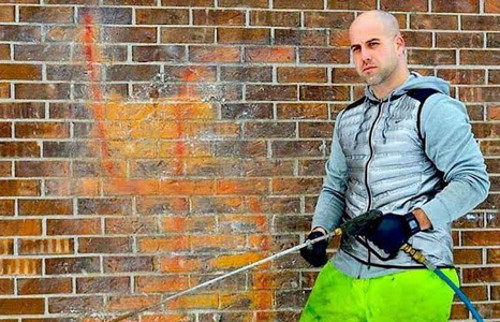 Fleischer is passionate about making a positive impact and vows to continue to fight for this cause in new ways to create awareness. Canadian news outlets have praised his work and he has earned him an honorary Community Service Award from the Canadian government. Erasing Hate has expanded across Canada and to some locations in the United States; Fleischer hopes to expand his movement to Europe next year.

Fleischer also speaks at schools across the country and creates workshops for Canada’s youth about hate crimes, believing that one of the best ways to create change is through education. Fleischer is proud of his Jewish heritage and sees his work with Erasing Hate as part of his personal connection to Judaism. “Growing up, I did not have any connection to Judaism, nor was I ever taught about events like the Holocaust,” he explains. Now, with Erasing Hate, he hopes to pay his experiences forward. “With this, I hope to educate other people in the ways that I never was. If my work speaks to just one person, than it will have been worth my time.”

Fleischer is coming out with an Erasing Hate mobile app that enables users to take photos of hate vandalism in many locations in the United States and Canada, and it automatically pinpoints the location of the hate instance. Within 24 hours, Fleischer or one of his volunteers will have it removed. 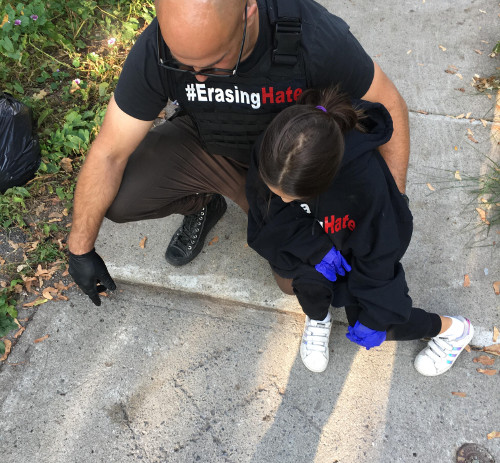 “I’m extremely proud about how far Erasing Hate has come and that it has inspired so many Canadians to make a change,” Fleischer says. “It’s important to realize that things aren’t going to change unless someone stands up and tells people why that thing is worth caring about.”

Corey Fleischer reminds us that change often doesn’t require political power or financial wealth. Sometimes one man with nothing but a power-washer and determination can create a better world for everyone.

Mel Gibson and the Jews
Near Death Experience Panel
The Western Wall: The Heart of the World
Ask the Right Question: Tisha B’Av
Comments
MOST POPULAR IN Current Issues
Our privacy policy
Aish.com Is Looking for Great Writers