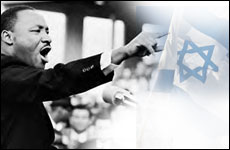 Where is our dream today?

This coming week will be the 50th anniversary of Martin Luther King’s historical speech in Washington D.C. Many people don’t know that MLK did not prepare the “I have a dream” parts of his speech. He made up those paragraphs on the spot as he stood before thousands of people who came to rally for the ideals of freedom and equality.

“I am happy to join with you today in what will go down in history as the greatest demonstration for freedom in the history of our nation. I have a dream that one day this nation will rise up and live out the true meaning of its creed: ‘We hold these truths to be self–evident: that all men are created equal.’ I have a dream that my four children will one day live in a nation where they will not be judged by the color of their skin but by the content of their character. I have a dream today.”

There were hundreds of Jews that day in August marching in Washington D.C. to support the African American fight for freedom. We joined in protests, and we were a part of the civil rights groups in universities across the nation. Judaism teaches that every person is created in the image of God, and we have always been willing to fight for this ideal.

Over the years as Jews have become more integrated and comfortable in American society, it is rare to find discrimination against us just for being Jewish. Today we can be the heads of the emergency rooms and the congressmen and the top CEOs in the country. But anti-Semitism is stronger than ever; it just sounds different.

It sounds like this: I have nothing against Jews, but Israel is messing everything up. If only Israel would stop fighting, there would be peace in the Middle East. If they would just stop building… If Israel would just give back the land already… It’s not called anti-Semitism; we call it Middle East politics. We call it the ‘peace process.’

I have a dream that one day we will know the difference between illusion and truth. Between comfort and happiness. That we will come to understand that we cannot make changes without pain. That we cannot achieve anything without sacrifice.

We are all created in His image; let us live up to this incredible potential. I have a dream today.

3 Tips for A Great Yom Kippur

Hijacking Chanukah
Don’t Believe in Other Gods Versus God is One
Seeing Without Eyes
Why Shouldn’t We Eat Whatever We Want?
Comments
MOST POPULAR IN Israel
Our privacy policy
Aish.com Is Looking for Great Writers