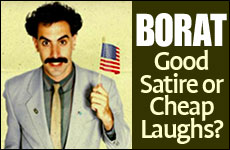 The newly released film has been hailed as a satiric masterpiece. Does it live up to its hype?

In September 1939, World War II began with Adolf Hitler's invasion of Poland. One week later, Charlie Chaplin started filming one of the most audacious political satires of all time: The Great Dictator. It was remarkable because it lampooned Hitler and Nazism at a time when America was still officially at peace with Germany. After receiving reports of how Jews were being treated in Hitler's Germany, Chaplin insisted on releasing the film. "I was determined to go ahead, for Hitler must be laughed at," said Chaplin.

Some argue that by satirizing the German situation, Chaplin was able to show the American audience how twisted both Hitler and his Nazi party were, and awaken the United States to join the war effort and defeat his wicked ideology. Reportedly, President Franklin Delano Roosevelt sent a personal envoy to encourage the film maker to forge ahead with the project.

Fast forward to 2006 and the world appears to be on the verge of another boiling cauldron of anti-Semitism, racism and hate. Could this be the right time for yet another bold satire film to help expose the bigotry of those espousing hate throughout the world?

Some suggest that the recent release of the film Borat: Cultural Learnings of America for Make Benefit Glorious Nation of Kazakhstan, achieves this end. It is the brain child of Jewish comedian Sacha Baron Cohen, whose character, Borat, is a lecherous, Jew-hating, misogynistic journalist from a village in Kazakhstan, who with his obese, hirsute producer in tow, sets out for the United States, ostensibly to do a documentary for their home audience about the American way of life. He leaves his village in a horse drawn car just ahead of a traditional Kazakh festival -- "the running of the Jew," loosely derived from the running of the bulls which takes place yearly in Spain.

Arriving in New York City, Borat immediately makes himself at home. He washes his face in the toilet bowl of his hotel room, attempts to embrace strangers on the subway who respond by threatening him with physical violence, carries with him a live chicken in a suitcase which he opens at the most inappropriate times, and is unabashedly crude in public. He then proceeds to the Deep South, where he makes his way to a rodeo, addressing the crowd saying, "We support your war of terror!" While staying at a bed and breakfast run by a kindly, elderly Jewish couple, Borat and his sidekick throw money at two cockroaches they fearfully believe to be the morphed couple, and then flee for their lives. At a gun shop he asks the unsuspecting owner which gun would be best to kill a Jew. "Nine millimeter bullets," is the response, shocking in its casual honesty.

On a previous Borat escapade he visits a ranch in Texas, where the owner reveals himself to be so anti-Semitic as to believe that Hitler's Final Solution was a necessity for Germany. He further implies (with the egging on of Borat) that he would have no problem running a ranch where people can hunt, in Borat's words, "deer... then Jew."

Truly good satire can make people reevaluate how they view the world and even commit to changing their beliefs and actions.

Satire is a powerful comedic tool that exposes the bigots by holding up their behavior to ridicule. The Anti Defamation League, while being concerned about "the character's boastful expressions of anti-Semitism and stereotyping of others," nonetheless is hopeful that people will understand Baron Cohen's comedic technique, which is "to use humor to unmask the absurd and irrational side of anti-Semitism and other phobias born of ignorance and fear." Admittedly, Borat at times achieves this end.

But truly good satire, of the Charlie Chaplin variety, goes even further. It makes people reevaluate how they view the world and even commit to changing their beliefs and actions. This, Borat by no means achieves.

Borat devolves into bathroom humor that sinks to levels so low that it can only be termed grotesque. It succumbs to the all too common temptation that most modern comedies seem to fall prey to – it assumes most viewers want toilet humor. By supplanting edgy, thoughtful comic satire with frat party antics, Borat squanders a golden opportunity. Instead of walking away from the movie and thinking about how ridiculous and dangerous racist ideas and those who hold them are, viewers will most likely come away thinking about why the longest scene in the movie involved Borat wrestling with his producer at a convention of insurance agents.

The President of Iran is calling for the elimination of the State of Israel. Attacks against Jews are rising at an alarming pace. Israel advocates and a handful of activists are trying to bring this issue to the forefront of the world's attention, but have little to show for their efforts. Now is the time for creative ways to get this message across, and satire is one of the best methods. Unfortunately, in 2006 all we got was Borat, when what we truly need is Charlie Chaplin.

My Life as a Jewish Cartoon
In the Shadow of David and Goliath
Where Do the Laws of Nature Come From?
Saadiah Gaon, Rashi and Maimonides: How Three Rabbis Revolutionized Judaism
Comments