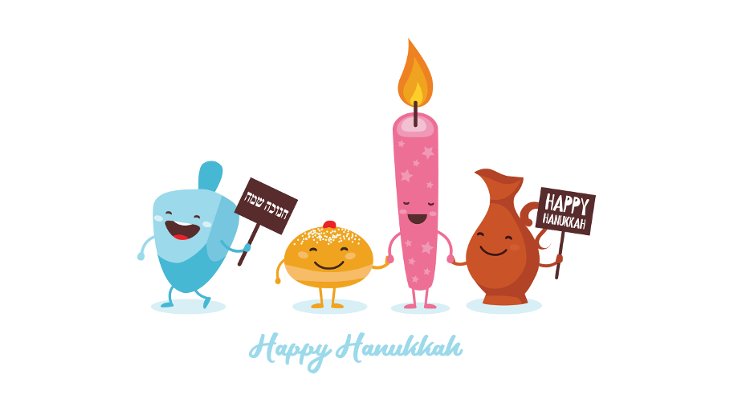 Silent Night? I should be so lucky!

As we all know, Hanukkah can have different meanings to different people. To some, it is a Jewish festival commemorating the rededication of the Second Temple in Jerusalem at the time of the Maccabean Revolt against the Seleucid Empire. To others, it is one of the most festive Jewish celebrations with family, friends, food, gifts and games. To me, it’s all of that, plus a perfect opportunity to share some of the best of the holiday’s humor.

Miriam goes to the post office to buy stamps for her Hanukkah cards one year. She says to the cashier, "Please may I have 50 Hanukkah stamps?"

The cashier asks, "What denomination?"

Last December, a grandmother was giving directions to her grown grandson who was coming to visit with his wife. “You come to the front door of the apartment complex. I am in apartment 14T.” She continued, “There is a big panel at the door. With your elbow push button 14T. I will buzz you in. Come inside, the elevator is on the right. Get in, and with your elbow hit 14. When you get out I am on the left. With your elbow, hit my doorbell.” “Grandma, that sounds easy,” replied the grandson, “but why am I hitting all these buttons with my elbow”? To which she answered, “You’re coming empty handed?”

During the first day of Hanukkah, two elderly Jewish men were sitting in a wonderful deli frequented almost exclusively by Jews in New York City. They were talking amongst themselves in Yiddish – the colorful language of Jews who came over from Eastern Europe A Chinese waiter, only one year in New York, came up and in fluent impeccable Yiddish asked them if everything was okay and if they were enjoying the holiday. The Jewish men were dumbfounded. “Where did he ever learn such perfect Yiddish?” they both thought. After they paid the bill they asked the restaurant manager, an old friend of theirs, “Where did our waiter learn such fabulous Yiddish?” The manager looked around and leaned in so no one else will hear and said… “Shhhh. He thinks we’re teaching him English.”

Chanukah Songs that Never Quite Caught On

Which hand is best to light the menorah with?

Neither, it’s best to light it with a candle.

How can you recognize a Hanukkah hippie?

He’s the one with his hair in dreidel-locks.

How much Hanukkah gelt did the skunk get?

What’s the best Hanukkah gift for the person who has everything?

What do you call a speck that falls into the latke pan?

Why don’t we eat clowns at Hanukkah?

Because they taste funny.

What’s the difference between Hanukkah and a dragon?

One lasts for eight nights, the other sometimes ate knights.

What’s the best thing to put into the sufganiyot?

What did the candles say when the menorah complained about getting too hot?

What did the older Hanukkah candle say to the younger one?

You’re too young to smoke.

Why was the broom late to the Hanukkah party?

A Jewish guy's mother gives him two sweaters for Hanukkah. The next time he visits her, he makes sure to wear one. As he walks into the house, his mother frowns and asks, "What – you didn't like the other one?"

"Play it again, Sam" – H. Bogart, Casablanca
by Joe Hample (sung to the tune of "As Time Goes By" from "Casablanca")

You must remember this,
A bris is still a bris,
A chai is just a chai.
Pastrami still belongs on rye,
As time goes by.

With holidays in view,
A Jew is still a Jew,
On that you can rely.
No matter if we eat tofu
As time goes by.

Old shtetl customs, never out of date.
All those potatoes someone has to grate.
One flame in the window,
keep counting till there's eight
To light the winter sky.

In the Bronx or in the Mission,
It's still the same tradition,
That no one can deny.
We roam, but we recall our birthright,
As time goes by.

Dreidels and chocolate, never out of date.
Ancient Semitic glories to relate.
Blue-and-white giftwrap, ain't this country great,
And festive chazerai!
It's still the same old Torah,
It's still the same menorah,
We've latkes still to fry.
December's when I feel most Jewish,
As time goes by.

It was Hanukkah and the tiny village was in fear of not having any latkes because
they had run out of flour.

Rudi, the rabbi, was called upon to help solve the problem. He said, "Don't worry, you can substitute matzo meal for the flour and the latkes will be just as delicious!"