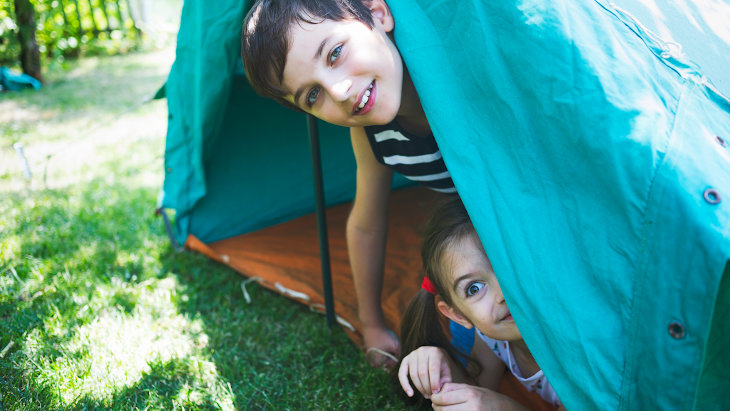 Don’t know what to do with your kid this summer? How about a backyard camp?

The strange thing about Jewish backyard camp is that many Jews with backyards do not use them very often. In fact, most Jews prefer gazing at their backyards while lounging indoors. There are a myriad of reasons as to why many Jews do not spend more time in their backyards, including but not limited to, flies, gnats, bees, wasps, hornets, spiders and ticks. Other reasons as to why many Jews avoid the outdoors include dirt, dust, muck, mud, slush and schmutz. Most Jews are highly schmutz-sensitive and are quick to point out if they see someone who has any schmutz, no matter how minuscule the amount, on their person. Jews can spot schmutz almost as quickly as they can spot cholent at a hot kiddush. In many ways, backyard camp is like a Schmutz Woodstock where kids come together to actually celebrate filth. In other words, if your children return from backyard camp without a smudge, that means they were neglected.

Backyard camp is a wonderful opportunity to enjoy a healthy dose of sunshine. Many parents, as a precaution, lather their children in enough suntan lotion to cover a sukkah, which is understandable given the potential negative effects of solar exposure. But, perhaps another good idea is to explain to your children the difference between a suntan and a sunburn, which – in terms of severity – is similar to the difference between (i) nosy and nudnik, (ii) shpatzir and schlep and (iii) nosher and chazzer.

Some backyard camps feature equipment such as trampolines, which is crazy when you consider the frightening trampoline injury statistics. Indeed, it is surprising when a child uses a trampoline and does not get injured. It’s more surprising than when a child chooses a book over television or chooses bar mitzvah lessons over Little League. The world definitely would be a safer place without trampolines; it also would be a safer place without wedding-related chair-liftings.

While kids will do backflips and backspins for the chance to attend backyard camp, you will have quite a backlash, and many will back out, if you try sending them to backstab camp, backfire camp or backache camp. Of course, for kids who enjoy theatre, backstage camp is a good idea and for kids who enjoy eight-second violations, backcourt camp is ideal. For kids who enjoy taking a position and then withdrawing it, backpedal camp is for them.

Final thought: A sleepover backyard camp is almost as nonsensical as a sleepaway day camp.

What's the Big Idea?
It Takes A Lot Of Faith To Be An Atheist
How Instagram Brought Back This Nostalgic Soup
What Makes Eli Run?
Comments
MOST POPULAR IN Jewlarious
Our privacy policy