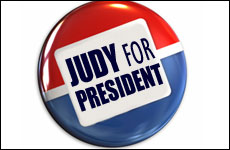 Today I announce my candidacy for president of the United States. My motto: "Opinion over Experience”.

Today I announce my candidacy for president of the United States as the nominee of the Maven Party. Our motto is: "Opinion over Experience." Am I too late, having missed most of the debates and lacking grassroots support across the country? Probably. But this nation is still hungry for someone who hasn’t waffled over the issues, someone who isn’t so punch-drunk with exhaustion that they keep saying dumb things they need to apologize for the next day. Unlike those weary candidates, I am rested, ready, and armed with several new American flag lapel pins.

Admittedly, I have several disadvantages as a presidential candidate. For one, my father never worked in a steel mill. Second, I am vertically challenged, and historically the tallest candidate usually wins. This means that at this point I could only beat Dennis Kucinich, who isn’t even running this time. Finally, my campaign war chest only has $312.87. But this campaign is about restoring fiscal discipline to the government, so if I can run a campaign with only $312.87, I can surely run the federal government for less than $40 bazillion.

Finally, what I may lack in government experience I make up for in confidence and moxie. Here are some of my policy plans:

Federal budget: Other candidates talk a good game of getting rid of “pork,” but only a president who will have four sets of dishes in the White House (meat and dairy for both chometz and Passover) can credibly claim to excise anything that oinks from spending bills. Similarly, launching an insurgency candidacy at this stage has saved my campaign at least $120 million. This is exactly the kind of fiscal discipline I will bring to the Oval Office.

Tax policy: Billionaires like Warren Buffet who feel taxes are not high enough will receive emails making it easy for them to pony up voluntary contributions to the Internal Revenue Service via PayPal. Be my guest, Warren.

Foreign policy: Anyone who threatens Israel will have to answer to me, as well as the combined powers of the United States Navy, Air Force, Army and Marines. And if Iran doesn’t knock it off, we will consider a no-state solution for them. Got that?

Health care: The number of Americans lacking coverage is scandalous, so I will offer tax credits for everyone who wears at least three-quarter-inch sleeves on their shirts. This will reduce the incidence of colds and flu, as well as needless trips to the doctor. My economic advisors estimate that adding to clothing coverage will reduce overall health care costs by up to $23 billion by 2115. Also, if everyone would just listen to me and eat more green vegetables, we’d all get sick less.

Climate Change: Up a degree, down a degree. What really is the problem here?

Education: Under a Gruen administration, U.S. schoolchildren will be trained to only use  the word “like” when they mean to convey that a) something is similar to something else or b) that they admire or approve of something. Schools that don’t help in eradicating this verbal tic among the nation’s youth will lose federal funding.

I am prepared to face hecklers for some of my more controversial positions, but this doesn’t scare me – I have teenagers. So now I’m off to the campaign trail. Wish me luck.

On the Campaign Trail

Buttermilk, Kansas – This campaign business is harder than I had imagined. I thought they’d be thrilled to get me to speak in the high school gym here in sleepy Buttermilk, since none of the other candidates have deigned to stop within 200 miles of here. True, nearly 60 folks turned out to see me in the high school gym -- better than I drew at my last book signing at a Hadassah group. And they loved my proposals for mandating tax credits for new cotton strippers and other farm equipment, but things got sticky when a burly guy decked out in a Jim Beam t-shirt and jeans desperately crying out for a belt demanded that I explain my plan to balance innovation with regulation in the mortgage lending industry. That just figured. They see their first Jew and they think she’s Alan Greenspan. I artfully changed the subject by focusing on my support for “conceal-and-carry” laws, which made Jim Beam applaud wildly. Phew.

Badgad, Kentucky – My campaign rally and highlights at the Look 'N Sharp salon was well-received, but when I’m president, I may levy a 15 percent tax increase on any business substituting single letters for entire words in their names.

Knockemstiff, Ohio – My campaign manager failed to notice that no one has actually lived in Knockemstiff since 1923. I was about to fire him for sending me here, but then, a miracle! As I walked down the wide, dusty, lonely road, narrowly avoiding a collision with a  tumbleweed, I saw a vision: a Chabad house! I thought I was hallucinating, but sure enough a young bearded young man came out of the building and whispered, "A lantzman! I knew the Rebbe didn't send me here for nothing!"

I hadn’t had a good meal in weeks, so over a hot kosher chicken dinner we schmoozed as he showed me plans for the Knockemstiff day school, kollel and mikvah. I couldn't help but ask him, "Why Knockemstiff? It's a ghost town!" He shrugged and said, "Nu? Las Vegas was once a ghost town, too."

Scalp Level, Pennsylvania – The wide open spaces of my campaign stops, at first so invigorating, are getting on my nerves. I never realized that the stress of city life actually released feel-good endorphins, now in dangerously short supply in my system. I tried to stay upbeat and on message at Joline’s Real Good Food café, where I secured the votes of all three customers after handing out copies of my recipe for Crock-Pot beef stew.

Being on the road has caused some trouble at home, however. In the middle of giving speeches on foreign policy, I have received texts from my kids complaining that nobody has any clean socks. Additionally, my prolonged absence has put me in carpool debt to three other mothers until the spring of 2016. However, if I win, I'm sure I can get the Secret Service to do it for me. I am considering offering Romney and Obama my availability for the Supreme Court if I bow out gracefully now, before my candidacy becomes a real threat. I am so perfect for the Supreme Court. I have an opinion on everything!

Egypt, Texas – Here at Bud's Antique Car Restoration Shop and Swap Meet, I deliver a real stem-winder of a speech, full of passion, patriotism, and new proposals to revive the housing market. I palmed a fiver on a kid beforehand to begin a rousing chorus of "USA! USA!" when I gave him a secret signal. He performed ably, the crowd dutifully following his lead. Handing out recipe cards for my beef stew has also been a stroke of genius. It creates a bond between me and the women out in the heartland, though I still don’t know how to answer them when they ask, "How do you think it would work with pork?"

My campaign coffers are only up to $2,398.07, but I will trudge on to Frog Eye, Alabama, Big Chimney, West Virginia, and Noodle, Texas. Why not? My speeches are slowly getting coverage via YouTube, the kids are learning to manage their own laundry, and people seem to admire the fact that I am truly a Washington outsider. Sure, it would still be a miracle if I became the first Jewish woman president. But the Almighty likes performing miracles for Jews. Why not for me?

People You See in Shul on The High Holidays

U.N. Demands Israel Supply Electricity, Rockets, to Hamas
It Takes A Lot Of Faith To Be An Atheist
How Instagram Brought Back This Nostalgic Soup
What Makes Eli Run?
Comments
MOST POPULAR IN Jewlarious
Our privacy policy