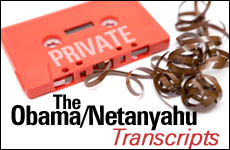 JEWLARIOUS SATIRE – Israeli Prime Minister Benjamin Netanyahu and his delegation recently visited President Barack Obama at the White House. They spoke privately of many things, including the Iranian nuclear threat, the bloodshed occurring in Syria, the democratic transition happening in Egypt, and how to bring about a calmer set of discussions between the Israelis and the Palestinians and arrive at a peaceful resolution to that longstanding conflict.

This is all important, historical, fascinating stuff. I’ve always been equally interested, though, in the things world leaders say to one another in their private moments, after the reporters and cameras are gone – the more human things. We usually are not privy to these private utterances until years after the world leaders leave office and write their memoirs – assuming they even choose to include such private moments. But readers of my column are fortunate because as it turns out, the White House tapes every moment of every meeting and somehow, the entire Obama-Netanyahu recording made its way to me.

What follows, then, are not the typical world leader discussions about politics, economics, violence, peace talks, and how best to deal with leaders of other nations. No, this is simply a selection of the utterances of two men, relaxed, off their guard, attempting to relate to one another in a very human fashion. Perhaps the connection they forge doing so influenced and informed their communication once they got back to the political business at hand. In any case, this is a fascinating look at two of the world’s most powerful leaders – off the clock, just being guys.

NETANYAHU: Please, call me “Benjamin.” Although, my friends refer to me by my nickname, “Bibi.”

OBAMA: Then I should call you –

OBAMA: Okay, Benjamin. I was just curious – what do you do outside of all your Prime Minister duties?

OBAMA: That’s all very impressive, but I meant in your own private time, what do you do for fun? For example, I enjoy playing basketball, doing family activities with Michelle and the kids, and playing with our dog, Bo, who’s a neutered male Portuguese Water Dog. But then, in a way, aren’t we all?

NETANYAHU: Ah. I see you try to make a joke.

NETANYAHU: I suppose the most fun I have these days is my writing.

OBAMA: Well, writing can be very relaxing. What do you write?

OBAMA: I’m sensing a common theme in your work.

NETANYAHU: Living in a place like Israel, matters of life and death have always been a priority for me.

OBAMA: I admire you for that. The closest I’ve come to death is when I forgot Michelle’s birthday one year. I slept on the couch for a week.

NETANYAHU: I feel your pain. “Been there, done that,” as you Americans say. I use Outlook Reminders to keep me off the couch.

NETANYAHU: Thank you for that delicious lunch. And don’t think I didn’t notice the Mizrahi, Sephardic, and Ashkenazi styles of cooking, along with the Moroccan Jewish, Iraqi Jewish, Ethiopian Jewish, Indian Jewish, Iranian Jewish and Yemeni Jewish influences.

OBAMA: Yeah, you really shoveled down those kneidlach. Dianne Feinstein taught me that one. We wanted to cover all the Israeli cuisine bases, since it’s such a rich culture. So we hired an expert kosher chef and told him to go to town. Say, what exactly does “kosher” mean? Joe Lieberman never got back to me about that.

NETANYAHU: It means “fit or allowed to be eaten.” Kosher foods are those that conform to the regulations of Jewish law. Reasons for food not being kosher include the presence of ingredients derived from non-kosher animals or from kosher animals that were not slaughtered in the ritually proper manner, a mixture of meat and milk, produced without proper supervision, the use of produce from Israel that has not been tithed, or the use of non-kosher cooking utensils and machinery. And we have separate sets of dishes for meat and dairy meals.

NETANYAHU: It may seem like a lot and very restrictive at first, but once it becomes part of your life, it’s just second nature and really makes perfect sense.

OBAMA: I suppose so. Man, this is going to make me think twice the next time I sit down to a plate of barbequed pork ribs! No offence.

NETANYAHU: Who doesn’t enjoy a good joke? Except maybe my mother-in-law. May she rest in peace.

OBAMA: I’m sorry for your loss.

A man goes to a psychiatrist and says, "Doc, my brother's crazy, he thinks he's a chicken." The doctor says, "Why don't you turn him in?" The guy says, "We would. But we need the eggs."

NETANYAHU: That’s a good one. Here’s one for you…

A guy is sitting at home when he hears a knock at the door. He opens the door and sees a snail on the porch. He picks up the snail and throws it as far as he can. Three years later, there’s a knock on the door. He opens it and sees the same snail. The snail says "What the heck was that all about?"

OBAMA: Wonderful. Maybe we should team up and tour with a comedy act. I can also sing.

NETANYAHU: I heard you singing on CNN. I think it would be wise for us both to keep our day jobs.

OBAMA: Fair enough. Say, can I offer you some brandy and a cigar, maybe a slice of Hadassah Lieberman’s brisket?

NETANYAHU: Finally, these talks are getting someplace!

Micronesian Academics Boycott British Academics over Academic Boycott of Israel
Korach 5782: Visit to Lift the Spirit
That Time The Ivy League Found A Way To Limit Jewish Enrollment
Would You Rather Be Right or Happy?
Comments
MOST POPULAR IN Jewlarious
Our privacy policy