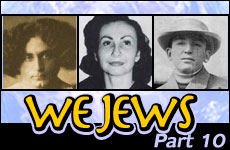 Jewish athletes from sports that are just a bissel “exotic.”

Weirdly surprising? Wait, I’m just beginning. We Jews have had our share of unusual victories. True, most sports – especially slightly odd ones –aren’t #1 on our children’s “to do” list. We Jews prefer Yiddishe kops to protective cups! But one, Bethel Solomons (1885-1965), did both. Solomons played rugby for Ireland ten times from 1908 to 1910 — then became a leading gynecologist! Or, our child could choose to be a professional eater? (Okay, that one’s a mixed blessing.) Here are some more of my favorite MOT (member of the tribe) athletes from sports that are just a bissel “exotic.”

America's leading jockey before the Civil War was Jacob Pincus (1838-1918) who started to giddy up in 1852. Pincus became a trainer and in 1881, saddled the first American-bred horse to win England's Epsom Derby. During the early 1900s, the best Jewish jockey was probably Walter Miller who rode over 1,000 winners during one four-year period.

Philo Jacobi, the publisher of The Hebrew, an early Jewish San Francisco newspaper, represented the American Sharpshooters Association of New York, and won the Berlin shooting championship in 1868.

Superman? Feh. Joseph Greenstein, a.k.a. the Mighty Atom, performed feats of strength from the 1920s to the 1970s. A sickly child from Russia, he became fascinated with circus strongmen, when he came to America. So at 17, he turned himself into one! A born showman, in 1926, he astounded his audience when, at Newark Airport he stopped a small plane from moving, by tying his hair to its tail! He continued doing stunts for Zionist causes into old age, and died in his eighties in the late 1970s.

He was born Shuki Rosenzweig, in Jerusalem. After Thai boxing magnate Puyay Now took Shuki under his wing, he became a champion Thai boxer! He fights under the name "Shuki Sit.Puyaynow," which means protégé of Chief Now.

Sidney Franklin, born Frumkin, did what probably no other Jew had done before. He was the first non-Latin successful bullfighter! During the 1920's and thirties, the Brooklynite was hailed as one of Mexico’s most celebrated matadors! Why? Maybe to hang out with bull-fighting fan, Ernest Hemingway. Another Jew, Randy Sasson, followed in Franklin’s footsteps, fighting bulls in Colombia.

(And you thought only Superman was into red capes!)

When you think of bowling enthusiasts, We Jews don’t jump to mind. But creating it, then owning the equipment? That’s another story. The father of modern bowling was MOT, Louis B. Stein, born in 1858. Stein instituted the 300 score and 16 pound ball as standard. He was elected to the American Bowling Congress Hall of Fame, Pioneers, in 1997. The next time you bowl a strike, think of John M. Brunswick -- his name is all over his bowling and billiard equipment. Of course. When you think Brunswick, you think bowling balls, and alleys – supplied by the Corporation founded by the Jewish entrepreneur.

Table tennis, organized as a sport in the 1920s, proved very popular with Jews. Lady Swaythling (1879-1965), president of the English Table Tennis Federation, donated the men's world team cup (1926) which bears her name. Her son, Ivor Montagu, was the first chairman of the Table Tennis International Federation. Marcus Schussheim was the first American champion (1931).

One of the greatest “ping pong” players was Romanian table tennis great, Angelica Rozeanu. She paddled and served her way to 17 world titles, taking her first international competition in 1938 at the Hungarian Open. During the 1950s she captured win after win. In 1960, Rozeanu moved to Israel, where she became a coach. She’s honored in both the Jewish Sports Hall of Fame and the Table Tennis Hall of fame. In 1998, she was cited in the “Guinness Book of World Records” for holding the most women’s singles World Champion wins (six).

Surf’s up for Shaun Tomson, born in 1955 in South Africa. Tomson captured more international tour victories (including Pro-Surfing's World Champion, 1977) than any other competitor from 1976 to 1985. Voted South African Sportsman of the Year in 1978, he was also featured on the cover by Surfer Magazine! Tomson’s not the only Jew “making waves.” In 1972, Dr. Dorian Paskowitz founded pro surf training camps stretching from California to Fiji.

The Jewish Sports Hall of Fame was founded in 1978 at the Wingate Institute for Physical Education, near Natanya, Israel, with a branch in Los Angeles. The following were among the inaugural inductees. See if you can match the player to his or her respective sport. Come on, no peaking:

Top Jewlarious Hits of 2007
Near Death Experience Panel
The Western Wall: The Heart of the World
Ask the Right Question: Tisha B’Av
Comments
MOST POPULAR IN Jewlarious
Our privacy policy
Aish.com Is Looking for Great Writers