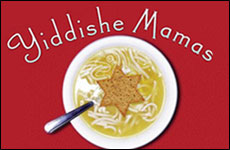 An excerpt from a book about Jewish mothers, and the jokes we tell about them.

Like a good tsibeleh (onion) we Jews are a complex pastiche, layered with strands of oys running through the joys. We do know that suffering is involved. Imagine for a moment Jews without humor. We'd have jumped off that roof with the Fiddler.

The Jewish joke is (obviously) about something Jewish and almost everything is fodder. It's democratic and yes, antiauthoritarian. Anyone, and anything, is treated with the same ironic wit.

Jewish Mother:  "Hello, operator! Give me the manager from the fancy-dancy room service."

Jewish Mother:  "This is room 402, Mister Room Service. I vant to order breakfast."

Jewish Mother:  "For me, I vant a glass orange juice mit pits. The toast should be burned, and – "

Manager:  "Madam, I can't fill an order like that!"

Jewish Mother:  "Aha! You did yesterday!"

Jewish jokes often involve a canny, even convoluted or loony use of logic, irony, and surprise or the quick turn-around.

Sophie demanded of Hannah a pot which she claimed was never returned to her to make Sabbath dinner for her family.

"In the first place, I never took a pot from you!"

"In the second place, it was an old pot!"

"And in the third place, I gave it back to you in better condition than when I took it from you!"

The jokes we tell offer insight into how we see ourselves in society and in the world. It's been suggested that as outsiders, better to give ourselves a zetz (punch) first. Jews are in the position of having been persecuted, while feeling quite superior intellectually, which leads to humor over what we consider to be absurdities, unfairness, and pomposity.

A rabbi in the hospital received a large vase of flowers with the following note: "The congregation wishes you a full and speedy recovery – by a vote of 212 to 74."

Jewish mothers have always been fodder for Jewish jokes. But, some feel that today, we've become a Jewish joke. And no matter how much truth there is in the ethno-type, many are still offended.

A bus with 30 Hadassah Ladies turned over and were dispatched to heaven. Unfortunately the computers were down, so God had to ask Satan to provide temporary housing. Soon after, He received an urgent telephone call from Satan telling Him to take the women off his hands.

Satan replied, "Those Hadassah Ladies are ruining my whole set-up. Only two hours and already they raised $100,000 for an air conditioning system!"

Who's doing the telling makes a large difference to Jewish mothers, indeed most Jews. If a fellow Jew is the "who" we trust motive. If a non-Jew tells the same story, we get a shtikl (little) anxious. "Why is he telling me this?" we wonder. "OK, it's because I'm Jewish and thought I'd find it funny – but – where did he hear it? From some anti-Semitic friend? Why does he know it?

Personally, I've known very few non-Jews who actually tell a Jewish joke well. They lack the DNA to own it, tell it right, sell it, or even understand it because they lack a Yiddishe kop. Telling a Jewish joke is more than a set-up and punch line. It's an experience!

So as my service to you, please enjoy the "experience" of some of my favorite Jewish jokes:

Rachel, Sheva and Rosalie visited their friend Gittel, mother of four, who was laid up with a bad back.

"Darling," said Rosalie. "We'll pray for you every night!" as the other women nodded.

"Every night, instead," said Gittel, "wash my dishes. Praying I can do myself."

Selma, Abie and their four children ran a dry goods store on the Lower East Side. Over forty years, they expanded and made a fortune so they decided to buy a department store – Macy's. They toured the huge store with Mr. Macy himself. Afterward, Abie wrote a check for the ten million down payment, when Selma tugged at his sleeve.

"You didn't notice? There's no apartment in the back!"

Rivka tottered into a lawyer's office and told him she wanted a divorce.

"A divorce?" asked the shocked lawyer. "Tell me, how old are you?"

"Ninety! And how old is your husband?"

"And how long have you been married?" he asked in disbelief.

"Why would you want a divorce now?"

Myrna and David dated five years, yet not once did David bring up the subject of marriage. Finally, Myrna's mama sat her down.

"Darling, I think you've waited long enough. The next time you're out, give him a little hint, OK, Mamala?"

The next Sunday, David took Myrna to their favorite Kosher Chinese Restaurant. As he read the menu, he casually asked her, "So Myrna, how do you want your rice? White or fried?"

Without hesitating, Myrna looked up at him, and replied, "Thrown."

A rabbi was talking to precocious six-year-old Mendel.

"So, you tell me that your mother says your prayers for you each night. That's very commendable. What does she actually say?"

A new flood was predicted and nothing could prevent it. In three days, the waters would wipe out the world.

The Dalai Lama appeared on worldwide media and pleaded with humanity to follow Buddhist teachings to find nirvana in the wake of the disaster.

The pope issued a similar message, saying, "It is still not too late to accept Jesus as your Savior."

The chief rabbi of Jerusalem took a slightly different approach: "My people," he said, "we have three days to learn how to live under water."

You can buy Marnie's book by clicking here.

A Chanukah Call to Action
The Promise Of The Land
Which Chat Are You On?: Parshas Behar/Lag Ba’Omer
Do You Like Slow-Cooked Food? Thank the Jews
Comments