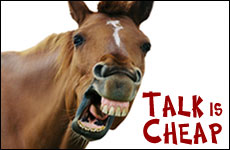 Every time I open my mouth I am making a choice: Will I use my power of speech to heal, or will I use my words to hurt?

While talking with a friend of mine, she revealed that her husband was unhappy with his current job. Apparently, the human resources department in his firm had informed him that while he was free to continue working in his department, he could be sure that he would not be promoted. This attitude was unusual for the large corporation he worked for, and I questioned her about this unexpected turn of events.

She sighed. Apparently, a fellow employee had reported her husband to HR after seeing him commit the "crime" of using spring water from the water machine to wash his hands before bread. This, combined with some conflicts her husband had experienced with a fellow worker had sufficiently black-listed him, precluding any hopes of promotion.

How many of us have had our futures affected by people who did not think before they spoke?

My first reaction was outrage. To stunt a bright and productive employee's career because of such flimsy accusations was clearly a crime! But my second thought was one of deep astonishment. I could not help but ponder the ramifications of the co-worker who snitched on my friend's husband to the HR department. Could he or she have imagined that a simple piece of gossip would result in a major career setback? Did he or she even stop to weigh the consequences of the words that would be spoken? And how many more of us have had our futures affected by people who did not think before they spoke? The first chords of deep realization struck at me: words are weighty.

It was with this new outlook that I greeted the technician who had just finished cleaning our carpets, a week later. A thorough examination of the carpet and of his technique left me feeling unsatisfied with the thoroughness of the service. Furthermore, the demeanor and behavior of the technician seemed inappropriate to me. The reputable company I had hired offers a ten-day warrantee on their work, during which time they will come back, free of charge, to correct any problems or dissatisfaction.

My first instinct, of course, was to call to complain. After all, I am Mrs. Caveat Emptor -- I frequently call companies with my legitimate complaints about their defective products, and receive first-class coupons for free boxes of cereal, sippy cups, raisins -- you name it. So I was all set to give Carpet Cleeners a piece of my mind, when an unsettling thought shoved me off my high horse.

There was a person involved here. It was a man, with a family to support, who had just finished cleaning my carpets. If I called the company with a complaint, they would naturally check to see which technician they had sent to me. They would surely note on his record that he had failed to place plastic tabs under my furniture, etc. How would that affect his job security? Once they left my mouth, my words could never be taken back.

I put the phone down and didn't make the call. My carpets were clean, and the side things that had irritated me didn't seem important enough to put someone's reputation and career on the line.

Our Sages teach us that it is mankind's ability to speak that sets us apart from the animal kingdom. Speech is a ly human characteristic, endowed upon us from the Almighty. Certainly not something to squander, speech and communication enable us to serve God in numerous ways, and they are vital in our human relationships as well. We are told that every word a person says is recorded and will be played back after the person departs this world, when God examines his or her life. "The walls of the house," states the Talmud, "will testify as to the words spoken by its inhabitants." Pretty heavy connotations for something popularly referred to as "free speech."

And the power of words runs very deep. Words can build or destroy entire worlds.

The story is told of a king who had a rare and almost incurable illness. In fact, the only remedy for his disease was for him to drink a cup of lioness milk. This was obviously a tall order, and even his bravest stewards trembled at the thought of filling this particular prescription. One courageous man stepped forward to save the king's life, and by virtue of his cleverness, he succeeded in obtaining milk from a lioness. That night, after he had gone to sleep, the valuable potion safely stored away until the morning, the limbs in the brave knight's body began to argue. Each part of the body wanted to step forward to claim the credit for accomplishing such an incredible feat. In quick succession, the brain, feet, hands, eyes, and ears all bragged about their superiority in the mission, until the mouth stepped forward.

"I maintain that I, alone, am solely responsible for the success of this mission. I have the power to bring us all tremendous reward from the king, or, if I wish to, I can also have us all killed."

The other body parts pooh-poohed the mouth's arrogant words, but the next morning they sorrowfully realized how right the mouth was. When it came time to present the king with the lioness' milk, the "mouth" proclaimed it to be dog's milk. The king was enraged, and sentenced the stunned knight to immediate death. After proving its point, however, the mouth quickly turned around and saved the situation by pleading temporary insanity and insisting that the milk was, indeed, from a lioness. The king drank the milk and was cured, and the lesson, however allegorical, is clear. Words can nurture, and words can kill.

The mouth is an incredibly potent instrument. It can be a salve or a gun. It can encourage or it can cut down.

In light of this, the mouth emerges as an incredibly potent instrument. It can be a salve or a gun. It can encourage or it can cut down. Words can bring families, nations, and continents together, or conversely, words can shatter relationships and cause ultimate destruction. The full import of the power of speech necessitates careful training and use.

But being that the mind-mouth connection is so rapid, "Think before you speak" can be difficult. God, however, has given us every indication that He expects us to be up to the task. Our Sages note that the mouth is the only orifice in the body that contains two coverings: both teeth and lips were given to contain such a powerful tool. Furthermore, an entire body of Jewish law is devoted to the rules of forbidden and permitted speech. Because clearly the power of words goes way beyond idle chatter, gossiping around the water-cooler, and shmoozing.

My decision to refrain from complaining about my carpet-cleaning technician was really just the first necessary step in turning my mouth in the right direction. All day long, I use my speech to negotiate, direct, praise, commiserate, problem-solve, and communicate. Each time I open my mouth, though, I am making a choice. Will I use my power of speech to heal, or will I use my words to hurt? Even softening my tone of voice one notch can make a difference to the child I am speaking to. Leaving out one small detail in a conversation can cast a much more favorable light on the subject in question.

Right now, short of muzzling myself until I whip my gift of speech into better shape, I must do the best I can with what I've been given. The cell phone ads scream, "Talk is cheap!" proclaiming their unbeatable service plans. Ultimately, I'd like to work toward a mental image of a much flashier banner than any cell phone ad that will pop up in my mind as I speak, emblazoned with a different slogan: "Talk is not cheap -- it can cost billions in collateral damage."

Thank God It’s Us and Not Some Other Family

Why 13 Is the Age for a Bar Mitzvah

Ethics of the Fathers, 3:9 Direct Line to the Heavens

The Diet for the Soul: Ethics of the Fathers, 4:2
What Makes Eli Run?
The Tyranny of Materialism
Science Enters the Mysterious Inner World of Consciousness
Comments
MOST POPULAR IN Spirituality
Our privacy policy