Anti-Zionism Is the New Anti-Semitism 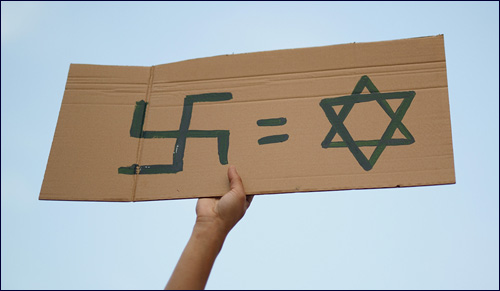 The blood libel of our time.

On March 27, speaking to the Sunday Times, former Archbishop of Canterbury Rowan Williams expressed his concern at rising levels of anti-Semitism on British university campuses. There are, he said, “worrying echoes” of Germany in the 1930s. Two days later, in The Times, Chris Bryant, the Shadow Leader of the House of Commons and a senior member of the British Labour party, warned that the political left was increasingly questioning the right of the state of Israel to exist, a view he called a “not too subtle form of anti-Semitism.”

Across Europe, Jews are leaving. A survey in 2013 by the European Union Agency for Fundamental Rights showed that almost a third of Europe’s Jews have considered emigrating because of anti-Semitism, with numbers as high as 46 percent in France and 48 percent in Hungary.

Nor is this a problem in Europe alone. A 2015 survey of North American Jewish college students by Brandeis University found that three-quarters of respondents had been exposed to anti-Semitic rhetoric. One third had reported incidents of harassment because they were Jewish. Much of the intimidation on campus is stirred by “Israel Apartheid” weeks and the BDS (Boycott, Divestment and Sanctions) campaign against Israel. These have become what Easter was in the Middle Ages, a time for attacks against Jews.

Something is clearly happening, but what? Many on the left argue that they are being wrongly accused. They are not against Jews, they say, only opposed to the policies of the state of Israel. Here one must state the obvious. Criticism of the Israeli government is not anti-Semitic. Nor is the BDS movement inherently anti-Semitic. Many of its supporters have a genuine concern for human rights. It is, though, a front for the new anti-Semitism, an unholy alliance of radical Islamism and the political left.

The legitimization has also changed. Throughout history, when people have sought to justify anti-Semitism, they have done so by recourse to the highest source of authority available within the culture. In the Middle Ages, it was religion. In post-Enlightenment Europe it was science. Today it is human rights. It is why Israel – the only fully functioning democracy in the Middle East with a free press and independent judiciary – is regularly accused of the five crimes against human rights: racism, apartheid, crimes against humanity, ethnic cleansing and attempted genocide. This is the blood libel of our time.

Anti-Semitism is a classic example of what anthropologist René Girard sees as the primal form of human violence: scapegoating. When bad things happen to a group, its members can ask two different questions: “What did we do wrong?” or “Who did this to us?” The entire fate of the group will depend on which it chooses.

If it asks, “What did we do wrong?” it has begun the self-criticism essential to a free society. If it asks, “Who did this to us?” it has defined itself as a victim. It will then seek a scapegoat to blame for all its problems. Classically this has been the Jews.

Today the argument goes like this. After the Holocaust, every right-thinking human being must be opposed to Nazism. Palestinians are the new Jews. The Jews are the new Nazis. Israel is the new crime against humanity. Therefore every right thinking person must be opposed to the state of Israel, and since every Jew is a Zionist, we must oppose the Jews. This argument is wholly wrong. It was Jews not Israelis who were murdered in terrorist attacks in Toulouse, Paris, Brussels and Copenhagen.

The hate that begins with Jews never ends with Jews.

Anti-Semitism is a form of cognitive failure. It reduces complex problems to simplicities. It divides the world into black and white, seeing all the fault on one side and all the victimhood on the other. It singles out one group among a hundred offenders for the blame. It silences dissent and never engages in self-criticism. The argument is always the same. We are innocent; they are guilty. It follows that if we – Christians, members of the Aryan race or Muslims – are to be free, they, the Jews, or the state of Israel must be destroyed. That is how the great crimes begin.

Jews have been hated because they were different. They were the most conspicuous non-Christian minority in pre-World War Christian Europe. Today they are the most conspicuous non-Muslim presence in an Islamic Middle East. Anti-Semitism has always been about the inability of a group to make space for difference. No group that adopts it will ever create a free society.

The hate that begins with Jews never ends with Jews. In a world awash with hate across religious divides, people of all faiths and none must stand together, not just to defeat anti-Semitism but to ensure the rights of religious minorities are defended everywhere.

History will judge us by how we deal with this challenge. We must not fail.

This article originally appeared on Newsweek.com

Taking a Stand against Iran
Scientific Curiosity and the Divine Encounter
Mind Over Milkshakes
Love the Convert
Comments
MOST POPULAR IN Current Issues
Our privacy policy
Aish.com Is Looking for Great Writers