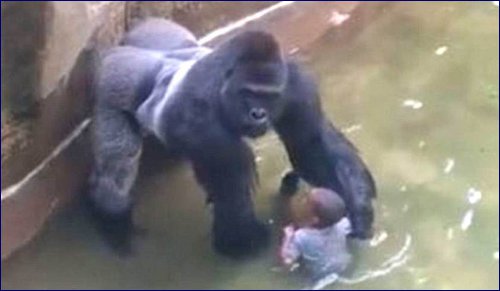 It was a choice between a human life and an animal life.

There’s no way to put it other than to call it a tragedy.

It would be wrong to say it was a story with a happy ending. True, a child’s life was saved – but at a terrible and profoundly sad price. And the aftermath of what happened this weekend at the Cincinnati zoo offers a fascinating insight into an ethical dilemma which is causing considerable controversy.

On Saturday afternoon a little four year old boy snuck away from his parents and somehow managed to fall into the enclosure for several gorillas. One of them, a 17-year-old gorilla named Harambe, picked up the child, at first seemingly protectively, but then in a manner which appeared increasingly dangerous and potentially life-threatening.

Harambe was a member of an endangered gorilla species. He had done nothing wrong. He deserved neither punishment nor death. Yet a human life was at stake and the zookeepers needed to make an immediate decision. A tranquilizing dart would have taken too long to take effect.

The Dangerous Animal Response Team concluded they had no alternative. They shot Harambe and saved the boy. And that opened the floodgates to an outpouring not only of grief but of anger, of blame, and of outrage.

More than 185,000 respondents on the zoo’s Facebook page as well as the change.org website condemned the parents for their lax supervision which allowed the little boy to crawl through the opening to the gorillas. But there was an even larger contingent of petitioners who expressed their fury at the zoo keepers for the action they took. They claimed, as the Washington Post headlined, “Shooting an endangered species is worse than murder.”

As the story spread, the blame game intensified. Guilt was assigned to the little boy, to his parents or to the zookeepers in varying measure. But what was most striking to my mind was the remarkable consensus of a great number of respondents that killing Harambe was an act of homicide – and in a stunningly ironic twist the parents of the little boy continue to receive numerous death threats for their part, albeit unintentional, in the gorilla’s death.

Watching a video of the event, there is room to question whether Harambe hovered over the little boy to protect him or to harm him. What is clear though is that he dragged the boy through the water by an ankle before grabbing the back of his clothing. Jack Hanna, one of the most renowned animal experts in the world and Director Emeritus of the Columbus Zoo and Aquarium, said he agreed “1000 percent with the decision to kill the animal. I have a home three miles from where the mountain gorillas live in Rwanda. Watch that gorilla’s response. He doesn’t know what is going on. And this is a silver back, not a female. He is alarmed. Yes, he goes to look at the little child. What happens when you tranquilize the animal? I’ve done research in the wild. I have seen what happens, I know what happens. When that dart hits the animal and you can imagine, it is like a shot, but he jumps. What if he had a hold of that little boy. I have seen a silver back gorilla take a green coconut and crush it – beyond the strength of anything you know. So it’s a choice between a human life and an animal life.”

That of course is the bottom line. A decision had to be made on the spur of the moment. Perhaps the best way to frame the question is to ask what would you have done if it were your child? It was a choice – between a human life and an animal life.

And what is most troubling is that for far too many people today the answer is not obvious nor even politically correct.

I share with animal rights groups their concern for protecting animals from cruel mistreatment, unnecessary pain, and heartless abuse. These are all Torah ideals. When Abraham’s servant Eliezer looked for a bride for Isaac he was most impressed by Rebecca’s efforts to ensure that the thirst of his camels was a priority as much as his own. When the rabbis wonder why Moses was chosen to be the leader of the Jewish people they point to a midrash which explains that as a shepherd Moses demonstrated his empathy for the suffering of others by carrying a hurt lamb on his shoulders to a stream of water to enable it to drink. “Because you care so much even for the needs of an endangered lamb,” God responded, “you are worthy of becoming the shepherd of the Jewish people.” The reason for shechitah – the biblically commanded way of killing an animal before it is made permissible for consumption is because it is the quickest and most painless method.

Judaism demands that we feed our animals before we feed ourselves – so as not to inflict emotional pain on them by forcing them to watch us eating without knowing during that time that their meal will shortly follow.

But animals are not human beings. Animals have life – but they were not created in the image of God. To equate man and beast is serious mistake not because it too greatly elevates the latter but because it too unreasonably diminishes the former.

“Murder” is a word which is inapplicable to the killing of an animal. The Bible teaches us that “He who sheds the blood of man, by man shall his blood be shed – because in the image of God He made man” (Genesis 9:6). The severity of the crime of murder is rooted in human godliness. It is not a false sense of superiority which accounts for the need to respect human life above that of all others. It is the most fundamental teaching of the Torah that human beings carry within them the spark of divinity which imbues them with both the blessings as well as the responsibilities of their uniqueness.

Animal lives deserve respect. Human lives demand reverence. When a choice needs to be made between them, the decision is clear and unequivocal. We may surely be saddened by Harambe’s death but we must be consoled by the recognition that it guaranteed the survival of a child created in the image of his Creator.

2020: A Year of Benefits and Better Habits

My MS Attitude
The 21st President of the United States: Failure or Inspiration?
Hiding Their Jewishness
The Jewish Pope: Following the Questions Home
Comments