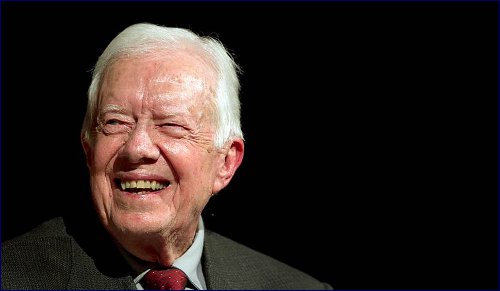 Don’t presume to know that his illness is a result of his anti-Semitic views.

Last week former President of the United States Jimmy Carter publicly revealed that he has been diagnosed with cancer of the brain. His condition almost certainly means that he faces death in the relatively near future. I feel it imperative to issue a warning to those already offering what they claim to be a theological judgment on his illness – a judgment which going back to the biblical book of Job has clearly been denounced as cruel and inappropriate.

You see, there are those already proclaiming with prophetic certainty that Jimmy Carter is being punished by God for his sins against Israel and the Jewish people. Carter’s cancer is the divine edict for his anti-Semitism. And with that smug analysis of heavenly justice these false prophets have unwittingly besmirched millions of righteous and God-fearing people who similarly find themselves suffering from incurable diseases and facing painful deaths.

Carter is not the only one dying from cancer. People in my own family were victims; pious and holy individuals I knew personally were targets of agonizing final ailments. But the Torah taught us not to dare make judgments based on equating someone’s suffering with sin and be guilty of the crime of the friends of Job.

The Talmud (Baba Metzia 58b), while expounding on the harm that can be inflicted with words, explains what the Bible means when it condemns the sin of “oppressing a stranger.” It offers this example:

“If someone is visited by suffering, afflicted with disease or has buried his children, one must not speak to him as his companions spoke to Job: ‘Think now, what innocent man ever perished?”’

The Talmud condemns the kind of friends who told Job he must’ve committed some crime in order to deserve his suffering. The rabbis consider their behavior in the category of those who oppress others with words. The friends of Job simply assumed sin – when God himself made clear to the reader at the beginning of the book that there can be other reasons for suffering which in no way reflect on the virtue of the afflicted individual.

True, the Talmud also teaches: “If a man sees that painful suffering visits him, let him examine his conduct.” (Brachot 5a). Our suffering may well be a consequence of our transgressions and we need to try to figure out what we did wrong and get back on track. We can understand the message since God chastises us “measure for measure.”

How can we reconcile these diametrically opposite statements?

The fact is there is really no contradiction here. In both instances the suffering may or may not be the consequence of one’s actions. But there is a major difference between using tragedy to find fault with others and having tragedy enlighten us with regard to our own failings.

The bottom line is that no individual can judge anyone else and deduce from the mere presence of suffering that this is God’s punishment for sin. It may or may not be true. It is in our personal lives that we are taught that for ourselves we should use painful events as spurs to self-reflection; our response to suffering needs to be introspection to discover if there might indeed be a divine message which calls us to repentance. But the story of the friends of Job speaks to us with a firm warning not to allow us the right to condemn others simply because of their distress. Someone else’s pain dare not be reason to justify moral disapproval.

Let me be perfectly clear. I have very strong negative feelings about Jimmy Carter. I agree with those who rank him among the three worst presidents in United States history, if not at the bottom of the list. I fault him for his many failures of leadership domestically. As a Jew, I find particularly offensive the way in which he made clear his bias towards the Palestinians – from whom he personally accepted many millions of dollars for his foundation – and his continued to this day obsessive hatred of Israel and its policies.

His comparison of the Israeli state to the apartheid of South Africa, going so far as to title his reflections on why the failure of the peace process can be blamed entirely on Israel “Palestine: Peace Not Apartheid”, makes clear how his prejudice overwhelmed his reason and perfectly illustrates why liberal Alan Dershowitz had no problem openly condemning Carter as an anti-Semite.

What proved particularly galling last week was that at the very press conference in which Carter announced the graveness of his illness he still found it appropriate to use this very moment to vilify Israel as the cause for the lack of peace in the Middle East. Slandering Jews it seems is uppermost in his mind even as he knows he will soon meet his Maker.

I hold no brief for Jimmy Carter. I will not be among those offering the soon to be expected laudatory eulogies. But that does not take away from my concern that we not confuse Carter’s cancer with the heavenly judgment that surely awaits him when he faces God’s final verdict.

To do otherwise would be to impugn the righteousness of all those doing battle with illness. What we need to affirm is the truth that, while it is beyond our ability to comprehend, even the pious know pain and even the saintly endure sickness.

Let us render final judgment on Jimmy Carter for his actions, not by way of his fatal illness.

Laughing While Someone Drowns

A Rabbi’s Rumination on Racism

The Land of Hope and Dreams
It Takes A Lot Of Faith To Be An Atheist
How Instagram Brought Back This Nostalgic Soup
What Makes Eli Run?
Comments
MOST POPULAR IN Current Issues
Our privacy policy