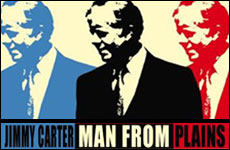 The film is as painful to watch as your last root canal, without the benefit of gaining something positive from the experience.

Watch out Gigli and Howard the Duck. You just might lose the contest for the worst movie ever made now that Jimmy Carter: Man from Plains has come to the big screen.

Produced by the same people who recently gave us the Al Gore documentary, An Inconvenient Truth, we're shown all the drama and excitement of a two-month book tour that is about as painful to watch as your last root canal without the incremental benefit of knowing that at least you gained something positive from the experience. An infomercial posing as entertainment and a distortion of facts masquerading as documentary, this film -- that would better have been called An Unconvincing Lie -- should probably be dismissed without comment were it not for the importance of its "hero" and the powerful impact it may yet have on a gullible public.

An infomercial posing as entertainment and a distortion of facts masquerading as documentary.

Most of us remember all too well why Jimmy Carter is so often ranked as the worst President in United States history. His mishandling of major crises led to his un-mourned exit from office, with the economy in shambles and his term viewed as an unmitigated disaster. Yet, with unprecedented chutzpah, Carter continues to violate the unwritten rule that former Presidents never criticize their successors as he openly vilifies our present day leaders and condemns our own country in his travels abroad.

Nowhere is his negativism more pronounced than in his ongoing crusade against Israel. Even Islamic Fundamentalists can do no wrong in his eyes when it comes to their hatred of Jews in the Holy Land. And so Carter has written his manifesto that in its four-word title manages to encapsulate two major lies to threaten Israel's existence: Palestine: Peace Not Apartheid. Can it really be that Carter still doesn't know that "Palestine" doesn't exist, that the name of the country is Israel, that a Palestinian State is still contingent upon Arab leaders at long last acknowledging the reality of a Jewish State in their midst? And is "Apartheid" really the right word to use to disparage the only democratic country in the Middle East, a country that offers residency and equal rights to its Arab citizens as no Arab country extends to its Jews?

It is hard to understand how someone with Carter's admitted intelligence can be so uncomprehending of the reality of a conflict that pits suicide bombers against innocent civilians, and then rails against Israel's defensive measure of a protective security fence. Does Carter really believe that Israel's treatment of the Palestinians "in many ways is worse than the treatment of blacks in South Africa [under apartheid]"?

There is only one way to explain not only Carter's obsession with Israel's supposed evil but also his distorted view of its policies. The Rabbis gave us a wonderful phrase to describe it, based on the biblical portrayal of the gentile prophet Balaam who came to curse the children of Israel: He was "blind in one eye". As brilliant as he was, he simply could not see when it came to the Jewish people. So, too, we have the remarkable enigma of an otherwise decent human being who has a blind spot with regard to the Jewish State.

What explains this anomaly? A personal friend of Carter's -- a man with extremely close ties to his Administration -- shared his opinion with me years ago on condition that his name never be mentioned as source. I offer it as strong possibility. Carter has always been profoundly affected by the Bible. He taught Sunday school for years. He and his wife read Biblical texts to each other before they go to bed. His favorite verses come from the New Testament. In his heart of hearts, Carter still cannot forgive the Jews for a crime much of Christendom today no longer condemns -- the crime of deicide -- and so he finds other reasons to continue to hold them liable for sins against humanity.

Jimmy Carter: Man from Plains follows the former President as he tours the nation pushing his book and peddling its prejudices. But perhaps, you say, he is right? And shouldn't a documentary allow you to hear every side? Strange then that when we're shown Professor Alan Dershowitz demanding that Carter debate him on the issues, Carter adamantly refuses -- and makes that a condition of his appearance at Brandeis University.

When it first appears that Brandeis is prepared to cancel his talk, Carter's shock is apparent. He finds it impossible to believe that others have a right to question him. The movie repeatedly shows us Carter getting the last word, stubbornly refusing to ever admit error or even a scintilla of self-doubt. Here is a man who in his heart really believes he has never been wrong, even when pointedly asked about his performance in the Iranian hostage crisis.

Students of media slanting can use this film as a primer.

Viewers should certainly be told that members of Carter's own staff have resigned to protest misstatements of fact in his book. Yet, images of Jews shown protesting the unbalanced and hateful positions of Palestine: Peace Not Apartheid are selected to convey irrational and irate fanatics; Arabs asking for signatures are invariably polite and pleasant. Students of media slanting can use this film as a primer on how careful editing can be used to sway audience opinion and how facts can be ignored in favor of cinematically programmed feelings.

This Hollywood homage to Carter begins fittingly enough with words of praise from his mother Lillian and never moves from this kind of uncritical veneration. One can only wonder if director Jonathan Demme confuses Carter's initials, J.C., with those of another idolized figure. We are meant to acknowledge a grandfatherly, kind, gentle, sincere, saintly and hard-working hero committed to making the world better, beloved and honest to a fault. Watch him as he actually mingles with common folks. See him shake hands with plain people as he flies coach. Catch him eating at a barbeque with simple neighbors. Then grasp the subliminal message of the title Man from Plains. It's as if the word "Man" for someone like him is modest acceptance of a description actually beneath him. Small wonder that several reviewers found themselves squirming in their seats as they watched what one of them called the movie's attempt to turn Carter into the Dalai Lama.

Can a film this bad really cause harm? Will it help give further publicity to a book that soon gives away that its prejudices preclude rational analysis? Perhaps those who already share our former President's obsession with Israel's "evil behavior" will be fascinated by this over two hour excursion into banality. Most others, I'm certain, will be fast asleep long before the picture has ended.

The Jewish Jordan
For Every Individual, A Torah Scroll
Allegiance To The Monarch
Meet the Real You: Yom Kippur
Comments
MOST POPULAR IN Current Issues
Our privacy policy
Aish.com Is Looking for Great Writers