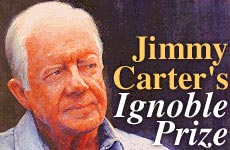 As a patriot and a man of honor, Jimmy Carter should refuse the Nobel Peace Prize. Such an act of integrity would win him more respect and admiration from his countrymen than anything he has done since he left the White House in 1981.

The Nobel Peace Prize committee has sometimes shown disturbingly bad judgment -- above all in 1994, when it bestowed the prize on an unrepentant Yasser Arafat -- but never before has it awarded the peace prize with the explicit purpose of castigating the United States. That new low was achieved last week, when Nobel Committee Chairman Gunnar Berge emphasized that the award was meant as a denunciation of American policy toward Iraq.

"It should be interpreted as a criticism of the line that the current administration has taken," Berge said. "It's a kick in the leg to all that follow the same line as the United States."

Gunnar Staalsett, another committee member, confirmed that the award was intended as a condemnation of US policy. But surely that was obvious to anyone who read the citation: "In a situation currently marked by threats of the use of power," it said, "Carter has stood by the principle that conflicts must as far as possible be resolved through mediation and international cooperation." Remarked the Nobel Committee secretary: "There can't be much doubt about the intention of that."

No, there can't: A smug little group of Norwegian politicians chose Carter for the Nobel Peace Prize in order to take a slap at a superpower willing to go to war, if necessary, to depose a vicious tyrant. Carter should be livid at this attempt to use him to discredit his country and embarrass President Bush. To show that he cares more for the honor of the United States than for personal glory, he ought to turn the prize down.

But he won't. There are many things of which Carter disapproves, but slaps at the United States and digs at other presidents are not among them. On the contrary, they are something of a Carter specialty.

Consider, for example, his first meeting with Arafat in 1990, an event described by historian Douglas Brinkley in his admiring biography of Carter, The Unfinished Presidency.

"There was no world leader Jimmy Carter was more eager to know," Brinkley wrote. Carter "felt certain affinities with the Palestinian" and seemed to want badly for that affinity to be reciprocated. When Arafat complained about the "betrayals" of the Reagan administration, Rosalyn Carter (who was taking notes on the meeting), exclaimed, "You don't have to convince us!" This, Brinkley reported, "elicited gales of laughter all around." Carter sympathetically "agreed that the Reagan administration was not renowned as promise keepers."

It is safe to say that Ronald Reagan would never have attempted to curry favor with an odious terrorist by mocking and deriding his successor. Or, for that matter, his predecessor.

Bad enough that Carter would run down another president in a private conversation with the head of the PLO. Worse was his behavior last May, when he went to Cuba and openly implied that the US government was lying.

A few days before Carter's trip, Undersecretary of State John Bolton had warned of Cuban involvement in developing biological weapons. "The United States believes that Cuba has at least a limited offensive biological warfare research and development effort," he said, and "has provided dual-use biotechnology to other rogue states."

But during a visit to a Cuban biotech facility, Carter claimed that US briefers had repeatedly assured him that there was no evidence of Cuba's doing any such thing. Secretary of State Colin Powell reiterated Bolton's warning and said that Carter was mistaken, but the damage had been done: To lend support to Castro's dictatorship, Carter had purposely undermined US policy and labeled the administration dishonest.

Yet even that isn't the worst instance of Carter's willingness to undercut his successors.

During the runup to the Gulf War in 1990, in what even Brinkley calls "the low moment" of his post-presidency, Carter actively tried to sabotage President George H.W. Bush's efforts to win UN Security Council approval for armed action to liberate Kuwait. Without notifying Bush, Carter wrote to the heads of state of each member of the Security Council, urging them to vote against the US-drafted resolution.

"In his letter," Brinkley discovered, "Carter urged these influential world leaders to abandon US leadership and instead give 'unequivocal support to an Arab League effort' " to link the Iraqi conquest of Kuwait with the Israel-Palestinian conflict. Lobbying foreign governments to subvert the diplomatic efforts of a sitting president is something ex-presidents simply do not do. But Carter not only did it, he (later) even boasted of it.

Lately, the former president has been harshly denouncing the current president's policy toward Iraq. America is in no danger from Baghdad, he declares, and war talk from the administration's "belligerent and divisive voices" must be resisted. Naturally he has no intention of muffling his own belligerent and divisive voice. But then, why would he? It has just won him a Nobel Prize -- which he fully intends to keep.

Seeing Truth in a Complex World

A Refugee’s Secret Act of Kindness
Don’t Believe in Other Gods Versus God is One
Seeing Without Eyes
Why Shouldn’t We Eat Whatever We Want?
Comments
MOST POPULAR IN Current Issues
Our privacy policy
Aish.com Is Looking for Great Writers