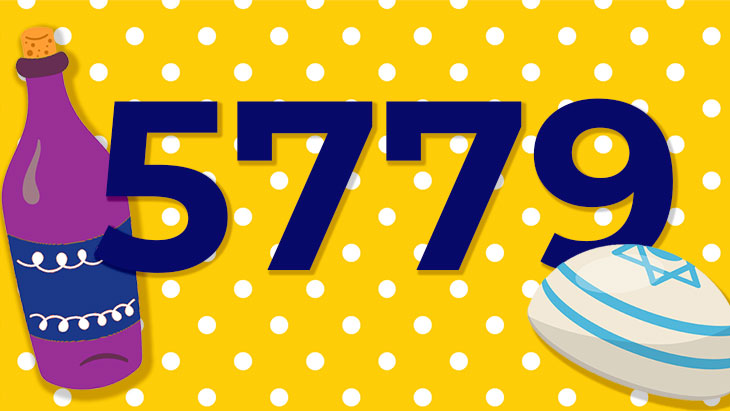 The top Jewish news stories from around the world in 5779.

Rosh Hashanah, the Jewish New Year, is known as the Day of Judgment. We’re to be judged for the coming year. Thus, it’s our duty to recount the last year, for good and bad, so that we can make the same mistakes.

Here are some highlights of what happened in the Jewish world last year.

Let us begin with Israel, the center of Jewish life.

We Voted in Israel Again

In Israel, we do things until we get them right.

From the municipal elections to the bi-monthly federal elections, voting has turned into an activity that Israeli society has adopted once every two months. Nobody is bothered by this, as Sundays don’t exist yet in the Middle East. The citizens are happy to vote every week, as they realize this is the only way to get a day off work. If we have to collect bumper stickers to get a day of vacation, we will.

To gain more votes, the religious party of Shas stated, “It’s a commandment to vote.” This is the first new mitzvah issued since Moses received the Torah from God on Mount Sinai. What makes this new commandment beautiful is that judging by the huge voter turnout, it seems that more secular people are serving God than ever before.

For those who were worried about Israel’s popularity, many pop singers still won’t perform in Israel. Also, Airbnb removed listings from Israeli settlements. Little did they know that there was only one listing from a settler to begin with. And that one person threatened to sue Airbnb which promptly reversed their decision. At least BDSers are principled.

Now tourists and citizens of Israel don’t have to deal with van shuttles to and from the airport (called a sheeroot). As a result, the amount of beeping, cars getting cutoff and puking on Israeli highways has been cut in half.

Terror Tunnels from Gaza are Destroyed

Israel is blamed by the media for oppression against tunnels and destroying the environment.

Aid from Israel has helped people around the world and there’s still no shade in the Arava Desert. Likewise, the tree I purchased in kindergarten has yet to be found.

In a great act of kindness to the world, Israeli rescue teams have flown in to aid a host of countries around the world during recent natural disasters, including hurricane Dorian in the Bahamas. My suggestion is that the Israeli teams stop showing up so don’t get blamed for the hurricanes.

The company that made square Matzah and cough syrup wine famous was sold. That news was a huge letdown. People thought they were finally cutting prices. Alas the new owners are still charging eight dollars a bottle.

Around the globe, Jews getting beaten up is on the rise. It has turned into a tradition practiced more often than Israeli elections.

Don’t worry. This doesn’t seem to concern most people. They seem to be more preoccupied with the idea that we control the media; a media that everyone hates.

This still doesn’t answer the question of why they are not doing anything helpful during the week, when Shabbat is over.

Many people claim Donald Trump is wearing a toupee. Little do they know, he’s Orthodox and he is using that in place of his Yarmulke. That joke probably didn’t help quell the conspiracy theories.

Just in case anybody was worried that anti-Semitism in Eastern Europe is at an all-time low, that has been dealt with. We felt like the conspiracy theories were getting a little stale. The anti-Semites think we control American politics? That’s old news. Please welcome us to Ukrainian politics.

I have no idea what his beliefs are, but it’s really cool seeing an ex-NBA star wearing tzitzis. Even if he is sitting on the bench, he is tall and has a huge yarmulke along with his tzitzis. That’s more exciting than watching Hapoel Jerusalem play basketball. Amare, welcome to Israel. No pressure but Israel needs an Olympic win in 2020.

He’s famous, we might as well call him Jewish too. I hope it was hand crocheted. I would never pay that much for a machine-made Yarmulke.

Netflix Has Decided to Run Every Israeli Series

Fouda, The Spy, and the most violent one of them all, Shtisel, are all featured on Netfilx. Many Israelis are angry that they haven’t picked up Rechov Sumsum and Shalom Sesame yet, as most three-year-olds already know how to surf the internet.

Fiddler on the Roof in Yiddish is a Smash

Winning the 2019 award for Best Musical Revival, finally, they got Fiddler on the Roof right. After years of performing Fiddler in English, they realized people like watching theater in a language they don't understand.

I am just guessing. I am not sure, but it’s a pretty solid gamble. A Jew definitely got a Nobel. I hope that doesn't cause more anti-Semitism.

Orlando hotel didn't have enough food, in what was known as the greatest crisis since the Jews left Egypt. Unlike Moses though, the manager of the Pesach program abandoned the Jewish people once they started complaining. One lady, who found a slice of minute steak, threw her food on the floor, claiming that when the Jews left Egypt "they didn't have bread, but they head some decent brisket." Then she exclaimed, "You call this a roast?!"

They took the fidget toy and turned it into a dreidel. Taking the Chanukah spin top game to the next level, now you spin the Dreidel on the table and it doesn’t stop. In this new holiday game where there is no loser, you can extend Chanukah to nine days with one spin.

I am now looking forward to a coming year with less anti-Semitism and more elections. I really need more days off.

The Matzohrella Fella
The 21st President of the United States: Failure or Inspiration?
Hiding Their Jewishness
The Jewish Pope: Following the Questions Home
Comments