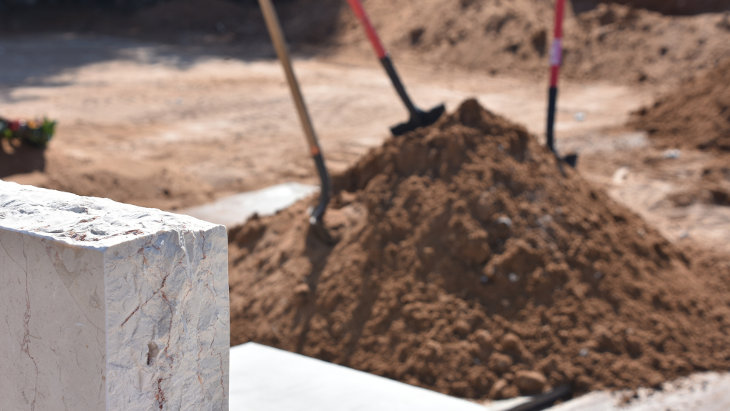 Some explanations for the laws and customs of Jewish burial.

My job as the president of the Jewish burial society is a sacred privilege and the highest form of kindness.

In Hebrew, the Jewish burial society is called the “chevra kadisha” which literally means “the sacred society.” While my work is certainly sobering and humbling, I don’t see it as morbid or depressing. Members of the chevra kadisha feel honored to be given this unique responsibility and privileged to perform this ultimate act of kindness for the deceased.

Here are some explanations for the laws and customs of Jewish burial:

1. There is a specific commandment in the Torah to bury the deceased.

2. Burying the body in the earth helps the soul find eternal rest.

As Jews, we respect the earth’s ecological process of breaking down and returning all non-living matter back to the earth. We recognize that this natural law was set in place by an all-kind and loving God.

More importantly, burying the body underground helps the soul find total peace. The Talmud and Midrash (Bereishit Rabbah 100:7) tells us that the soul only finds complete peace once the body is buried underground and returned to the earth.

3. Burial prepares the body for its ultimate reunion with the soul.

Death is not the final destination; it’s just one major step in the journey. The Midrash (Bereishit Rabbah 28:3) says that a spark of the soul still remains in the body even after one dies, giving the body an element of eternity.

The heavenly spark that remains in the body is likened in the Talmud (Sanhedrin 90b) to a seed that will ultimately germinate and sprout in the future, during resurrection of the dead. In this way, preserving the body underground sets the body up for ultimate rebirth.

This is why we pay respect at a loved one’s grave. By praying by their burial site, we arouse that heavenly spark within them and cause them to intercede on our behalf.

4. Burial helps prepare the soul for its encounter with God.

Members of the chevra kadisha purify the body through a process called “taharah”, or purification, to help the deceased leave the world in a pure and pristine state. The body is immersed in a mikvah or poured water over the body and is dressed in white shrouds, which symbolize purity. Kabbalistic sources say that burying the body while in a state of purity is beneficial for the soul.

Aware of the significance of their task, members of the chevra kadisha are filled with a sense of solemnity and purpose as they perform the taharah. As we purify the body, we say prayers and psalms for the deceased, asking God to judge the departed with mercy and

5. Jewish burial ensures that the body is treated with dignity and respect.

Like the mantle of a Torah scroll no longer fit for use but buried with respect, a body that partnered with a soul to accomplish its mission in the world deserves respect.

For this reason, according to Jewish law the body is not unnecessarily exposed. It is gently moved and only when necessary. Men prepare men for burial and women care for women. According to Jewish custom, members of the chevra kadisha watch over the body (in Hebrew, called shmira) from the moment of death until burial so that it shouldn’t appear to be disrespected or discarded.

6. Jewish burial is sensitive to the soul’s discomfort.

According to the Midrash (Bereishit Rabbah 100:7; see also Talmud Shabbat 152b), the soul hovers over the body immediately following death. While it’s helpless to do anything, the soul observes everything that’s happening to its body below.

Jewish law recognizes this and therefore requires those who care for the body to maintain a solemn mood and avoid trivial conversations while preparing the body for burial. When the taharah process is finished, members of the chevra kadisha ask forgiveness from the deceased, just in case we didn’t give them the respect they deserve.

In the past, Jews went to great lengths – and at times even risked their own lives – to bury other Jews according to the Jewish tradition. Performing this final act of kindness for people we don’t even know reminds us that we’re all connected, and that all Jews, regardless of religious observance, deserve the dignity of a proper Jewish burial.

Click here to read an article on the Jewish perspective of cremation.

Rabbi Chananaya Kramer is a resident of the Jewish Burial Society of South Jersey, an affiliate of the National Association of Chevra Kadisha under the leadership of Rabbi Zohn. He uses his decade-long experience to oversee the training of other chevra kadisha members and is passionate about giving every Jew the dignity of a halachic Jewish burial. To get in touch with Rabbi Kramer or learn more about Jewish burial, visit https://www.choosejewishburial.org/chevra-of-south-jersey/.

Taharah: A Personal Look at the Jewish Way of Death and Burial
Scientific Curiosity and the Divine Encounter
Mind Over Milkshakes
Love the Convert
Comments
MOST POPULAR IN Lifecycle
Our privacy policy
Aish.com Is Looking for Great Writers