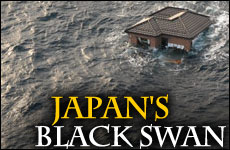 What could go wrong? The significance of unexpected events in history.

A black swan isn't just a ballet role played to perfection by Natalie Portman that won her an Oscar for best actress.

As developed by Nassim Nicholas Taleb in his masterful scholarly work The Black Swan, praised by many as one of the most important books of the century, the black swan is a metaphor about the significance of unexpected events in history. As he explains it, it is an event with three attributes. First, it lies outside the realm of regular expectations, because nothing in the past can convincingly point to its possibility. Second, it carries an extreme impact. Third, in spite of its outlier status, human nature makes us concoct explanations for its occurrence after the fact, making it explainable and predictable.

Simply put, black swans are things we were certain could never happen.

And recent tragedies that have captured world headlines have been perfect illustrations of experiences that were supposedly out of the range of possibility.

Japan is today struggling to cope with its largest disaster since the nuclear devastation of Hiroshima and Nagasaki. Years ago, architects and engineers joined to create quake-proof buildings and planned backup generators and thick containment vessels at nuclear plants. Nothing could ever go wrong they assured their countrymen. Their mantra was that humankind had triumphed over risk. Technology had finally achieved mastery over the vicissitudes of nature.

Recent events make clear how wrong they were. They had foreseen the possibility of an earthquake, but not one of a magnitude of 9.0. They built a sea wall to protect against an expected tsunami, but not one that rolled six miles inland, devastating towns, obliterating villages, and causing partial meltdowns at three major nuclear reactors.

The tragedy in Japan revealed the fragility of our knowledge of the world and its workings.

This disaster was not a failure of human engineering, but of human imagination. No one dreamt it could happen; that made everyone certain that it was impossible.

The tragedy in Japan revealed the fragility of our knowledge of the world and its workings. The wisest fell back on the lame excuse, “But no one could have expected this…” Black swans happen. We choose to disregard them due to hubris, human arrogance that prevents us from acknowledging that with all of our knowledge we are still not divine masters of the universe. Surely, we all thought, the engineers and the scientists and the weather forecasters and the technicians and the nuclear specialists were intelligent enough to make proper plans to stave off catastrophe. But they weren't. And human mastery of events was not as total as we presumed. The experts were wrong.

Hurricane Katrina also couldn't happen. We built walls around New Orleans to contain raging waters. We felt secure because we arrogantly told ourselves we were so smart the forces of nature no longer threatened us. And we were similarly mistaken.

The financial collapse of 2008 and 2009 couldn't happen. Our Wall Street wizards were too brilliant to allow for a financial meltdown. The people who annually received multimillion dollar bonuses couldn't have created prime loan strategies that would prove worthless. The real estate market couldn't collapse forcing an untold number of foreclosures when "those in the know" assured investors there was absolutely no risk involved. And yet they too were all wrong.

The oil industry finally figured out how to pump liquid gold from beneath the ocean without any fear of spillage or contamination - or so they assured us. Until the BP catastrophe last summer proved them wrong. Again, it couldn't happen because that's what the experts told us - until it did, with all of the horrible consequences. The collective wisdom of the marketplace and the scientists proved wanting. It was yet another Black Swan.

Black swans remind us that in spite of all of our achievements, we are still ultimately mortals.

The unexpected overwhelms us because our egotism doesn't allow for considering the possibility of human error.

The ancient Greeks understood overweening pride as the underlying cause of man's downfall. Human hubris, they said, "is the pride that comes before the fall". The greatest antidote to man's exaggerated sense of self-importance was, for the longest time, a religious sensitivity that acknowledges a Higher Power. Recognition of God could at least place a limit on man's ego. But a contemporary world that could make Christopher Hitchens's book, God Is Not Great: How Religion Poisons Everything an international bestseller is a world that suffers from the delusion that we are all self-made heroes who have no need to worship anything but ourselves. As Dorothee Sölle put it so beautifully in The Silent Cry: Mysticism and Resistance, “With the disappearance of God, the Ego becomes the sole divinity.”

That is why we continue to be stunned by black swans. They starkly remind us that in spite of all of our achievements, we are still ultimately mortals. And if the many tragedies we have endured in the past decade can teach us that lesson, perhaps we may, in spite of their horrific consequences, salvage a measure of blessing from them.

Murmurs in the Dark
Scientific Curiosity and the Divine Encounter
Mind Over Milkshakes
Love the Convert
Comments
MOST POPULAR IN Current Issues
Our privacy policy
Aish.com Is Looking for Great Writers