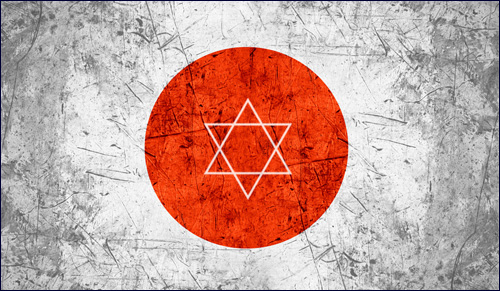 Seven fascinating facts about Jewish links with the Land of the Rising Sun.

Some of Japan’s biggest influences have come from contacts with Jews, and Japan in turn has influenced Jewish culture and history. Here are seven fascinating facts about Jewish links with the Land of the Rising Sun.

Some of the first foreigners to sail to Japan during the Age of Exploration in the 16th and 17th centuries are thought to have been Jewish merchants and explorers in the employ of Dutch and British navies. Seeking to insulate the nation from foreign ways, in 1639 Japan closed its doors to the West, forbidding foreigners from entering the country for over 200 years. 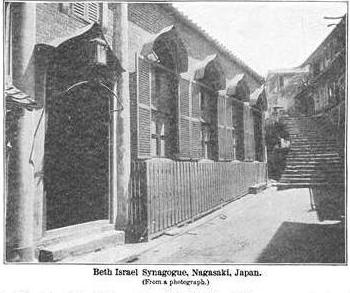 This edict was lifted in 1853 and some of the first foreigners to settle in Japan were Jewish. By the 1860s, a Jewish community lived in Yokahama, near Tokyo, and established Japan’s first synagogue there. By 1895, 50 Jewish families called Yokahama home. Though small, the community was diverse; tombstones in the town’s Jewish cemetery are inscribed in Hebrew, German, French, Russian, German and Japanese. Soon, Jewish communities sprung up in Nagasaki, Kobe and Tokyo. Jews fleeing from pogroms in Russia made up many of these early settlers.

The Russo-Japanese War of 1904-5 pitted the navies of the Russian and Japanese Empires, as Japan sought to check Russia’s eastward territorial ambitions. Over 70,000 Russian soldiers were taken prisoner in Japan, including nearly 2,000 Jewish soldiers. 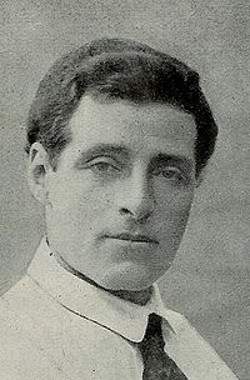 One of these POWs was a Jewish war hero named Joseph Trumpeldor, who’d lost an arm in the war. Trumpeldor was raised in an assimilated family, but in his POW camp he met Jews from Poland, Lithuania, Bessarabia, Volhynia Podolia, Siberia, and other areas in Russia’s empire, and began to feel outraged at his fellow Jews’ experiences of anti-Semitism back home. Trumpeldor organized a Society of Jewish Prisoners of War, became its chairman, and in prison joined the cause to establish a Jewish homeland in Israel.

When he was released from his POW camp, Trumpeldor moved to Israel where he helped organize the Zion Mule Corp and build up the defenses of the nascent Jewish state. He fought in World War I, was wounded in the Battle of Gallipoli, and after the war formed a pioneering youth movement in Russia to prepare young Jews to move to Israel. Trumpeldor was murdered by Arab terrorists who attacked the Jewish town of Tel Hai, in Israel’s north, in 1920.

Chiune Sugihara, Righteous Among the Nations

In the summer of 1940, Japan’s representative in Lithuania, Chiune Sugihara, was packing: Lithuania had just been annexed by the Soviet Union, and foreign diplomats were leaving. Just then, a messenger came in and informed Sugihara that a delegation of Jews wished to speak with him. 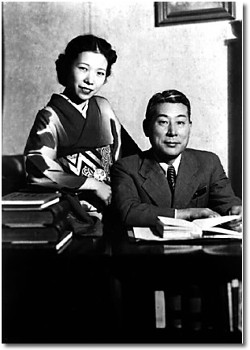 Stepping outside, Sugihara met Zerach Warhaftig, a Jewish refugee who would go on later to become a minister in the Israeli Government. Warhaftig had a request: thousands of Jewish refugees had poured into Lithuania and were desperate to leave. Almost all the nations of the world were closing their borders to Jewish refugees. Only one country allowed Jews to enter – Curacao, a Dutch colony in the Caribbean. But Jews lacked transit visas to cross the Soviet Union and sail to Curacao. Would Sugihara issue the visas?

Moved by the Jews’ plight, Sugihara immediately started issuing visas. Within days, Sugihara was ordered to stop by his supervisors back in Tokyo. Years later, Sugihara’s wife Yukio recalled that her husband had sleepless nights. He was so anguished about disobeying orders but the sight of terrified men, women and children who had walked from war-torn regions, compelled him to defy official orders.

From July 31 to August 28, 1940, Sugihara began to grant visas on his own initiative. He would spend 18 hours a day writing over 300 visas daily, more than one month's regular quota. These were lengthy, hand-written documents. He refused to take breaks to eat, knowing that every moment was a chance to save another life. At the end of each day, his wife recalled massaging his swollen hands.

Sugihara issued approximately 6,000 visas to Jewish refugees. He continued to issue visas until he was forced to leave his post on September 4 when his consulate was dissolved due to the impending Nazi invasion.

Upon returning to Japan in 1946, Sugihara was fired from the Japanese Foreign Service for the “crime” of issuing these visas. In 1984, Yad Vashem honored Chiune Sugihara as Righteous Among the Nations.

A Jewish Yeshiva in War-Torn Japan

Of all the great yeshivas in Europe, only one survived intact throughout the Holocaust, the famous Mir Yeshiva of Lithuania. Thanks to Chiune Sugihara, about 500 students, rabbis and their families left Lithuania for Kobe, Japan in 1940 and 1941. Once in Japan, the Mir refugees found their entry visas to Curacao were no longer valid, and settled in Kobe, reestablishing their yeshiva and holding classes. 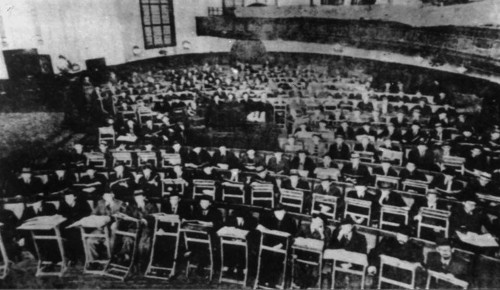 At first, the yeshiva’s Japanese neighbors were perplexed. Yeshiva students studied for 18 hours each day, and the sounds of the Jews’ loud singing and praying filled the neighborhood. Local officials were sent to find what was going on and came away impressed. The yeshiva received clearance to continue operating and its members were called “Holy Idealists” by the Japanese authorities. 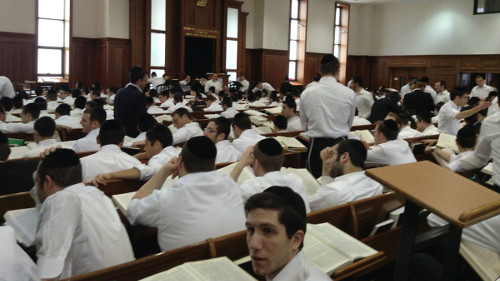 One of the Mir Yeshiva Beis Medrash’s today

In 1943, Japan relocated foreign refugees, including the members of the Mir Yeshiva, to Japanese-occupied Shanghai, restricting them to a ghetto within that city. Japanese authorities resisted pressure from their German allies to deport the Jews under their control, however, and the Mir Yeshiva continued to operate throughout the war. In 1946, the yeshiva was relocated to Jerusalem, where it continues to thrive, educating thousands of students each year.

Japan’s constitution provides some of the strongest women’s rights and protections anywhere in the world, mandating equality and freedom for all citizens. Less well known is that these ground-breaking provisions were written by a 22-year-old Jewish refugee, Beate Sirota Gordon. 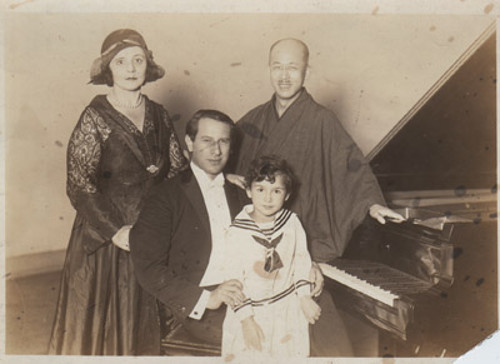 Beate with her parents and Kosaku Yamada in 1928

Born into a Jewish family in Vienna in 1923, Beate’s father Leo, a famed pianist, moved the family to Tokyo when Beate was five to take up a position at Japan’s prestigious Imperial Academy of Music. Beate went to school in Japan, becoming fluent in Japanese, Russian, English, German, French and Spanish. A brilliant student, Beate left for college in the US when she was just 15 years old, in 1939.

After the Japanese attack on Pearl Harbor, Beate lost contact with her parents. Hoping to learn more about their fate, she joined the American war effort. She got permission from her college to study for her exams without attending classes and took a job at a US government listening post in San Francisco, monitoring Japanese radio broadcasts and writing radio propaganda encouraging Japan to surrender. (Despite her work, Beate graduated with a degree in modern languages in 1943.) 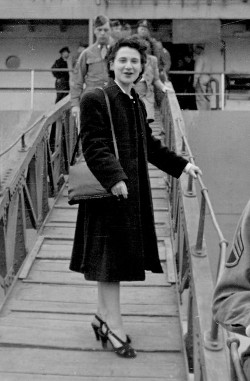 After the war, civilian travel to Japan was restricted, so Beate joined Gen. Douglas MacArthur’s staff as a civilian worker. She travelled with the general to Tokyo in 1946 and immediately went to her family’s home, which was a charred ruin. Beate eventually found her parents in an internment camp and nursed them back to health while working for MacArthur.

In February 1946, Beate was handed a top-secret assignment: help Gen. MacArthur draft a new constitution for post-war Japan. The only woman on MacArthur’s team, Beate was given the job of writing the Constitution’s articles on women and given seven days to complete the task. She was eager to help raise women’s status in Japan: “Japanese women were historically treated like chattel,” she later recalled, and here was her chance to change that.

Beate studied the constitutions of as many countries as she could, then drafted the following two articles in Japan’s constitution. Article 14, which asserts in part “there shall be no discrimination...because of race, creed, sex, social status or family origin” and Article 24, which guarantees women’s rights in “choice of spouse, property rights, inheritance, choice of domicile, divorce and other matters.”

Beate married a fellow Jewish staff member, Joseph Gordon, and devoted the rest of her life to introducing Asian arts and artists to the United States. She died in 2013.

Help after the Tsunami

On March 11, 2011, a magnitude 9.0 earthquake struck northern Japan, triggering a devastating tsunami. As with many other tragic disasters, Israel was one of the very first, and largest, responders to the disaster. 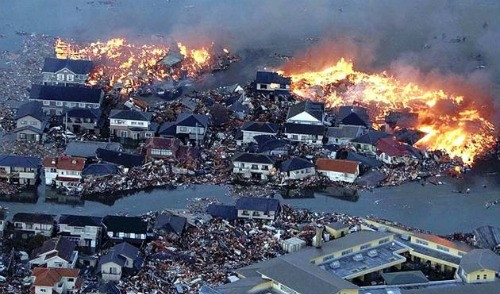 As Israel’s Ministry of Foreign Affairs rushed to send the initial aid shipment of tens of thousands of emergency items to Japan, Japan’s ambassador to Israel at the time, Haruhisa Takeuchi, issued a public declaration: “I thank you, the crew of medical personnel, from the bottom of my heart, for volunteering to help in the aftermath of this tragedy and for carrying out this difficult mission.” 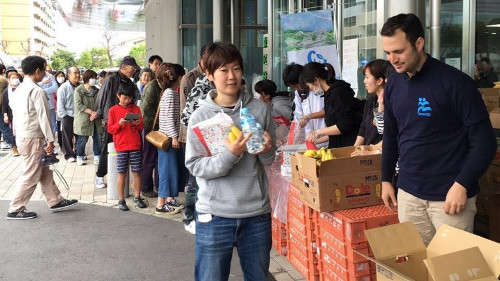 Once the initial aid shipment was sent, Israeli groups established a long-term presence in Japan, training aid workers to help traumatized victims regain their mental health. Meirav Tal-Margalit, a volunteer with the international Israeli humanitarian group IsraAID, explained why Israeli volunteers were so effective: “Israel, sadly, is pretty much a trauma lab… We have extensive experience in this field, and the tools we use here (in Israel) have been proven effective worldwide. We make cultural adaptations, of course, but in the end we are all human and we share the same fears and the same dreams.”

As Japanese cuisine has gained popularity worldwide, Jewish consumers have embraced it with a passion. According to the New York Times, Borough Park, New York’s largest Chassidic community, has 62 sushi eateries. According to Rabbi Elefant, the Chief Operating Officer of the Orthodox Union’s kosher division, 80%-90% of New York’s kosher restaurants serve sushi. 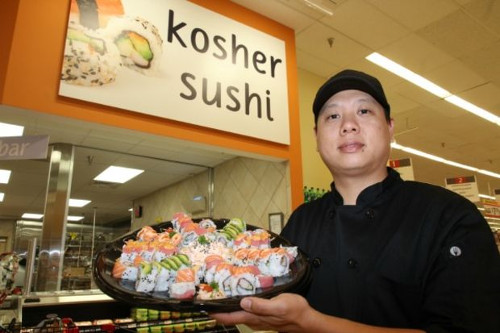 “It used to be that what defined a Jewish community was a synagogue and a kosher butcher… Then it was a kosher pizza shop,” Rabbi Elefant explained. “Now it’s a kosher sushi shop.”

The choice of kosher sushi, and other Japanese foods, is set to expand: both the Orthodox Union and Britain’s KLBD kosher certification have recently opened offices in Japan to help meet the growing market for kosher Japanese foods and drinks worldwide.

Why Candles Are a Must for the Ultimate Shabbat Experience

My Grandmother, a Sephardi Lioness