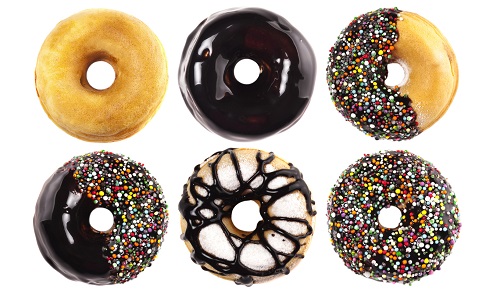 Donuts, or sufganiyot in Hebrew, are a quintessential part of Hanukkah in Israel and much of the Jewish world.  Fried in oil, they recall the miracle of oil that burned for eight days.

Fried dough - the precursors to today’s donuts - was enjoyed in ancient times throughout Greece and Rome.  Strips of dough were fried, often in olive oil, and then sprinkled or spread with ingredients to add flavor.  One popular coating was honey. The classic Greek dish loukoumades - fried dough coated with honey and sometimes sprinkled with cinnamon, sesame, or other ingredients - recalls this ancient dish. 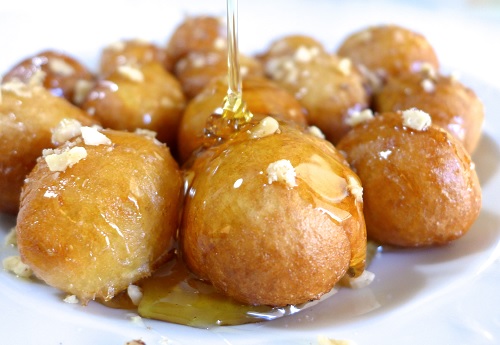 Another popular coating for these early doughnuts was garum, a type of fermented fish sauce that was incredibly popular in ancient Greece, Rome and Byzantium.  Food historian Sally Grainger likens garum to ketchup in the ancient world, and it seems that ancient Israel was no stranger to this savory donut topping: 2,000 year old jugs of garum were found in King Herod’s palace atop the ancient fortress of Masada.  Modern scientists analyzing the contents of the garum jugs found that they were likely imported all the way from Spain.

Fried dough was popular throughout the Middle East during the Medieval period.  These donuts differed from ancient pastries in that they were made with yeast, much like modern doughnuts are today.  Because too much sugar kills yeast, these doughnuts weren’t terribly sweet, and it was popular to drench them in sugar syrup once they were cooked. 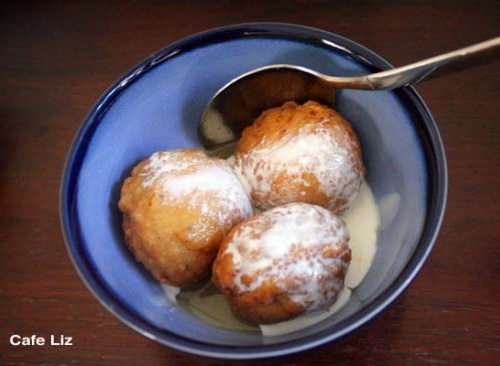 These Middle Eastern delicacies gradually spread into Europe, in part spread by Jewish merchants and cooks.  To this day, many Sephardi Jews prepare “Bimuelos” for Hanukkah: delicious yeast doughnuts which are first fried and then drenched in a sugar syrup, which often flavored with lemon, rose water or orange-blossom water.  Some Egyptian Jewish communities call these sticky types of sweets “zalabia”; in Iraqi Jewish communities they are sometimes called “zengoula”.

The first recipe for a jam-filled donut was published in Germany in 1485.  At the time, many donuts were filled with savory fillings such as fish or mushrooms, but it seems that sweet doughnuts were becoming popular too.  “Gefullte Krapfen” is a recipe for a dollop of jam placed between two rounds of yeast bread and deep fried in lard.

Donuts soon became popular across Europe, especially after it became more common to keep chickens and eggs were more plentiful; the addition of eggs to the yeast dough of doughnuts rendered denser dough that absorbed less oil.  Germanic cooks soon were cooking Berliners, as they called their fried yeast-based donuts.  In Austria, donuts were called krapfen, and in Poland, they were known as paczki. 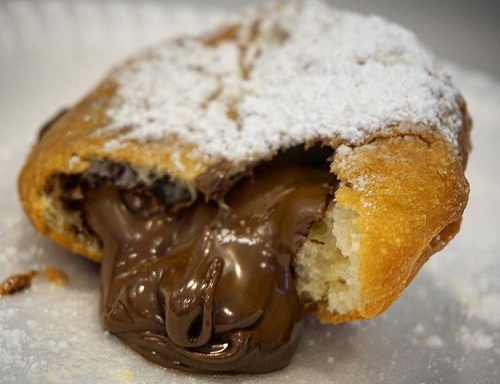 Jewish cooks in Europe made one key change to each of these delicacies: instead of frying donuts in lard, they substituted other fats, including schmaltz and goose fat.  In Poland, Jews called their variation ponchiks, and soon adopted them as a Hanukkah specialty.

Coffee and a Donut

In the 1700s and 1800s, Europeans began eating donuts as an accompaniment to a new drink that was sweeping Europe: coffee.  Jews were highly instrumental in spreading the taste for coffee throughout Europe.  The first coffee houses in Europe, opened in 1632, in Livorno, Italy, were opened by Jews.  England’s first coffee house was opened in Oxford in 1650 by a Jewish immigrant from Lebanon called “Jacob the Jew”.

Jews owned many coffee houses in France, Germany, the Netherlands, and elsewhere, and in many cases offered pastries - including doughnuts - to go with the new beverage.  As coffee gained in popularity, so did donuts: the perfect accompaniment to a hot cup of coffee in the morning or for an afternoon snack.

Donuts were introduced to the New World by Dutch settlers and were a popular home-made treat.  During World War I, both the Red Cross and Salvation Army gave American servicemen donuts as a tasty treat; after the war, thousands of servicemen returned home with an ever greater taste for donuts than ever before.  Across America, local bakeries ramped up their donut production.  Donuts were still a local delicacy though, of varying quality, until a Jewish immigrant invented the first means of mass producing donuts.

Adolph Levitt was a Jewish refugee from Russian pogroms who moved to New York and opened a store in Harlem, in which he made donuts.  In 1920, he devised an automated donut making machine, allowing cooks to produce hundreds of high-quality donuts a day.  In 1925, Mr. Levitt produced a donuts mix that bakers could use with his machines, guaranteeing consistent quality. 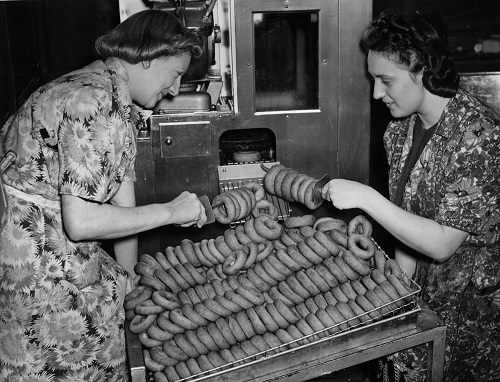 The demand for donuts exploded.  Mass produced doughnuts, made using Mr. Levitt’s machines, were called “the food hit of the Century of Progress” at the 1934 Chicago World’s Fair.  Donut production was also affected by strict American fire safety laws, which made it difficult for ordinary bakers to conduct large-scale frying operations.  More and more, specialist donut making companies produced America’s donuts, and sold the cakes to restaurants, bakeries and cafeterias.  By the 1950s, Adolf Levitt’s company, the Doughnut Corporation of America, was selling over $25 million worth of donut making equipment each year, and donuts were America’s favorite pastry.

In the mid-20th Century, William Rosenberg, a Jewish son of immigrants who was living in Dorchester, Massachusetts, operated a corporate catering business.  He noticed that coffee and donuts alone accounted for nearly half of his business, and quit to focus on donuts and coffee full time.  He opened a donut shop in 1948, and introduced an innovative new gimmick: offering 52 varieties of donuts, enough for customers to sample a new donuts type each week of the year.

Within a few years, Rosenberg began franchising other donut shops, and he soon changed the name of his chain from the original name, “Open Kettle” to something more catchy: “Dunkin’ Donuts”.  By the time Rosenberg died in 2002, Dunkin’ Donuts had over 5,000 outlets, including 40 under kosher supervision, in 40 countries around the world.  Dunkin’ Donuts’ success had also spawned a number of imitators, ensuring that the craze for doughnuts continued to grow.

Always popular, donuts have become even more sought after in recent years.  In the United States, it’s estimated that consumers spend over half a billion dollars on the round confections annually.  In the US, convenience stores alone sold 391 million donuts in 2014.  Canadians might consume the most donuts in the world: they have more donut shops per capita than any other country.  Britain is in the midst of a donuts moment: the Daily Telegraph called donuts Britain’s new favorite treat in 2017.

In Israel, plump, jam or custard-filled sufganiyot, as donuts are known in Hebrew, are enjoyed each year at Hanukkah.  One recent survey found that 80% of Israelis eat at least one donut during the eight-day festival. 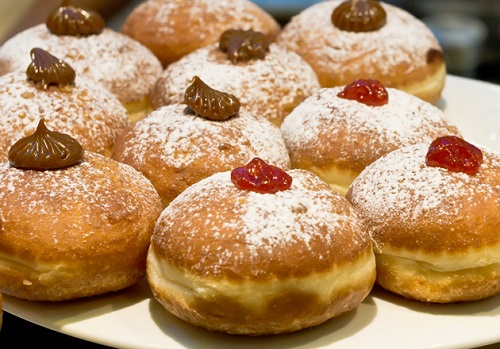 Sufganiyot derive their name from a spongy dough that’s mentioned in the Talmud: sofgani.  These Israeli confections aren’t doughnut shaped at all: instead of having a hole in the middle (which helps create a more evenly cooked doughnut), sufganiyot are baked round, then injected with a filling after cooking.  About 70% of sufganiyot are stuffed with jam, but Israeli bakers experiment with other fillings, such as caramel, espresso cream, chocolate, halva - even fillings flavored like the popular Israeli peanut snack Bamba.

Each year Israelis consume about 24 million sufganiyot.  The Israeli Defense Force alone buys about half a million sufganiyot for the troops.  In recent years, sufganiyot have become popular outside of Israel, as a tasty addition to the Hanukkah holiday table.

The Blazing Mezuzah
Kubaneh, Yemenite Bread with Spicy Tomato Sauce
Vayelech 5783: Regret and Repent
Rabbi Sacks: Focus On the Important, Not the Urgent
Comments
MOST POPULAR IN Israel
Our privacy policy
Aish.com Is Looking for Great Writers

Kubaneh, Yemenite Bread with Spicy Tomato Sauce
Vayelech 5783: Regret and Repent
Rabbi Sacks: Focus On the Important, Not the Urgent
Put Your Foot Down: Are Human Feet Poorly Designed?
Everything Bagel Pizza
Jews and Weight Loss
Scientist Asserts Earth Was Designed
Save the Children: Yvonne Nèvejean and Queen Elisabeth of Belgium
Three Ways to Make Yom Kippur Meaningful
The Joy of Fasting
1 2 3 … 2,913 Next »