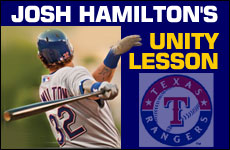 The Texas Rangers offer lessons for achieving a common goal.

The ginger ale was flowing all over the Texas Rangers on Friday night. They had just defeated the defending world champion New York Yankees – to win the American League pennant and earn a ticket to the World Series.

Ginger ale, you ask?! Don’t sports teams usually celebrate by spraying and pouring champagne on each other, and, of course, drinking it?

Indeed, the story behind the ginger ale party reveals how the Rangers made it to this year’s World Series.

The Most Valuable Player of the Championship Series is Josh Hamilton, who hit an incredible four home runs in the six-game series, and was hitting so well that the Yankees intentionally walked him most of the time. It is safe to say that the Rangers would not be heading to the World Series without Hamilton and no one could be more fitting for the MVP award.

Who is this Josh Hamilton?

Hamilton was the number one draft pick in 1999, taken by Tampa Bay. He began his professional career in the minor leagues and was a clear prospect to make it to the Majors. But his career suddenly began to unravel. He was in a car accident and got involved with drugs and alcohol while recovering from his injuries. He then went through rehab and seemed to be on track. However, more injuries in 2002 led him back to his lifestyle of substance abuse.

Not just simple substance abuse. He sunk into heavy drug use which led to showing up late for training camp several times and eventually led to his sitting out the entire 2003 season for “personal reasons.” Hamilton was then suspended in the 2004 season for failing a mandatory drug test, and after a few more failed tests, was out of baseball completely.

Amazingly, Hamilton entered rehab again and managed to straighten out his life, leaving his drug and alcohol problem behind. The Cincinnati Reds added him to their 2007 roster, after a full three years out of baseball. That year, while playing just 90 games, he hit 19 homeruns with a .292 batting average. A remarkable comeback! He was then traded to the Rangers and made the All-Star team three years straight. This year he led with the Rangers with 32 home runs, 100 RBI’s, and an incredible .359 batting average, winning the American League batting championship.

No one can ever say they are completely lost and irredeemable.

Hamilton has become a lecturer for youth groups throughout the United States, especially for faith-based groups. He explains that his relationship with God is what brought him back from his life of darkness. His story, he says, demonstrates that no one can ever say they are completely lost and irredeemable. When Josh was handed the MVP trophy he declared, “First of all, I want to thank God.”

And now he has added the crowning achievement of his career, batting .350 with four home runs in the American League Championship series.

Josh Hamilton is a metaphor for the Texas Rangers franchise. In their 49-year history, they never once made it to the World Series. They were perennial losers – considered irredeemable.

Yet just as Josh Hamilton turned his life around, he no doubt inspired the Rangers to recognize that despite their losing reputation, they too could recover and make it to the World Series. 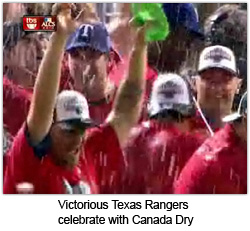 All for the Team

Which brings us back to the ginger ale.

When the Rangers clinched the division title, Hamilton was missing during the traditional club house celebration. After hugging his teammates on the field, he quickly ran to shower and left. Josh is so concerned about a relapse that he doesn't even want to be around the smell of champagne. His teammates noticed his absence and ordered large plastic bottles of ginger ale to pour on each other when they beat Tamp Bay in the Division series, and on Friday night after beating the Yankees in the Championship series.

Winning a league championship requires a group that not only has great players, but a team that believes in itself and displays incredible teamwork.

The way the team rallied around Hamilton during their celebration demonstrates that they have that last component – the friendship, camaraderie and sensitivity to others – needed for a team to win. It’s no wonder that after thanking God upon receiving the MVP trophy, Josh said, “I don’t want to talk about myself, I want to talk about my teammates. I love them so much.”

The Torah teaches, "And He (God) is King in Yeshurun (Israel) when the leaders of the nation are gathered together, together the tribes of Israel" (Deut. 33:5). God can only truly be our King with all the success as a nation that this would bring when we are united as one unit.

This point is so crucial to success that the Bible even says that the wicked king Achav ― whose generation was steeped in idolatry ― had God's blessing for success. Why? Because the people were united in respect for one another.

We need to get into the habit of doing tangible actions to display this unity, and for all Jews to truly feel as one. During the times of the Holy Temple, Jews joined together to reinforce their unity every single year. For the mitzvah of "machatzit hashekel," the annual half-shekel donation to the Temple, people did not donate a full shekel since that would imply that they were capable of individual accomplishments. The half-shekel demonstrated, in a tangible way, that they could not completely achieve anything on their own. It was only through the entire nation working and experiencing everything together as one unit, that we could achieve the highest mutual benefit.

Can you imagine how great the Jewish people would be if we all truly cared and loved each other, as members of the same team, striving for a goal together? Surely we could fulfill our mandate of tikkun olam (repairing the world), inspiring all humanity, and ushering in that era of peace we all so desperately seek and need.

God's Inception
The Blue Beyond
Great Place to Live
Is Eating Supposed To Be Spiritual?
Comments
MOST POPULAR IN Current Issues
Our privacy policy