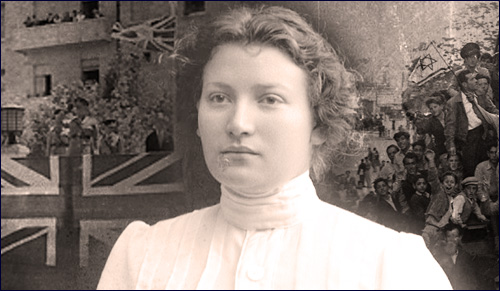 The Aaronsohn siblings founded an espionage ring in Zichron Yaakov to help Britain defeat the Turks.

November 11 marks Armistice day, the anniversary of the end of World War I.That bloody conflict drew to a close as Winston Churchill famously described, at 11am, the Eleventh Hour of the Eleventh Day of the Eleventh Month in 1918.

Amid the ceremonies marking this day around the globe, few, if any, will remember the courageous band of Jewish spies who formed the top-secret organization NILI, based in the Israeli town of Zichron Yaakov, who spied for Britain during the War. British intelligence official Baron William Ormsby-Gore said that NILI was “admittedly the most valuable nucleus of our intelligence in Palestine during the war.” A secret letter thanking the NILI network acknowledged that Britain could not have won the War without the aid of the NILI spies.

The heroes who made up NILI are all but forgotten. As we recall World War I a century later, let’s reclaim the legacy of the Jews of NILI and proclaim their decisive contribution to the Allied victory to the world.

The story of the NILI spy ring begins in Zichron Yaakov, a town settled by Jewish immigrants from Romania in 1882. They were part of a group of idealistic Jews who were beginning to buy land in the Land of Israel, then controlled by the Ottoman Empire, and establish Jewish farms and towns. When Romania gained independence from the Ottoman Empire in 1878, it effectively stripped most of its Jews from citizenship and began a system of anti-Semitic persecution. Many Romanian Jews fled to the United States. Others turned to the Land of Israel as a haven.

A hundred Jewish families moved from Romania to Zichron Yaakov in the 1880s. Among these were Ephraim and Malkah Aaronsohn and their six children.

One of the Aaronsohn’s sons, Aaron, became one of the world’s foremost agronomists. In 1906, he discovered the genetic forebear of wheat and in 1909 he established the Jewish Agricultural Experiment Station, where he experimented with adapting new growth to the arid conditions of the Middle East. A passionate Zionist, he travelled the world, explaining to people how Jewish farmers were transforming the Land of Israel, making the desert bloom. 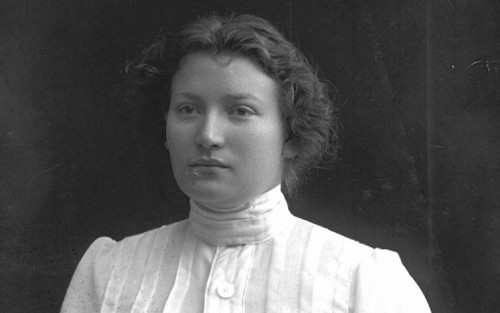 In 1914, Sarah married an older man, a Jewish immigrant from Bulgaria, and moved with him to Istanbul. The marriage was an unhappy one, and the following year, as Turkey was in the midst of fighting in World War I alongside Germany, Sarah left her husband and travelled home by train to Zichron Yaakov.

The sights that Sarah saw from her train carriage as it moved through the Ottoman countryside horrified her. Ottoman Turks were in the midst of conducting what would be known as the Armenian Genocide, which saw the murder of one million men, women and children during World War I. Sarah later described seeing hundreds of bodies being loaded onto trains, and witnessing the brutal murder of up to 5,000 Armenians, whose bodies were then piled in a pyramid with kindling, and set on fire. 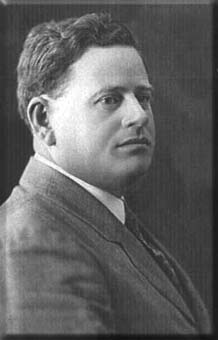 The Ottoman Turks who administered the Land of Israel made no secret of their hatred of Jews, and Sarah feared that the genocide she’d witnessed against the Armenians of the Ottoman Empire would next be directed against Jews if the Ottomans won the war. When she returned to Zichron Yaakov, she was determined to do all she could to aid Great Britain, which was fighting Ottoman Forces across the Middle East.

A World at War

With the outbreak of World War I in 1914, the Ottoman Empire had joined with the Central Powers – Germany and Austria – to fight the allies, led by Britain and France. The Jews living in the Land of Israel, which was then under Ottoman rule, found themselves the target of anti-Semitism. The Ottoman Empire ruled that Jews and Christians must be drafted to fight – or else pay ruinous taxes to be exempted from military service.

In 1914, Sultan Mehmed V announced that that the Ottoman Empire was joining the Great War – and also declared that this was a jihad, a religious war against non-Muslims as well. As historian Eugene Rogan recounts, “On 14 November ... the call for holy war (was) read out in public to a large crowd gathered outside the Mosque of Mehmed the Conqueror in the sultan’s name. The crowd roared its support.”

Inside the Jewish settlements, panic ensued. Were the Jews, like the Ottoman Empire’s Armenians and other minorities, going to become target of hate and violence?

The God of Israel Does Not Lie

The Aaronsohns decided to do what they could to support Britain in the war against the Turkish Ottomans. They founded a secret group, aided by their brother-in-law Avshalom Feinberg and close friend Joseph Lishansky. About 40 other young Jews joined the group, which was dubbed NILI, an acronym for the Biblical phrase Netzah Yisrael Lo Yeshaker, The Eternal One of Israel does not lie (Samuel I 15:29). 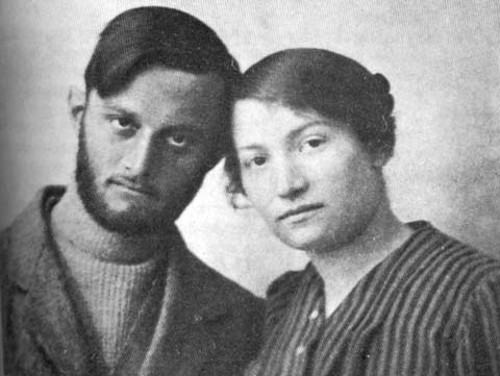 NILI wanted to help Britain invade the Land of Israel from their bases in Egypt, but at first British forces rebuffed NILI’s top-secret overtures. Finally, in late 1916, Aaron Aaronsohn managed to cross Turkish lines and traversed the Sinai Peninsula to reach Cairo, and convince British forces there to trust the Jewish spy ring.

Sarah took over leadership of NILI. Together, the spies of NILI gathered intelligence on Turkish troop movements, fortifications, railroads, water locations, troop movements, and weather patterns. Sarah encoded messages and communicated with British headquarters by sending secret codes to the British warship Managam anchored off the coast of Palestine every two weeks. At first, the NILI spies used light signals to convey information to the ship.

When British troops stopped sending the frigate to pick up NILI’s messages, the Jewish spies used homing pigeons, sending Britain’s General Edmund Allenby valuable information that would enable him to traverse the Negev Desert and attack Turkish troops in Beersheva.

NILI also received funds from supporters in America and helped distribute money to the Jews in Ottoman-controlled Israel who were near starvation due to Turkish anti-Semitic policies and ruinous taxes on the Jewish community. The Ottoman forces had no idea that Sarah was leading the Middle East’s largest spy ring.

In September 1917, one of NILI’s homing pigeons landed on a house belonging to the Turkish governor of Caesarea. Ottoman officials found the message the bird carried and decoded it, realizing that a large pro-British spying ring was operating with impunity somewhere in northern Israel. They made finding the spy ring’s members and leaders their priority.

One by one, Ottoman forces rounded up members of the NILI spy ring, using torture to extract information about other members. Finally, on October 1, 1917, Sarah Aaronsohn was arrested and taken to a makeshift Turkish prison in Zichron Yaakov. For several days, she watched her father being tortured. Then she was brutally tortured herself. Drawing on near-superhuman reserves of strength, Sarah refused to divulge information about NILI. Instead, she taunted her captors, assuring them they would lose the war and be punished for their oppression of Jews and their massacre of Armenians. 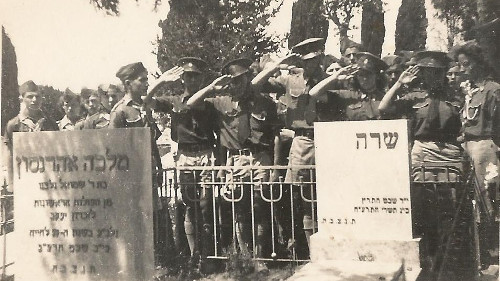 After nearly a week of agony, Sarah was informed that she would be transferred to prison in Damascus where she would face even greater torture. She asked if she could be allowed to visit her family home one last time to bathe and change her clothes. Early one morning, as most of Zichron Yaakov slept, Sarah was led down the town’s main street to her family home, which stood abandoned, its inhabitants imprisoned. As Sarah walked, she sang a song about a little bird that flies away. This was no innocent tune; it was her final signal to her surviving NILI comrades that the ring was broken and they were to cease any further activity in order to save themselves.

Once in the house, Sarah opened a secret compartment in a wall and retrieved a hidden handgun. Concealing the gun in the folds of her dress, she entered the bathroom and turned on the water. She scribbled a hasty note, tossed it out of the window and then shot herself in the mouth. Instead of dying instantly, she lingered for three excruciating days before passing away on October 10, 1917.

On December 11, 1918, British troops entered Jerusalem. One year earlier, Britain had issued the landmark Balfour Declaration, throwing its support behind the establishment of a Jewish state in the ancient Land of Israel.

Ten months later, after brutal fighting, the Ottoman Turks finally surrendered to Britain near Megiddo, ending 400 years of Ottoman rule over the Land of Israel.

The Aaronsohn House in Zichron Yaakov

Today, the Aaronson house is a museum dedicate to the amazing accomplishment of the NILI spy ring. Among other documents and artifacts, it houses a letter from British Captain Baron William Ormsby-Gore acknowledging that Britain could not have won without the aid of the NILI spies. There is also the last letter that Sarah Aaronsohn wrote, moments before she shot herself. In it, she asks us to “describe all our suffering to those who shall come after we have passed away, and tell them about our martyrdom and let them know that Sarah has asked that each drop of blood be avenged….”

As we commemorate the Allies' victory in World War I nearly a century ago, let’s heed her words and restore the name of the valiant NILI spy ring to our memories of the Great War.

For more information, read Spies in Palestine: Love, Betrayal and the Heroic Life of Sarah Aaronsohn, by James Strodes.

Shabtai Tzvi: The False Messiah who Betrayed Judaism
Morality and Abortion: Three Views
There Are No Limits
Adam and Eve Were Vegan
Comments