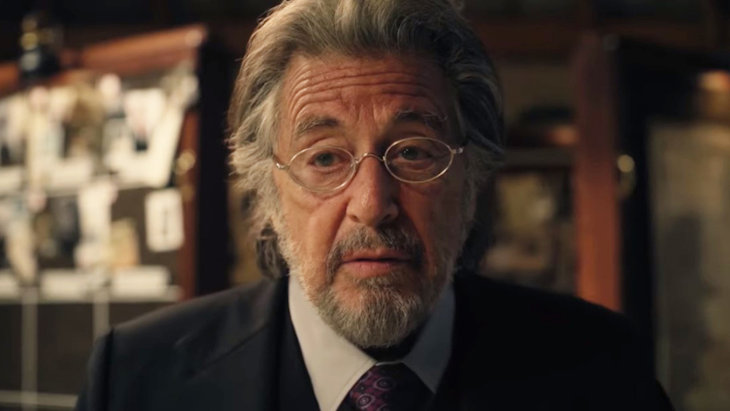 The controversial Amazon series means well but misses the mark.

Should killing Nazis be entertaining? Should we watch a shoot ‘em up comic book stylized TV series about Holocaust survivors who try to hunt down and murder Nazis in 1970s America while they are trying to reconstitute a Fourth Reich? If your answer is no, then don’t watch Hunters.

Hunters is a new Amazon Prime video series created by David Weil and executive produced by Jordan Peele. It follows Peter Parker-esque Jonah Heidelbaum whose Holocaust survivor grandmother is murdered. When he tries to find her killer he runs into wealthy and enigmatic Meyer Offerman (think Bruce Wayne meets your Zadie) and his motley crew of Nazi killers (think any bank heist movie). The whole thing is kind of like Quentin Tarantino meets Holocaust survivors.

Hunters is not based on a true story. It’s about as fake as Al Pacino’s Yiddish accent.

But should Quentin Tarantino really be meeting Holocaust survivors? Spoiler alert: the answer is no.

Hunters is not based on a true story. It’s about as fake as Al Pacino’s Yiddish accent. But there are kernels of truth buried beneath the surface which unfortunately get lost. There were indeed Nazi “hunters” who existed after the war, the most famous of whom was Simon Wiesenthal who helped find Nazis including Franz Stangl, the commander of the Treblinka and Sobibor camps. In 1977 Rabbi Marvin Heir created the Simon Wiesenthal Center and hired Ephraim Zuroff as their resident Nazi “hunter” whose work helped lead to the trials of more than 40 Nazis and their collaborators. But the operative word there is “trials”. There was no revenge taking vigilante murders. There were trials by courts of law.

Hunters tries hard to cloak itself in Jewish values. In fact, at the outset of the series Meyer Offerman says as much: “This is not murder, this is a mitzvah.” Later, Mindy Markowitz, one of the gang of hunters tells Jonah, “Your savta had no choice but to be involved in this because she went through the war, but you do Jonah. She chose the darkness so that you could have the light.” But that’s not the Jewish approach, is it? We never fostered a culture of Holocaust survivors bent on bloodthirsty revenge. Their best revenge has been to rebuild vibrant Jewish families with children and grandchildren who carry on the faith that the Nazis tried to snuff out.

But Hunters creator David Weil had other ideas. He said, “…to be able to show a Jewish superhero with might, with power, with strength, not just a Jew who is as the media often portrays us, as ineffectual or intellectual only or nebbishy … that was so important to me.” Great idea, poor implementation.

Here’s a thought: maybe there are lots of Jewish superheroes out there but people are just using the wrong definition of what makes a superhero?

Jews don’t believe in turning the other cheek. We practice robust self defense, not vengeance.

Now, some anti-Semites out there might say, “Of course there’s a gang of bloodthirsty Jews seeking murderous revenge – it’s called the Israeli Army!” But we know how to answer those anti-Semites, don’t we? Israel is the lone Jewish country in the middle of a sea of hostile Arab nations many of whom are committed to Israel’s destruction. There are countless terrorist groups operating inside Israel’s borders and the Israeli army has to do whatever is in its power to defend its citizens. That’s why the Israeli army is called the I.D.F. – the Israeli Defense Forces. Mistakes surely happen in the fog of war, but even still the IDF is the most moral army in the world.

“Well,” our anti-Semite may retort, “What about the film Munich that documents how the Mossad hunted down those responsible for killing the 11 Israeli Olympic athletes?” Those terrorists were still actively engaged in operations against Jewish people. As the Talmud says, “If someone comes to kill you, rise up and kill him first.” Jews don’t believe in turning the other cheek. We practice robust self defense, not vengeance. That’s the crucial difference.

The way we honor the memory of the six million is by committing ourselves never to forget. We rebuild our Jewish families and our Jewish state in their honor. We perform acts of loving kindness, not acts of vengeance. That’s the Jewish definition of a hero. And we want to be heroes, not hunters.

Wisdom of Spider-Man
Faith: the Axis Upon Which the Wheel of Science Turns
Love - Not Just About Chemicals Anymore!
Is There a Moral Code in a Virtual World?
Comments
MOST POPULAR IN Jewlarious
Our privacy policy