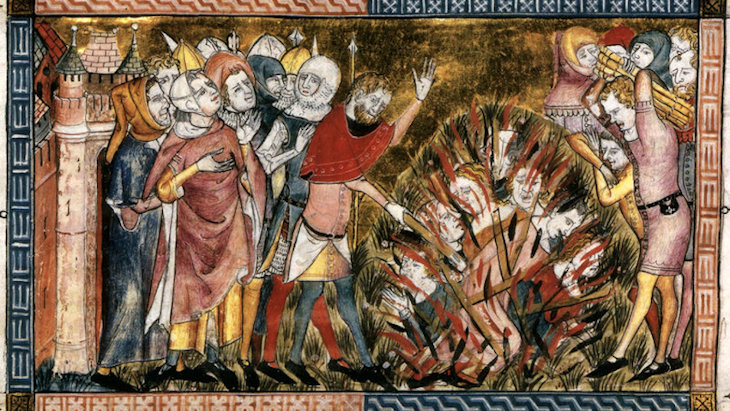 On Valentine’s Day 1349 thousands of Jews were burned to death, accused of poisoning wells.

Most people associate February 14 with love and romance. Yet hundreds of years ago Valentine’s Day saw a horrific mass murder when 2,000 Jews were burned alive in the French city of Strasbourg.

The year was 1349 and the Bubonic Plague, known as the Black Death, was sweeping across Europe, wiping out whole communities. Between 1347 and 1352, it killed millions of people. Historian Ole J. Benedictow estimates that 60% of Europeans died from the disease. One Italian writer recorded what the plague did to the city of Florence, where he lived: “All the citizens did little else except to carry dead bodies to be buried… At every church they dug deep pits down to the water-table; and thus those who were poor who died during the night were bundled up quickly and thrown into the pit.”

Bubonic Plague is caused by a bacterium called Yersinia pestis and is most commonly spread by fleas that live on rodents like rats and mice. The disease still exists, and sickens thousands of people each year, including a handful of people in the United States and other developed countries. Caught early, Bubonic Plague is treatable with modern medicines. In the Middle Ages, of course, no medical treatment existed to mitigate the Plague’s devastating effects. It’s estimated that about 80% of people who contracted the Plague in Medieval Europe died. 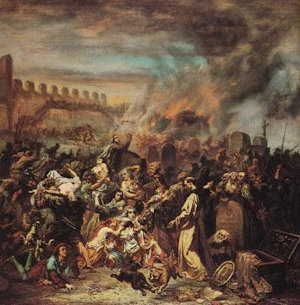 The Massacre of Jews at Strasbourg, by Eugene Beyer

The first major European outbreak of Plague occurred in Messina, Italy, in 1347, and it spread rapidly from there. Historians estimate that the largest wave of Bubonic Plague – the pandemic that was dubbed The Black Death – originated in Central Asia. As it began sweeping through European communities, terrified people cast about for someone to blame. Jews were a natural choice. As the Black Death advanced, Christians turned on the Jews in their midst, accusing them of spreading the Plague by poisoning Christian people’s wells.

Many Christians leapt to accuse Jews of deliberately spreading the disease to harm Christians.

Jews, often forced into overcrowded and fenced-in Jewish quarters, suffered from the Black Death at rates comparable to their Christian neighbors. Yet even though it was apparent that Jews were sickening and dying as well, many Christians leapt to accuse Jews of deliberately spreading the disease to harm Christians. Historian Heinrich Graetz described the fevered atmosphere of hate and accusations leveled at European Jews: “...the suspicion arose that the Jews had poisoned the brooks and wells, and even the air, in order to annihilate the Christians of every country at one blow”. (Detailed in Graetz’s History of the Jews, 1894).

These attacks were horrifically violent. In Cologne, Jews were locked into a synagogue which was then set on fire. In Mainz, the entire town’s sizeable Jewish community was murdered in just one day. Jews were massacred and tortured across Europe, in Spain, Italy, France, the Low Countries, and the Germanic Lands. Emperor Charles IV, the Holy Roman Emperor, decreed that the property of Jews murdered for supposedly spreading the Plague could be seized by their Christian neighbors with impunity. With this financial incentive to kill Jews, the attacks only intensified.

In 1349, a group of feudal lords in the Alsace region of what is, today, France, attempted to make the attacks on Jews official. They assembled in the French town of Benfeld, and formally blamed Jews for the Black Death. They also adopted a series of steps to target Jews, singling Jews out for murder and calling for them to be expelled from towns. This “Benfeld Decree” had an immediate effect as Jews in thirty communities across Alsace were attacked. Only the city of Strasbourg, which had a large Jewish community, resisted, protecting their city’s Jews.

The atmosphere in Strasbourg in early 1349 was tense. The Black Death had not yet reached the city, though anxious citizens awaited the first case of victims to sicken and die any day. Strasbourg’s Bishop Berthold III railed against Jews, but the city’s elected officials held firm. Mayor Kunze of Wintertur, Strasbourg’s sheriff, Gosse Sturm, and a local lay leader named Peter Swaber all vociferously defended and protected Strasbourg’s Jews.

On February 10, 1349, the restless citizens finally had enough. A mob rose up and overthrew Strasbourg’s city government, installing an unstable government “of the people” instead. This hateful group that was now in charge was a strange amalgam: led by the local guilds of butchers and tailors, it was financially backed by local nobles who hated the Jews and hoped to seize their property. One of this new mob’s first acts was to arrest the city’s Jews on the charge of poisoning Christian wells in order to spread the Black Death. 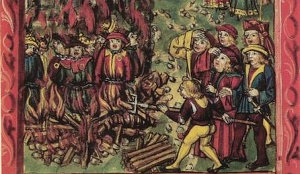 Friday, February 13, 1349 was a black day for Strasbourg’s Jews. Normally, they would have spent the day preparing for Shabbat, baking challah, cleaning their homes and preparing festive meals. Instead, under heavy armed guard, women, children and men were dragged from their homes, imprisoned, and charged with murder. Any Jew who was willing to convert to Christianity would be spared, they were told. As the terrified Jews awaited their fate, the city’s new governors were building a huge wooden platform that could hold thousands of people inside the Jewish cemetery. For the Jews, the next day was Shabbat. For Strasbourg’s Christian citizens, the next day was February 14, St. Valentine’s Day. They designated this saint’s day as the date on which they would execute Strasbourg’s entire Jewish population.

In the morning of Valentine’s Day, a large crowd assembled to watch. A local priest named Jakob Twinger von Konigshofen recorded the grisly massacre: “they burnt the Jews on a wooden platform in their cemetery,” he wrote. “There were about two thousand of them.” Some young children were yanked away from their parents’ arms, and saved so that they could be baptized and raised as Christians. For most Jews, however, no such aid arrived. As the enormous wooden structure went up in flames, around 2,000 thousand Jews were slowly burned alive.

Their murder took hours. Afterwards, eager townspeople combed through the smoldering ashes, not searching for survivors, but looking for valuables. von Konigshofen recorded the financial motive for this enormous massacre: “...everything (all debt) that was owed to the Jews was cancelled… The council...took the cash that the Jews possessed and divided it among the working-men proportionately. The money was indeed the thing that killed the Jews. If they had been poor and if the feudal lords had not been in debt, they would not have been burnt.”

Strasbourg’s mob government and citizens faced no criticism. A few months later, Emperor Charles IV officially pardoned the citizens of Strasbourg for killing their town’s Jews and for stealing their money.

With the passage of so much time, many have seemed to forget the cataclysm of violence that led to the torture and murder of so many Jews during the Black Death. Yet we owe it to the victims to remember.

Israel is the New Jew