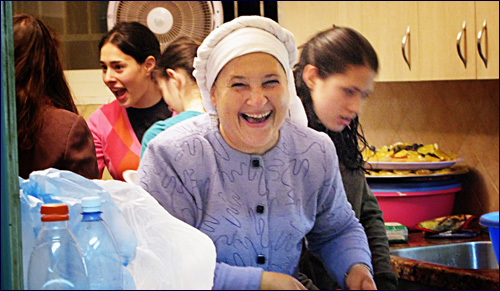 How did an ordinary Jew from Brooklyn become one of the greatest lights of our times?

In honor of Henny Machlis's second yahrzeit this week, Aish.com is refeaturing this article.

What qualified Henny Machlis, who passed away this past Friday at the age of 57, as one of the world’s greatest Jewish women?

Jerusalemites would say it was her cooking for and serving up to 300 guests every Shabbos in her cramped Jerusalem apartment. The guests – almost 150 for the Shabbat night meal and over 100 for the Shabbat day meal – ranged from curious tourists and university students to lonely widows and singles to drunks and mentally ill people who considered the Machlis family’s love and warmth more delectable than even their ample food. Henny cooked 51 weeks a year (except only for the week of Pesach) from her tiny kitchen. Starting as newly-weds 35 years ago, the Machlises’ open Shabbos table expanded gradually over the years until the overflow of guests had to be seated in the courtyard and outside the front door. Henny’s great dream was to enclose the courtyard so guests could sit there even in the winter. Alas, she never lived to see her dream’s fulfillment.

The Machlises’ chesed was not restricted to Shabbat. Homeless people slept on their couches, some for weeks at a time, and those whose mental instability might have endangered the Machlises’ fourteen children were accommodated in the family van. When Rabbi Mordechai Machlis would leave for work as a teacher in the mornings, he would know how many van guests he had by the number of shoes in the windshield.

For those who gauge greatness by the level of selflessness a person attains, Henny also scored off the charts. At her funeral her oldest son Moshe recalled how, after he got married and moved away to start Kollel (full-time Torah learning), his mother encouraged him: “If you ever aren’t making it financially, tell me and I’ll sell my jewelry.”

“Ima,” Moshe called out in a tearful voice, “you forgot that you didn’t have any jewelry. They had all been stolen by the guests over the years. And your diamond ring – you loaned it to someone twenty years ago, and never got it back.”

Being treated for cancer in New York’s Sloan-Kettering, Henny was sometimes visited by the unfortunates who – even those decades older than she – considered Henny their mother. When one homeless woman came to visit, Henny gave her her bed. A relative discovered Henny, wrapped in a hospital blanket, wandering in the hospital corridor looking for a place to lie down.

Henny’s son Moshe was pushed aside at the crowded funeral by one of the Machlises’s mentally ill “regular guests,” who proclaimed, “I have to get closer. She’s my mother.”

For those who equate spiritual greatness with God-consciousness, with the ability to see God’s hand always and everywhere, Henny had indeed achieved those spiritual heights. At the funeral, a tearful Rabbi Machlis related just one story: He invited a destitute man whom he always saw at the Kotel (Western Wall) to come home with him to eat. That day Henny served her homemade whole-wheat pizza. The man loved it. He came back to their house every day asking for a slice of whole-wheat pizza. Finally, Henny suggested that she could teach him how to make whole-wheat pizza himself. Painstakingly and with infinite patience, Henny taught him how. One night several days later, at 3 AM, there was a knock on the door. “Not on the front door,” Rabbi Machlis related. “Our front door is always unlocked. Someone was knocking on our bedroom door.”

The loud knocking woke them up. Alarmed at what must be an emergency, Rabbi Machlis went to the door and asked, “Who’s there?” When the man identified himself, Rabbi Machlis asked, “What’s wrong?”

The man replied, “I forgot how to make whole-wheat pizza. I need your wife to explain it to me again.”

Rabbi Machlis was exasperated. “At 3 o’clock in the morning, you need to remember how to make whole-wheat pizza?”

But Henny calmed him down. “It’s a test,” she assured him. “It’s from Hashem.”

Then Henny reiterated to the man, step by step, how to make whole-wheat pizza.

For me personally, the sign of Henny Machlis’s greatness was the radiant joy she emanated all the time. Whenever I ran into her, her wide smile and the joyful light she radiated conveyed that seeing me was the best thing that had happened to her all day. And although I knew that she greeted everyone the same way, I nonetheless was charged by this encounter with a holiness and saintliness that lit up the world – or that tiny piece of the world where Henny Machlis stood.

The last time I saw Henny was several months ago, when she was briefly back in Jerusalem between surgeries and treatments at Sloan-Kettering. She had already been battling metastasized cancer for a couple agonizing years. I decided to drop in at her house, and braced myself to see the battle-weary and fear-worn look that characterized other cancer patients I had known. On the path to the Machlis house, there was Henny with one of her daughters, on her way to go to pray at the grave of the tzaddik Rav Usher. When she saw me, she gave me that same radiant smile and jubilant greeting that had always been her trademark – unmitigated by the cancer, the surgeries, the chemo, the long separations from her family, and the unexpected – and unwanted – turn her life had taken. Her joyful smile conveyed not just her stoic acceptance, but her happy acquiescence with the way God was running His world.

A mutual friend told me after Henny’s death, “When I was with her, I felt embraced by God.”

The question – indeed the challenge – of Henny’s life is: How did an ordinary Jew born to a regular middleclass family in Brooklyn in 1957 become so great?

Henny kept on going and giving and loving and inspiring.

Like the rest of us, she went to college. (She graduated Stern College with a B.S. in education.) Like most of us in our twenties, she had an ideal. Hers was to share the beauty and joy of Shabbos with the whole world. Like most of us, “reality” intruded in the actualization of the ideal. For the Machlises, the tremendous scale of their success cost them over $2500 every Shabbat, a financial load that defied Rabbi Machlis’s modest salary as a teacher supplemented by donations from well-wishers. But unlike most of us, their adamantine faith in God and love for the Jewish people kept them from compromising on their ideal. They mortgaged their apartment to the hilt, took out personal and bank loans – and kept on going.

As Henny once told me: “We are living in the midst of a spiritual holocaust. Most Jews today have no idea of the beauty and depth of Judaism. How can we not do everything in our power, including going into debt, to reach out to our fellow Jews?”

The only difference between Henny Machlis and the rest of us is the voice that asserts, “I’ve done enough. I don’t have to do more.” Henny never harkened to that voice. She kept on going and giving and loving and inspiring – until last Friday, when she was called to her Heavenly reward.

Now it’s up to the rest of us.

Searching for My Lost Tribe

Rising from My Wheelchair: Judaism and the Mystery of Healing

Surviving My Near Fatal Marriage
The 21st President of the United States: Failure or Inspiration?
Hiding Their Jewishness
The Jewish Pope: Following the Questions Home
Comments