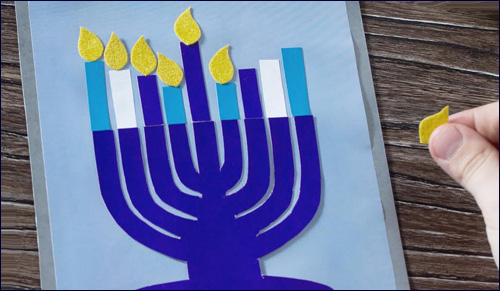 In the midst of the office Christmas party, I shocked myself by asking, “Are we doing anything for Hanukkah?”

I moved to New York as a non-religious Jew in the mid-80s to pursue my interest in playwriting. Throughout a number of less than glamorous jobs, I worked sporadically on my current script, A Neurotic’s Guide to Manhattan, a comedy. It finally got to see the light of day, running for 16 weeks at an Off-Off Broadway Greenwich Village theatre. I was on my way!

One of my play’s directors worked at a company that consulted for Fortune 500 firms. Aware that the play ‘paid’ me two free seats for every performance, she made some introductions and viola! – I became a proofreader at a prestigious Manhattan firm.

My beautifully appointed office space testified to my upward move. A decent paycheck and one’s own desk can definitely inflate one’s feeling of self-worth.

I began attending a reform synagogue in my Brooklyn neighborhood on Friday nights because one of its members, who liked my writing, was a lyricist for musical theatre. I was making new friends, writing plays, and being assigned more challenging jobs at work. My fellow proofreaders and I were getting along well when some discordant changes began to arrive on the scene.

On December tenth, a sign on the bulletin board invited us all to the staff holiday party. Stockings filled with striped candy canes decorated the walls. Mixed in with these symbols, overwhelmed, was a small, flat cardboard menorah, with a base on the bottom.

A few days later, the traditionally decorated tree appeared, with a smiling Santa beaming at it from a nearby wall.

One morning on my way to work, someone from Chabad handed a bag to me.

Today was the Christmas party and it somehow seemed important to bring that piece of paper with the Hebrew words I didn’t understand.

“Hanukkah candles in here,” he said, “with a menorah and transliterated blessings. The holiday begins tomorrow night.”

I thanked him, although what to do with them was a mystery. The next morning I left the candles home, but took the blessings with me. Today would be the Christmas party and it somehow seemed important to bring that piece of paper with the Hebrew words I didn’t understand.

In anticipation of the big soiree, no gainful employment by my peers was even attempted after the clock struck twelve. When the call to party was announced, I took a yellow sticky and placed it where I was up to in my work. Two hours and two strong drinks later – and I indulged the least of my co-workers – I barely remembered that I was a proofreader.

I ate too much and basically moped through the festivities. Joy reigned supreme in that meeting room, but I was not happy. My supervisor, holding a glass of eggnog and looking somewhat plastered, came up to me.

“Yeah,” I responded unenthusiastically, and shocked myself by asking, “Are we doing anything for Hanukkah here?”

She was obviously relieved at being called away just then.

Alone amidst a hundred ecstatic revelers, I walked out of the room, not feeling the holiday spirit. I strode up to my desk, reached into my briefcase, and took out the piece of paper with the Hanukkah blessings. Although I did not know what the words meant, they had somehow become very important to me.

I read the instructions above the transliteration.

“After sunset during Hanukkah, light the candles, one for the first night to the far right, the shames in the middle, and an additional one each succeeding night.” Tipsy and fully aware that I had no candles and no menorah, I said a silent prayer that I could do something to acknowledge my holiday.

I suddenly spotted the small cardboard menorah and immediately knew what I wanted to do. Opening it, I stood it upon its base. From a blank yellow sticky paper, I cut two small ovals. Following the directions on the Chabad sheet, I read the transliterated blessings for the first night. After reciting them, I took the first oval and put it on the ‘candle’ top to the far right and a second on the ‘shames.’ It may not have been correct according to Jewish law, but it was vital for me at that moment. Far from the hubbub, I felt content.

A moment later, however, I wasn’t alone. Another worker had come to get something from her desk.

“What are you doing?”

I smiled. “Lighting the menorah in the best way I know how for the first night of Hanukkah.”

Every evening, after sunset, I stopped work, said the blessings, and put more yellow oval stickies on the menorah.

The next night, a few minutes after sunset, I stood at my desk over the cardboard menorah, said the blessings, and placed two yellow ovals plus one for the shames in their places. Last night’s visitor came to watch, along with others in my department. Impressed, they even asked questions about it.

And that’s the way the rest of Hanukkah went. Every evening, after sunset, I stopped work, said the blessings, and put more yellow oval stickies on the menorah. With each night, more and more people came to watch.

For the eighth night, in front of an overflow, enthusiastic crowd, I said the blessings and ‘lit’ all of the candles. My supervisor was by now a regular attendee.

“Alan,” she said, “next year we’re going to get a large, beautiful menorah suitable for the occasion!”

In retrospect, I could have complained that my religious rights were not being respected. Although there is a time for open rebellion, as the Maccabees so courageously and poignantly demonstrated, this experience taught me that there is also a time for quietly, and with conviction, doing what you believe is right. And good things can come from that.

Many years have passed and today I am religiously observant. I say the blessings for my wife and myself before lighting real candles. We sing Maoz Tzur, recounting the miracles of years gone by, and bless the Almighty, ‘Who wrought miracles for our forefathers, in those days at this season.’

I think back fondly to that time when yellow sticky paper and a cardboard menorah made such a difference to me and so many others.

Alan Magill is a writer, humorist, playwright and photo/poem practitioner who has written for a number of Jewish and other publications and has found that truth is often more remarkable than fiction. Alan is the director of recreation at Ateret Avot Senior Home.

My First Hanukkah in Communist Russia

Chanukah in Iowa
Bechukotai 5782: Divine Retribution
Behar 5782: Working to Live or Living to Work?
The Wholeness of Being Broken
Comments
MOST POPULAR IN Spiritual Odysseys
Our privacy policy