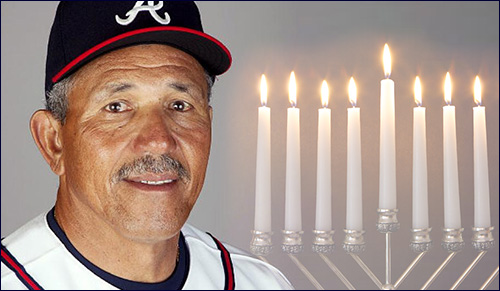 Luis Salazar and a new look at the miracle of Hanukkah.

In a great article, Sight to Behold, L. Jon Wertheim tells the story of Luis Salazar. A longtime major-league infielder and minor-league coach Salazar had been out of baseball for a year, happily sitting at home in Boca Raton. But in August 2010 he got the itch to return so, with the blessing of Graciela, his wife of 33 years, Salazar sent out his résumé. The Atlanta Braves offered him a job managing their Class-A Carolina League team, the Lynchburg Hillcats.

Salazar joined the Braves for their spring training games in 2011 and was coaching third base one March afternoon. As Wetheim tell it:

Salazar was 55, a former third baseman whose reaction times were not what they once were. No matter. He had no chance. Not with slugger Brian McCann hitting from maybe 60 feet away and the foul ball traveling in excess of 100 miles per hour. The projectile smacked Salazar in his left eye, making a hideous sound and knocking him backward down the dugout steps. He fractured his right arm in the fall, but that was the least of it. He was unconscious, concussed, and blood poured from his nose, mouth and eye, puddling around his head as he lay face down. As a helicopter transported Salazar to an Orlando trauma center, the players struggled to keep it together, not least McCann, who left the game.

Salazar regained consciousness in the hospital that night. He says he saw a white light – ”very bright, so bright” – and fell back asleep. He woke up the next day after a surgery, the first of three. “What happened?” he asked his wife. She told him. He nodded. He went to the bathroom and caught a glimpse of himself in the mirror. Then the gravity set in. “It’s scary when you don’t recognize yourself,” he said. “That’s when I knew how bad it was.”

Doctors first told him the good news. He was alive. And, blessedly, he’d suffered no brain injury. Then, a few days later, the bad news: his left eye was so damaged it would need to be removed.

Six days after he was hit, Salazar’s left eye was surgically removed, his socket suddenly resembling a garage without a car. He conceded, that was “a tough day,” but he was more focused on thanking God that he had come out of the ordeal relatively unscathed. The doctor told him that losing the eye meant only that he couldn’t be a fighter pilot. Otherwise there would be no restrictions. He put a bandage over the eye – beating others to it by making the obligatory Pittsburgh Pirates joke – and went about his business.

When Salazar was finally released from the hospital, he drove the three hours from Orlando to Boca Raton. “I needed to do that for myself,” he said. On April 15 he made his managerial debut in Lynchburg. By this point, his story had generated some media attention – particularly among Braves fans – and a capacity crowd turned out to welcome the new manager. Graciela was in the stands as well. “Just putting on the uniform, going to home plate and handing the lineup card to the umpire,” he said. “That was the best moment of my baseball career.”

During his season managing in Lynchburg, Salazar often spent the duration bus trips returning voicemails from friends. “In a way, I see more now than I did with two eyes,” he said. “I see friends, teammates I haven’t spoken to in 25 years. I notice more around the ballpark. It’s maybe crazy to say, but in some ways it’s been a blessing.”

We take as a given that the reason we light the Hanukkah candles is to see the flames. We tend to assume that the pirsumei nisa, the publicizing of the miracle, is achieved by lighting oil and commemorating a miracle from many years ago. But perhaps we are missing the point. Maybe the real purpose is not to see the flame itself but to allow the flame to illuminate the darkness and reveal what is all around us. Perhaps publicizing the miracle is not accomplished through the candle, but rather when we take a moment to consider the trials and tribulations we have been through and yet allow the light to illuminate for us how fortunate and blessed we are nonetheless.

The Jewish people’s existence after all these years and systematic attempts to eliminate us… we are the miracles. Each one of us has struggled, be it with illness, financial hardship, etc. and yet we are here, we are positive and we are grateful. That is the miracle.

The mitzvah is ner ish ubeiso, for a person to light one candle per household, and perhaps we can suggest homiletically, the mitzvah is to see the candle but more importantly to see ish (person), to see ourselves and how we are here, and to see beiso (his house), how fortunate we are to have a spouse, children, a home.

Louis Salazar says he sees more with one eye than he ever saw with two. When we light that menorah, we must see beyond what our eyes can perceive and see and appreciate the blessings and the miracles that surround us all along.

My First Hanukkah in Communist Russia

Feeling Like I'm the Only Jewish Girl in the World
Megillah Gorilla Saves the Day
Challah Reuben “Grinder”
Big OnThe Little Things
Comments
MOST POPULAR IN Spirituality
Our privacy policy
Aish.com Is Looking for Great Writers