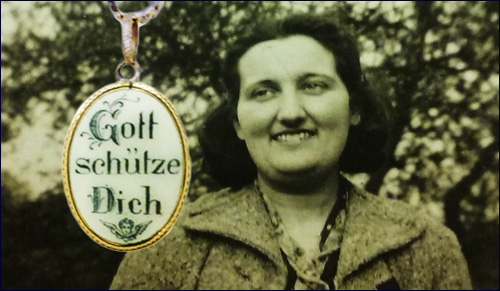 The pendant’s life-affirming message of hope gave her courage to embrace challenges throughout her life.

My grandmother risked her life for a cheap piece of costume jewelry she received when she was a baby. She smuggled it out of Nazi Europe in violation of strict rules that Jews not take jewelry with them as they fled. 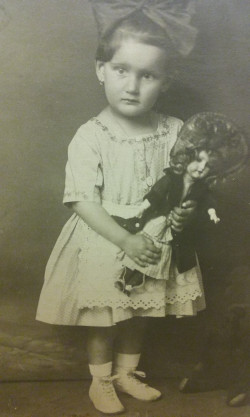 My grandmother wearing the pendant

The little pendant had a picture of a  cherub on one side and the words, in  swirling gothic German letters, “Gott Schütze Dich” (God Protect You) on the other side. Though Grandma wasn’t particularly observant, she always felt that God was indeed her protector. That belief shaped her decisions for years to come.

In 1937, that meant deciding to leave Austria. Not everyone agreed with her. Grandma was a medical student at the University of Vienna. Her family was comfortable and she’d recently met a chemistry student who would one day become her husband. 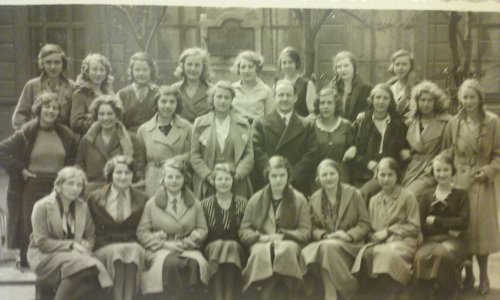 My grandmother's school in Vienna. She’s second from left in front row. Many of the girls were passionate Nazis 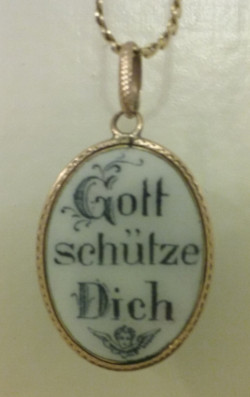 “How can you give this all up?” Grandma was often asked. But she was confident. With her steadfast belief that God was watching out for her, the fear of the unknown didn’t daunt her and she made plans to leave. 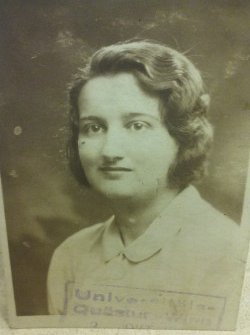 Her University of Vienna ID photo

“If you find yourself on a runaway train,” she would tell people, “you’d be a fool not to get off.” She dropped out of college and took a two-year job as a servant in London. She tucked her “Gott Schütze Dich” pendant in a secret pocket in her coat, along with some money – another violation of Austrian law that would have had serious consequences if she’d been discovered – and left everything behind.

Two years later, on the eve of war, Britain wanted to send her back to Vienna. Inspired by her example, Grandma’s parents had obtained visas to America; they even got one for the chemistry student, my future grandfather. Unable to have my grandmother sign the visa application, they forged her signature. But the forgery had been discovered and the U.S. government officials would not let her in. And Grandma’s two-year visa to Britain was nearly up. 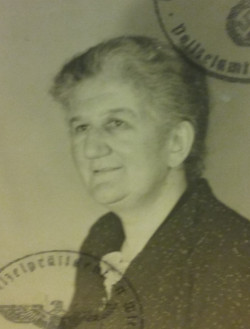 My great-grandmother's passport picture to leave Austria, with Nazi stamps

She devised a plan. Every day she visited the American embassy in London and asked for a meeting with the ambassador, Joe Kennedy. It was an audacious move. Grandma’s English was still poor, she was without connections, and in later years Ambassador Kennedy was notorious for allowing America’s quota for Jewish refugees to go unfilled during World War II. But she was single-minded in her determination, drawing confidence from the pendant she wore around her neck which reminded her that she was never alone.

After weeks of requests, Grandma was shown into Joe Kennedy’s well-appointed office. Stumbling over her English, Grandma explained how her family had visas to the U.S., and how her mother felt no option but to fill in my grandmother’s application herself. 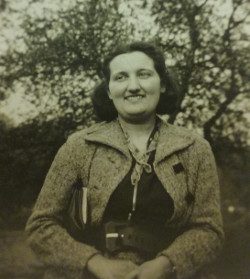 My grandmother, Francie Dubsky, in London where she worked as a servant 1937-1939

Ambassador Kennedy listened in silence, then leaned back, looked at Grandma and said the words that saved her life: “Alright Miss Dubsky, I’ll grant you your visa. America needs more girls with spunk like you.”

Life in the U.S. was hard but the same trust that Grandma showed when she was young never left her. She always felt that she wasn’t alone and that she’d somehow find the strength to confront the unknown challenges that faced her. She didn’t feel she was special; the fate of her friends and relatives in Europe showed her that sometimes there was no protection from evil. But Grandma was also keenly aware that it’s up to each of us to try to take advantage of all the opportunities in our lives. 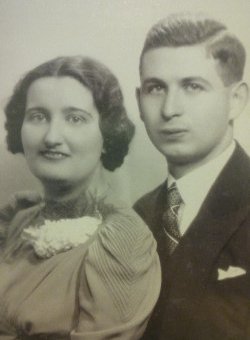 Wedding photo of my grandmother Francie and grandfather Henry Alt

Soon after arriving in the U.S., the apartment Grandma shared with my grandfather and her parents was robbed. The few meager possessions these poor immigrants had were taken; my grandmother even lost her wedding ring. But her “Gott Schütze Dich” pendant wasn’t stolen and its words continued to shape the way Grandma looked at the world. 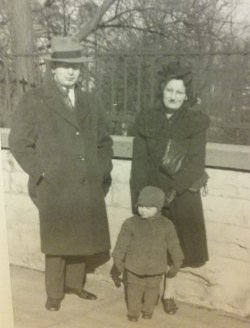 My grandparents with my father in Chicago 1944

It was important for her to join a Jewish community, something she insisted that my parents do so as well. “A family needs a synagogue,” I remember her explaining to my parents when I was a child. Grandma was fascinated by the Torah, and sometimes I went with her to her weekly classes where she’d explore Jewish texts. Grandma's fearless zest for life extended into every area, including the intellectual.

When my grandfather died at the young age of 42 in a tragic accident, my grandmother was able to find love a second time, marrying my step-grandfather when she was in her sixties. “I’ve had two wonderful marriages,” she once told me, explaining how she viewed both as presents from Above. No matter how difficult things might have been, she looked at the world as an amazing miracle in progress and never lost her wonder at it all. 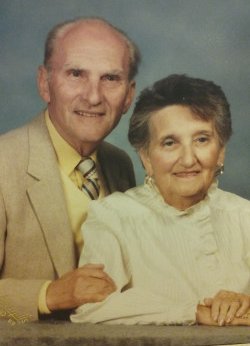 My grandmother with her second husband Frank Weinman

With her second husband, Grandma was able to fulfill her lifelong passion to visit Israel. Long before Israel was the “Start Up Nation”, when it was still struggling economically and visiting the Jewish state was difficult, Grandma believed that it was the future of the Jewish people. She learned Hebrew and encouraged me to study it as well. She kept a large picture of Jerusalem on her apartment wall. When I was young Grandma told me she believed that one day most Jews in the world would live in Israel. It seemed so improbable at the time, but today it’s the reality.

Grandma lived through some of the most seminal events in Jewish history, including the Holocaust and the State of Israel. With her motto "Gotte Schütze Dich" she saw the presence of the Divine throughout her life.

A Different Kind of Independence
Korach 5782: Visit to Lift the Spirit
That Time The Ivy League Found A Way To Limit Jewish Enrollment
Would You Rather Be Right or Happy?
Comments
MOST POPULAR IN Spirituality
Our privacy policy