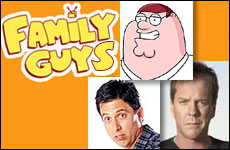 The fathers I know don’t look anything like the ones we see in the media.

With Father’s Day around the corner, I have a little advice for dads like Arnold Schwarzenegger and Dominique Strauss-Kahn: This year, don’t count on your kids sending you those sentimental cards that say “For a Special Father,” with photographs of fields of gently rolling wheat or ducks coolly coasting on a lake. In fact, be careful when you open your mail.

Whatever happened to Father Knows Best?

The painful reality of Dads Gone Bad is not new, but modern media has only made it worse. On TV, it’s been about 40 years since Father knew best. In recent years TV dads were more likely to be members of the Mafia than they were dentists or sheet metal workers. Duller than Mafia affiliation, perhaps, but at least those jobs were legal. So many TV dads have been portrayed as goons, loons or poltroons, it’s no wonder that more and more women are choosing to raise their kids solo. Often, the names of the programs told you everything you needed to know about the dads they featured. On Arrested Development, the dad used to take his clothes off for a living. On Family Guy, Dad sold his daughter for cash to pay off some debts. And that’s a comedy! Just what kind of Father’s Day card do you get dads like this? I bet even Hallmark would be stumped.

“24’s” Jack Bauer may have seemed like great Dad material – a fearless fighter who was never too busy to plant explosives inside a terrorist’s car, or to take on a whole Al-Qaida training camp armed only with his spare AK-47 and some duct tape. But with this kind of schedule, it was nearly impossible to pin Jack down for parent-teacher conferences. No wonder his daughter ended up in therapy. Or maybe it was the kidnapping by one of the terrorists?

Even media dads who really love their kids were problematic. Homer Simpson did all kinds of goofy things for his kids. He even let himself get impaled by sharp metal objects while pretending to be a robot so his son could win a robot war competition. If only he wouldn’t scratch himself like that in public. Ray Barone (Everyone Loves Raymond) means well, but like so many men on TV, his incompetence and lame jokes compelled his obviously smarter wife to perpetually stand with her hands on her hips looking exasperated. No wonder that guy didn’t have a job.

Reports from Hollywood promise a fall line-up of new shows featuring more committed, sensitive dads. (Man Up!, Up All Night, Last Man Standing) But while these men steer clear of the Mafia or Al-Qaida training camps, most are wussified males prone to bursting into tears. One hires a buff, macho pal to retrain him in the art of masculinity, something he has washed away in the shower under an avalanche of pomegranate body wash. Men on these shows often have time for this since their (smarter, more competent) wives are the ones out in the work force. If Hollywood were remaking “24” for next season, they’d have to write in a scene where Jack (who remarries and has more kids) texts his wife a note that he’s off to Afghanistan for a little while to take down a would-be assassin. None too happy, the wife texts back, “You can’t, Jack. You have carpool!”

Dads have been getting a raw deal on the pages of bedtime stories for kids for years.

It’s no better in kiddie lit, either. Dads have been getting a raw deal on the pages of bedtime stories for kids for years, and my friend Rich has just about had enough. “I don’t get it,” Rich told me while slaving over a full sink of dirty dishes. “Dads like me have been trained to be equal partners in raising our kids. We vacuum, wash dishes, and have to be sensitive at the same time. That’s a lot to ask of a guy, especially when his wife buys him ‘light’ beer. So how come after all this sacrifice, the only kids’ books I can find showing families either don’t have dads at all, or have dysfunctional dads? Even the daddy gorilla in one book I found has a drinking problem and is always sleeping it off in the tree house.” Rich got excited when he discovered one  book about an intact family of hippos, but it turned out the daddy was a pachydermal Ray Barone. Not surprisingly, the mom was not only wise, but able to multitask as if she had opposable thumbs.

If Rich doesn’t find some books with good Dad male role models soon, he will have to write his own, which he admits may cut significantly into vacuuming time. It’s a sacrifice he’s willing to make. “Someone has to take a stand for manly, mencshy dads!” Rich avowed, while basting a pot roast for dinner and conjuring up possible story lines.

I know Rich still has lots of company. Most of the dads I know (including my husband) are  hard-working menches who know that real men love to build sand castles with their kids, carry them around on their shoulders while singing silly songs, and coach Little League. They can even think up their own sage advice to share with their kids, without cue cards from Mom, and they don’t require pomegranate body wash, either. These men deserve better TV shows, better books to read their kids, and better Father’s Day cards, too. I mean, what is it with those ducks?

So happy Father’s Day to all you wonderful dads, true heroes in our time. And I hope your wives give you the day off from vacuuming.

7 Things An American Pickle Gets Right about Judaism
The Promise Of The Land
Which Chat Are You On?: Parshas Behar/Lag Ba’Omer
Do You Like Slow-Cooked Food? Thank the Jews
Comments