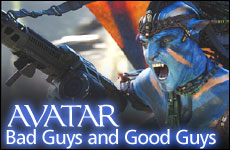 Whose side are you on now?

Avatar hero Jake Sully’s decision to become a Na’vi is not the only switching of sides that takes place during the course of the three-hour movie. The audience also transfers their loyalties from the values that define Western civilization to a radically different set of values.

The three villains of Avatar are:

At least since the Enlightenment, these have been the cardinal values of Western society: materialism, physical might, and scientific progress.

But materialism also refers to the philosophy that physical matter is the only reality and that everything can be explained in terms of natural phenomena. This philosophy derides those who believe in the existence of spiritual forces as “superstitious” at best, “crack-pots” at worst.

A society that values military power devotes much of its resources to the development of armaments and chooses as its leaders ex-generals (E.g. Eisenhower, DeGaule, Rabin). It equates power on the national level with military strength, on the personal level with muscles. Such a society glorifies the “super-hero” who has a weight-lifter’s physique and can beat up his opponent. It might snicker at the Jewish definition of a “hero": “A hero is one who overcomes himself” (Ethics of the Fathers 4:1).

The audience finds itself rooting for the Na’vi, a people who values spiritual forces, tradition, and virtue.

A society that values scientific and academic knowledge defines “progress” as technological advancement and honors Doctors of Philosophy, Medicine, and Law. It demands no equivalence between academic excellence and ethical behavior. This attitude is exemplified by Bertrand Russell’s famous repartee, when censured for his sexual escapades while Professor of Ethics at Harvard: “When I was Professor of Geometry, you didn’t ask me why I’m not a triangle.” A unique exception to this bifurcation of knowledge and virtue occurred in March, 2008, when Yeshiva University granted nonagenarian Clara Hammer, who supplies chicken to hundreds of poor families every week, an Honorary Doctorate in Kindness. In Western society intellectual brilliance usually trumps virtue as a standard of excellence.

Then comes Avatar! And the audience finds itself rooting for the Na’vi, a people who values spiritual forces, tradition, and virtue. Col. Quaritch calls them “savages” as he goes in for the kill.

Watching the movie, I had déjà-vu. When the Enlightenment flashed into the Jewish world beginning in the late 18th century, it divided the Jews into the same two warring camps as Avatar portrays. The proponents of Enlightenment were university-educated, usually more affluent, and progressive. They lambasted traditional Jews, who clung to Torah observance and who refused to adopt the lifestyle of the secular world, as “backward” and “primitive.”

The lines that have divided the Jewish People for the last couple centuries are similar to the lines that divide the Earth People from the Na’vi: progress vs. tradition, materialism (in the sense of believing that matter is the only reality) vs. spirituality, and scientific knowledge vs. wisdom. Significantly, (spoiler alert!) toward the end of the movie Dr. Grace Augustine severs her alliance with Selfridge and Col. Quaritch and sides with the Na’vi, just as science in recent decades has been moving toward a rapprochement with religion.

The proponents of Enlightenment attacked traditional Judaism as furiously as Col. Quaritch went after the Na’vi.

The proponents of Enlightenment attacked traditional Judaism as furiously as Col. Quaritch went after the Na’vi. They published books and pamphlets accusing the “shetl Jews” as causing anti-Semitism by their obdurate refusal to dress, speak, and act like their Christian neighbors. They denounced leading rabbis to government authorities for the crime of “resisting progressive legislation,” and scoffed when the rabbis were thrown into prison. They mocked traditional Jews as antiquated, old-fashioned, and superstitious.

Such scorn for traditional Jews reached its nadir during the early years of the State of Israel. About one million Jews lived in Moslem countries up until 1949. They had inhabited those countries for centuries, some for millennia. These Sephardi Jews had amassed wealth, were highly literate in rabbinic writings, boasted great Talmudic scholars, and tenaciously preserved the traditions of their ancestors, despite the intermittent persecution of their Moslem hosts.

When these Sephardi Jews were expelled from their homes and prohibited by the Moslem governments from taking their wealth with them, they arrived in the fledgling State of Israel as the embodiment of what the West despised. They were poor, religious, and ignorant of Western culture. The Ashkenazi establishment in Israel regarded these Jews as “primitive” and “unenlightened” because they were not conversant in Shakespeare and Mozart. Ben Gurion, in his book The Individual and His Destiny, compared the Sephardi communities to “dust—without a language, without education, without roots. Turning this dust into a cultured nation is not an easy task.”

I personally did not have to go to Pandora to undergo a transformation similar to Jake Sully’s. I was about 14 years old when I first encountered Hasidic Jews. I thought they were from a different planet. My father, a professor of English literature, once had to pick up a book in a Hasidic section of Brooklyn. He took me along. I gawked at the men in long, black coats and the women wearing headscarves, and heard them speaking Yiddish. My father, an open-minded man usually tolerant of all sorts of anthropological anomalies, dismissed these strange Jews with a single word: “Backward.”

Like Jake Sully discovering the Na’vi from the inside, my prejudices melted away in the warmth of that loving Hasidic family.

Two decades later I began to investigate my Jewish roots. My spiritual journey at one point led me back to Brooklyn, where I was invited for a Shabbos meal in a Hasidic home. Like Jake Sully discovering the Na’vi from the inside, my preconceptions and prejudices melted away in the warmth of that loving Hasidic family. To them, “progress” meant spiritual progress, power was measured by self-discipline, and wisdom was more valued than wealth. Truthfully, in their midst, I felt like the primitive one.

Watching Avatar, many of us heirs of the Enlightenment, sitting in movie theaters throughout the West, underwent a similar transformation. We found ourselves rooting for the Na’vi, a people who believed in the power of prayer and clung to their ancestral traditions. Perhaps it’s time to reevaluate our own preconceived notions of observant Jews and traditional Judaism?

Evelyn Gilbert is a copy editor who resides in the West Coast of the United States.

The Matrix Resurrected: A Philosophical Examination
Blessing on Chewing Gum
Was Rahab a Prostitute?
Extras In Our Own Epic
Comments
MOST POPULAR IN Jewlarious
Our privacy policy