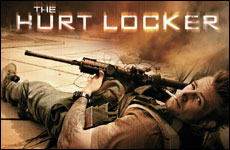 Do we have to risk our lives to feel alive?

Have you ever gone skydiving? Bungee jumping? White water rafting? Anything else that makes our mothers cringe? I have -- all of the above. And I’m not the only one. Extreme and adventure sports are big business. Ever wonder why? After watching the Oscar winner for best picture, The Hurt Locker, I may have figured it out.

Kathryn Bigelow’s film opens in post invasion Iraq in about 2004 and follows a U.S. Army Explosive Ordnance Disposal (EOD) unit -- a bomb squad. In the opening, gripping sequence, Sergeant Thompson is killed while trying to defuse an improvised explosive device (IED) in Baghdad. Thompson is then replaced by Sergeant William James, a macho, reckless and ingenious technician. Our hero.

Sergeant William James is a macho, reckless and ingenious technician. Our hero.

But his heroic antics strike fear into the men assigned to accompany him on his missions -- Sergeant J.T. Sanborn and Specialist Owen Eldridge. They think James’ recklessness is going to get them killed. And they are almost right. James has the three of them search for the perpetrators of a massive car bomb alone at night in the back alleyways of an Iraqi village. Specialist Eldridge is kidnapped by insurgents and almost hauled away for good until James finds them and shoots the insurgents, injuring Eldridge in the process. Eldridge is airlifted to a hospital in Germany for surgery on his broken leg, all the while blaming James for the ill fated mission. Sanborn has also completed his deployment and heads home, disillusioned. James is not far behind.

James returns home to his wife and child. We see him in a grocery store attempting to perform menial tasks, like selecting the right breakfast cereal. He is clearly lost. Lifeless.

One night, while spending time with his baby boy he admits to his son that everyone has to find what they truly love, and for him there’s only “one thing.” Next, we see James back in Iraq, serving for another year as an explosives technician in a new EOD unit.

Hurt Locker won the Academy Awards for best picture and best director for a reason. It’s a great film -- gripping, gritty and honest. But it’s also an interesting insight into the psyche of some of the people who work in professions where their lives are constantly on the line. Some are addicted to the adrenaline. They don’t feel truly alive unless they’re grappling with the threat of death. War may be hell, but what a hell it is.

The desire that drives Sergeant James is what pushes some of us to jump out of planes at 10,000 feet with only a parachute strapped to our backs. For some reason we don’t feel alive “enough” and want to confront death to give us a renewed sense of appreciation for life.

Do we have to risk our lives to feel alive? Is there no other way? And I wonder if this is a modern phenomenon. Did people in the Middle Ages jump off the roofs of castles to get a rush? I’m betting they didn’t.

I’m no expert, but if I think a lot of this has to do with knowing what you are willing to die for. If you're plugged into meaning in your day-to-day life, striving to accomplish important things that carry consequences, with a mission to fulfill -- I doubt you're going to risk all that for some life endangering sport. Knowing what you're willing to die for puts the focus on what really matters in life. And as Rabbi Noah Weinberg, of blessed memory, often said, don't just die for it – live for it!

Now, I’m not saying that everyone who goes skydiving has something wrong with him (heck, I did it!), but I do think that today there is less belief and conviction in ultimate values and causes worth dying for, and that leads to a void that must be filled with something, anything – including shocking the system with near death experiences.

Better to fill that emptiness by connecting to things that are really worth dying for.

In the meantime, if you find yourself in need of a little adrenaline rush, you can watch The Hurt Locker without risking your life. It’s quite a ride.

Adele's New Song Gives Us Access to Her Heart
The 21st President of the United States: Failure or Inspiration?
Hiding Their Jewishness
The Jewish Pope: Following the Questions Home
Comments