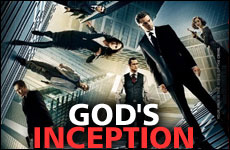 The Oscars, Judaism and the power of dreams.

The film "Inception," up for eight Academy award nominations including Best Picture and Original Screenplay, sounds very much like the stuff of science fiction. The hero, played by Leonardo DiCaprio, has the seemingly impossible task of "inception," planting ideas into someone's subconscious while sleeping. The dream of the target is controlled by an outside force. And that is something, at least in the movie, that is fraught with frightful consequences.

I couldn't help thinking that hidden within this fantasy is a truth about dreams that Judaism recognized thousands of years ago – a truth that ought to make us rethink the meaning of something we do about one third of our lifetime.

After all, isn't it strange that human kind so desperately needs sleep on a regular basis? We believe that God created us to live lives of purpose, to fulfill divinely appointed responsibilities, to accomplish significant tasks. So why did He make it necessary for us to take time out in such consistent way with an activity that seems to allow us to accomplish nothing? Surely He could have made our bodies function without these eight out of 24 hour intervals of total idleness.

The wisdom of Kabbalah gives us a profound answer: We sleep because God, so to speak, cannot bear to be away from us too long without closer contact.

When we sleep our souls ascend heavenward. Only a residue remains to keep our bodies alive. The rest returns to its source to be reinvigorated and refreshed with spiritual nourishment. We who are created in the image of God need more than the food we ingest for our bodies during the day in order to survive. The out of body experience we call sleep is a trip we have to make on a daily basis to keep our sanity, so that our souls do not perish of starvation from being deprived of heavenly sustenance.

Sleep, the Talmud tells us, is 1/60 of death. The similarity is based on the physical separation of the soul from the body. In death it no longer returns. In life, the soul comes back from its meeting with the divine to hopefully tackle the challenges of daily living with the insights and inspiration gained from its journey.

When we awake, the first thing we do is to thank God for returning our souls to us. We are now ready to face the harsh realities of life from a higher plane of understanding.

And how is divine instruction given to us during the time our souls are freed from their earthly constraints? This is where Hollywood's newly minted word "inception" may prove helpful. The idea of inception, that someone may actually be able to implant thoughts into another's subconscious, may just seem like far out science fiction if viewed as a result of human initiative. But inception is perhaps a wonderful way to describe what God does for us every night as we lie sleeping, overwhelmed by the harshness and cruelty of the real world and desperate for a vision of a better, kinder and more spiritual existence.

God teaches us by way of a gift that we call dreams. Dreams, as someone beautifully put it, are illustrations from the book your soul is writing about you. Freud is not the first to have attached importance to dreams and to recognize within them important subconscious messages. The Talmud long-ago preceded him. Just as the rabbis wrote that sleep is a 60th of death, so too they added that “Dreams are 1/60th of prophecy” (Talmud, Brachot 57b).

Maimonides was profoundly intrigued by the comparison:

"As you are aware, our Rabbis state that a dream is 1/60th of prophecy; and you know, that it is inappropriate to make comparisons between two unrelated concepts or things...and yet they repeated this idea in Midrash Bereishit Rabbah (Genesis 17:7 ) and said, 'the buds of prophecy are dreams.' This is indeed a wonderful metaphor, for just as a bud is the actual fruit itself that has not yet developed fully, similarly, the power of the imagination at the time of sleep is exactly that which operates at the time of prophecy, in an incomplete and unperfected state." (Guide to the Perplexed 2:36)

Granted not all dreams, the rabbis agreed, contain prophecies like those of Jacob, Pharaoh and Joseph in the Bible. Yet, every dream means something. “A dream not interpreted is like a letter unread” (Talmud, Brachot, 55a). If not prophetic, their subconscious messages carry at least a kernel of truth. They may be divine goalposts meant to guide us to fulfill our greatest potentials. They serve, as Marsha Norman put it, like stars: “You may never touch them but if you follow them they will lead you to your destiny.” And the nightmares? They alert us to our spiritual failures and the need for personal improvement.

Dreams are the keepsakes of our nightly rendezvous with Heaven.

The reason we dream is because our souls have been on a trip, and our dreams capture the photos they want to show us of their journey. They are the keepsakes of our nightly rendezvous with Heaven.

The Talmud tells us that after the destruction of the first Temple prophecy came to a halt. We no longer have the kinds of revelations recorded in the Bible. But because the world could not survive without some measure of divine communication, God decreed that "Although I will hide my face from them, I will speak to them in a dream (Talmud, Chagigah 5b).

That's why dreams are “Godly inceptions.” They are messages from above that have entered our subconscious in the hope that they will be turned into conscious action.

And some truly great people have the ability to dream even when they are awake.

Dreams make the impossible seem not only possible but inevitable.

Dreams make the unattainable not only within reach but readily accessible.

That's why “inception” is far more than science fiction. It's nothing less than the way God continues to grant us His wisdom, His inspiration, and His guidance to ensure that we dream dreams that are worthy of us – and that we become worthy of them.

The Boy in the Striped Pajamas
Blessing on Chewing Gum
Was Rahab a Prostitute?
Extras In Our Own Epic
Comments
MOST POPULAR IN Jewlarious
Our privacy policy