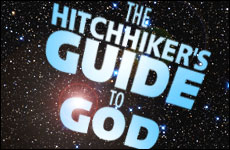 You need to find the right question for the answer to make sense.

For as much as there is wrong with Facebook -- endless status updates about minutiae of our friends' lives, for starters, not to mention potential consequences in our professional lives from ill-advised photos or comments -- one thing I love about the program is its ability to reconnect us with friends and family members whom we may have lost contact with for whatever reason.

Recently, Facebook allowed me to reconnect with a friend from high school, whom I hadn't seen in years. Unfortunately, she's been through a great deal of hardship in the last few years, including some that requires heavy medication. She told me that she sometimes feels like she ought to be dead.

She challenged me to tell her why she shouldn't be dead.

My reaction was instant and instinctive. I told her that she should never say or think such a thing. Her response was to tell me about some of the physical and emotional pain she'd suffered in recent years, and the physical pain she still suffers now. She challenged me to tell her why she shouldn't be dead.

Her descriptions of her life since we'd last seen each other were shocking, and I could tell that under the circumstances, words like "Things happen for a reason" or "God works in mysterious ways," would come off as little more than empty platitudes.

Instead, I wound up telling her about the day I discovered a kabbalistic connection in The Hitchhiker's Guide to the Galaxy.

I was blessed to spend my 27th birthday in Israel, having just gotten in under the age limit for one of Aish's Birthright trips. The main focus of our day was a trip to Tzfat. After touring some of the holiest and most important sites in the city, taking a break for lunch, and doing some shopping, our group visited the gallery of Avraham Lowenthal, who presented some of his mystical art.

Having grown up in a reform congregation, and currently being part of an unaffiliated one, I was unfamiliar with many of the concepts explored in Lowenthal's works, and as he described them, I was intrigued. What fascinated me most was his representation of Ana Bekoach, and explanation of the 42-letter Holy Name. Upon hearing for the first time that God has a name 42 letters long, a light bulb went off in my head.

I was in middle school when I read Douglas Adams' book, and was fuzzy on many of the details, but one main plot point had always stuck with me. A hyper-intelligent pan-dimensional race had built a giant supercomputer, called Deep Thought, to compute the Answer to the Ultimate Question of Life, the Universe and Everything. After seven and a half million years of computing time, Deep Thought gives the answer: 42. The pan-dimensional beings are stunned until Deep Thought explains that they need to find the actual Question of Life, the Universe and Everything in order for the answer to make any sense. Another computer is constructed to discover the question, that computer being the Earth...but we'll get to that later.

For years after reading the book, even as I forgot many other elements of the story, I would still answer any questions as to the "meaning of life" with a joking response of "42." To learn about the 42-letter Holy Name -- and that my longtime joke actually had a spiritual meaning -- simply blew my mind. And I now have Lowenthal's representation of Ana Bekoach hanging in my apartment.

Are we all like the fourth son who does not know how to ask?

Could it be, looking back to Passover, that we are all, in our own ways, like the fourth son who does not know how to ask?

I told my friend about going to Tzfat and making the connection to the Hitchhiker's Guide, and said that while I certainly didn't know what the right question was, her question of why she shouldn't be dead wasn't it. While I was discussing this with her, another thought popped into my head, another reason why she wouldn't be better off dead.

It was a quote from Jackie Robinson, now immortalized in the rotunda dedicated to him at the New York Mets' new stadium: "A life is not important, except for the impact it has on other lives."

As I shared the quote with my friend, saying with conviction that her life can still impact others, I realized that it made perfect sense for me to think about Robinson while discussing Kabbalah and the Hitchhiker's Guide.

Robinson's now-retired jersey number is, after all, 42.

Elliot Olshansky is a web editor and writer for the New York Daily News, and a regular contributor to US College Hockey Online. His work has also appeared in Street and Smith''s Sports Business Journal, Yale Alumni Magazine, and the Valley News (White River Junction, Vt.). A graduate of Dartmouth College, he resides in Westchester County, N.Y.

Wisdom of Spider-Man
Faith: the Axis Upon Which the Wheel of Science Turns
Love - Not Just About Chemicals Anymore!
Is There a Moral Code in a Virtual World?
Comments
MOST POPULAR IN Jewlarious
Our privacy policy