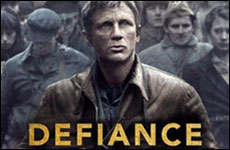 How the Bielski Partisans built a village amidst the Nazi death machine.

The Maccabee's revolt against the Greeks is probably the most famous example of Jewish rebellion, when a band of untrained scholars overcame the greatest empire in the world. In modern times, the Israeli army has revived the image of a Jewish fighting force.

Many of us however, still have a stereotyped image of the Holocaust, of millions of Jews marching like sheep to the slaughter, silently accepting their fate. In reality, most Jews lacked the proper information to rebel, and when at last they understood the gravity of their situation, it was usually too late. Beyond this was the inner strength that countless Jews expressed by maintaining their dignity and staying true to their faith even when death stared them in the eye – spiritual heroism on the highest order. The Nazis watched in disbelief as Jews marched to the gas chambers singing in joyous song, proud to die as Jews rather than sink to the twisted level of their murderers.

In the rare instances that Jews did know the reality of the situation ahead of time, however, they rebelled with a vengeance. One well-known act of defiance was the Warsaw Ghetto, where untrained, starving Jews repelled the powerful Nazi army for several weeks, using mostly homemade weapons. In the end, the last of the Warsaw Ghetto fighters either perished or ran for their lives as the Ghetto burned to the ground.

The Bielski brothers had inflicted more casualties on the enemy than the famous Warsaw Ghetto uprising.

This was not the only Jewish rebellion. During the war, rumors began to circulate of a band of Jews who roamed the forests, terrorizing the Nazi regime at every opportunity, looting villages and local farms -- while rescuing men, women, and children from the ghettos and bringing them to safety in the woods. These fighters were known as the "Bielski Partisans," named after the three charismatic brothers who led them. When they came to a town, the tables were turned, and suddenly the Jews were the ones looking down the butt end of the rifle.

By the end of the war, the Bielski brothers had inflicted more casualties on the enemy than the famous Warsaw Ghetto uprising -- over 380 German soldiers and Nazi collaborators fell at their hands. And they saved more Jews than Oskar Schindler -- some 1,230 souls.

This story remains relatively unknown until today. Their story is now being told on the silver screen in Edward Zwick's new blockbuster film, Defiance, featuring Daniel Craig as Tuvia Bielski.

Jerusalem in the Woods

On June 22, 1941, the Germans began their infamous Operation Barbarossa, the invasion of the Soviet Union. Within two months, most of eastern Poland and all of Belarus had fallen to the Nazi invaders -- an inferno that would eventually consume all the Jewish communities.

Tuvia, Zus, and Asael Bielski ran into hiding, after their parents and other siblings were killed in the Navahrudak ghetto at the beginning of the war. Before being killed, their father David commanded them to stay in the woods. "This war won't last forever," he said.

The Bielskis had been successful farmers and millers before the war. They were no strangers to the woods and they knew how to handle a gun. They followed their father's advice and fled to the woods surrounding their family's farm. Before long, refugees from the ghetto began to join them. Determined to stay alive despite all the death and destruction around them, a makeshift community formed and they started to construct underground bunkers for shelter.

Their forest village had a bakery, school, synagogue, theater and jail.

What began as an act of personal survival became a mission to save as many Jews as possible. And while they carried out acts of sabotage against their enemies, the saving of Jews took precedence. Tuvia Bielski, the eldest of the brothers, often declared that he would "rather save one old Jewish woman than kill 10 Nazis." This is in line with the Talmudic dictum, "He who saves a single life, is as if he saved an entire world."

The natural thing to do would have been to try to save themselves without worrying about anyone else. The Bielskis responded selflessly.

As more and more refugees joined the Bielskis, their forest dwelling eventually turned into an all-out village -- complete with a mill, bakery, bathhouse, medical units, tannery, school, synagogue, and even a theater and a jail. Amongst the members were many skilled workers such as tailors, shoemakers, carpenters and mechanics; they equipped the large community with everything they needed for survival and minimal comfort. A herd of 60 cows provided milk and 30 horses were used for transportation. Two ritual slaughterers supplied the community with kosher meat.

Among themselves, the partisans referred to their forest haven as "Jerusalem in the woods."

When the Soviet General Platon came to visit the village, he was amazed to see the tannery where over a dozen people worked preparing hides for shoes, the bakery ovens full of bread, the soap workshop, and the sausage factory. "Are you also making vodka here?" Platon asked incredulously.

The Nazis offered a reward of 100,000 Reich Marks for assistance in the capture of Tuvia Bielski, and in 1943 led major operations against partisans in the area. The Bielskis constantly led their group deeper and deeper into the forest to new locations. They were never truly safe and lived in constant fear -- not only of German soldiers, but also of local police and peasants who were happy to turn them in to the Nazis in exchange for some cash or foodstuffs.

Tuvia was a born leader, and he was successful at forming allegiances with the Russian partisans in the area, convincing them that he was fighting for Mother Russia. The Red Army provided them with weapons and supplies, as well as protection from the other various partisan groups in the area who were not particularly fond of Jews.

To ensure their safety, the Bielskis ruled their unit with great vigilance, demanding utter obedience from their members. Although his measures may have been extreme, he felt it necessary to respond harshly to disobedience in order to ensure the safety of the whole. In one instance, Zus had one of his officers executed for leaving a civilian Jew behind during a village raid. Saving Jews was a non-negotiable policy and it wasn't easy to promote such selfless behavior among his men at a time when self-preservation was the norm.

What would we do if we were in their shoes?

Dealing with Nazis and collaborators entailed powerful moral struggles. The Bielskis' ruthlessness was fully unleashed on anyone who turned Jews or partisans into the authorities. Tuvia had a former neighbor beheaded with an ax for collaborating with the Nazis. An informer and his family were shot to death in their home, which was then torched, leaving a sign threatening the same fate for anyone who attempted to follow in their footsteps. No mercy was shown to a group of captured German soldiers, with many willing would-be executioners eager to avenge the death of loved ones.

Although the Torah forbids the taking of vengeance, it does permit killing for self-defense, to stop someone who intends on killing you or someone else. For the Bielskis, it was clearly a matter of both self-defense mixed with vengeance.

The Nazi fires continued to rage until the summer of 1944, when Red soldiers marched through Belarus, reclaiming it for Mother Russia, spreading the news that Hitler's army had been defeated in the Soviet Union. Just hours after the last enemy lines had been broken and pushed out, an incredulous sight appeared on the outskirts of the village of Navahruda: emerging from the dark forest was a line of Jews nearly a mile long.

Instead of perishing at the hand of the Nazis in ghettos, cattle cars, and gas chambers, this troop of over 1,200 Jews had survived the war living in the woods, and now at the disbelief of the gentile onlookers, had returned to the smoldering ashes of their villages, to put the pieces of their broken lives back together.

Their survival was nothing short of a miracle and it was due entirely to the efforts of the three Bielski brothers.

After the war, the Bielski partisans were accused by the Polish government of war crimes against the neighboring villagers, primarily regarding alleged involvement in the massacre of 128 people in the Polish village of Naliboki, as well as numerous cases of armed robbery and looting. Members of the unit denied those charges, claiming they were not in the vicinity at the time.

They moved to Brooklyn and did blue collar jobs.

Toward the end of the war, Asael was drafted into the Red Army, where he fell in combat against the Germans at the battle of Konigsberg in 1945. Tuvia and Zus immigrated to Israel with their families where they fought in the 1948 War of Independence. Tuvia was offered a high-ranking position in the IDF, but he declined, tired of all the fighting. Convinced that the Arab-Israel conflict would never end, they moved to Brooklyn in the mid-1950s in search of a peaceful existence. There, they drove delivery trucks, pumped gas, and did other blue collar jobs, as well as raising large families.

Tuvia and Zus died anonymously, their story fading into oblivion, until it was discovered by Nechama Tec who publicized it in her 1993 book, Defiance: The Bielski Partisans.

The Bielski brothers responded in defense of the Jewish people, risking their own lives instead of taking the easy way out. Their souls were stirred by the spilling of innocent blood and they rose to the aid of their brethren against all odds. They are but another link in the eternal chain of Jewish struggle against darkness.

Dune, Judaism and Humanity's Hope
It Takes A Lot Of Faith To Be An Atheist
How Instagram Brought Back This Nostalgic Soup
What Makes Eli Run?
Comments
MOST POPULAR IN Holocaust Studies
Our privacy policy