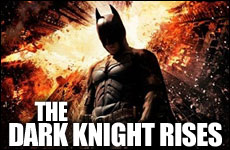 Unfortunately, tragedies happen. But we must rise again and find a way to grow.

There are a lot of reasons that Christopher Nolan’s third Batman movie is called The Dark Knight Rises, though most of them involve spoilers.

For example, at the beginning of the movie, Batman is forced to rise back up out of retirement. (If this spoils anything for anybody, one has to wonder what they expect from a Batman movie in the first place.) But yes, he was retired. These rich people, they can afford to retire early.

Batman has to rise up against the fear that has kept him in the shadows his entire life.

But he’d accomplished what he’d set out to do. Gotham is safe. He completed his life’s work, and is ready for old age. He grows a little beard, walks around with a cane (an actual cane. Also Michael Caine.) he has bad knees from years of jumping off rooftops, and he wants to trade in his batmobile for a rascal that goes 800 miles per hour. But when a new villain named Bane shows his face in Gotham (Well, part of his face. You know how it is in Gotham), he has to rise up and reluctantly put on the cowl again.

But first he has to shave that soul patch, or everyone will know it’s him.

As a villain, Bane is physically stronger than Batman. He was trained by the same guy who trained Batman, and he can’t be psychologically beaten either, because whatever Batman can dish out, Bane has had worse. Bane isn’t scared of Batman’s growl either, having some voice issues himself. He is basically an evil Batman.

So there’s a fight, and Evil Batman defeats “One More Case Before Retirement” Batman, even going as far as to break the latter’s back, and brings him to the prison in which Bane has spent most of his life – a literal hole in the ground that is nevertheless the best place to go to get your back fixed. If I ever hurt my back, I’m going to try to find that prison. They have a horrible dental plan, though. Bane definitely needs to find a new orthodontist.

So Batman has to heal, retrain himself, and try to be the second person ever to climb out of the hole at the top of the prison. But to do so, he has to rise up against the fear that has kept him in the shadows his entire life.

Yes, he already rose at the beginning of the movie. But it turns out he rose wrong. He put on the scowl, but he wasn’t Batman. Rising from the ashes doesn’t just mean getting dressed and getting out of the house. It turns out that he hadn’t just retired from being Batman, he’d given up on being Bruce Wayne as well. For eight years, he was holed up in his mansion, in a prison of his own mind, mourning the loss of his girlfriend, and not only never getting out of the house, but having sheets draped over the furniture in the house as well. So when he did take up the mantle again, he didn’t do so to win, because even if he won, what was there to get back to? So he goes up against Bane with none of his officially licensed toys, and gets his back handed to him.

Alfred didn’t want him back in the game. If the streets are safe, Alfred feels, you can rise up past the tragedy and get back to living your life. Just because you have no reason to be Batman anymore doesn’t mean you can’t be Bruce Wayne either.

“You only see one end to your journey,” he says. “Sometimes, a man rises from the darkness.”

Alfred desperately wants Bruce to run away with someone. Anyone, really.

“What about her?” he all but asks in his best Jewish mother voice. “She’s nice. Isn’t she your age?”

The Dark Knight Rises is actually a very unique movie, in that about halfway through, the bad guy wins. Most movies are about preventing the bad guy from enacting his plan, but in this movie, Bane goes through with it. He’s broken the Batman, captured the city, activated a nuke, and trapped the cops underground. The bad guy actually wins, and only halfway through the movie. Batman does achieve victory in the end, but only because the movie is 3 hours long. They had to take it into overtime for the good guy to win. But in other words, the movie is about winning AFTER the bad guy has won. The tragedy has occurred, you can’t prevent it anymore, and the question is what you do NEXT.

King Solomon said in Proverbs, “The righteous man falls seven times, but he gets back up.” Everyone falls, even the righteous. The question is whether you have what it takes to get back up. Do you let failure drag you down permanently? Do you curl up into a ball and wait until you die as well?

“Why do we fall?” Bruce’s father asks him rhetorically, in Batman Begins. “So we can get back up.” We might view falling as a tragedy, but the prospect of picking ourselves up is the entire reason we fall. Most of the time, we won’t pick ourselves up if we don’t fall first.

Nobody wants a tragedy, and no one wants hard times. But at the end of the day, the strongest people in the world are the ones who’ve overcome difficulties. Bane is stronger than Batman, because, as he says, “You adopted the darkness. I was forged in the darkness.” Bane is stronger because he’s had to climb farther. And unless Batman comes from the same hole in the ground, he’ll never beat Bane.” The bigger the weights that you use, the stronger you are in the end.

Who’s a better all-around person, you or Paris Hilton? I know the answer to that question, and I don’t even know you.

Look at the people who grow up rich and have everything in the world. Paris Hilton, for example. Who’s a better all-around person, you or her? I know the answer to that question, and I don’t even know you. But why is that true? She’s never wanted for anything a day in her life. She has everything. What do you have that she doesn’t have? And the answer is, NOT EVERYTHING.

You’ve had problems. You’ve had inconveniences, annoying situations, and even some really tough times. But how many traits that you like about yourself started as resolutions that you made because of those times?

If you squash a baseball mitt under a piece of furniture, it works better. If you heat up a piece of meat before you eat it, it definitely tastes better. It’s no picnic for the meat, but in the general scheme of things, it’s an improvement. You might be upset that you broke your arm, but for the rest of your life, you’re going to know how to make your bed with one hand.

Tragedies happen. Suffering happens. The Jewish people have experienced more suffering on a routine basis than any other nation – Holocausts, progroms, expulsions, and we even lost two temples. But we’re also the longest-lasting nation. Why is that?

On Tisha B’Av, we sit on the floor in mourning for all of those things. But then in the afternoon, we rise. It’s important to remember the tragedy from time to time, but we can’t wallow in it every day forever. We remember it, learn from it, and use it to motivate us to be better. Tish B’av is only one day per year. But what about the rest of the year?

Rising up from a tragedy doesn’t mean that we forget the tragedy or those we lost. It just means we don’t wallow in it. We rise, we stand back up, we find a way to grow from it, and through that growth, we carry the memory with us.

We’ve had two temples destroyed. Our backs were broken. But it’s not over yet. We’ve just gone into overtime.

Cobra Kai: The Sensei vs the Rabbi
Blessing on Chewing Gum
Was Rahab a Prostitute?
Extras In Our Own Epic
Comments
MOST POPULAR IN Jewlarious
Our privacy policy