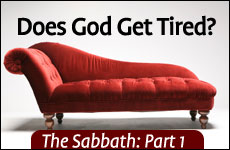 Why would an All-Powerful God need to rest?

First article in a three-part series on the concept of the Sabbath.

Let’s try the following theological zinger on for size:

“Why, exactly, would God feel it necessary to rest after creating the universe? Was He tired?”

The question isn’t as facetious as it sounds. Judaism, like many other major religions, conceives of the Almighty an All-Powerful being. That, indeed, is why they call Him “the Almighty”. So if God is really All-Powerful, how difficult would it have been for him to create a Universe? Presumably, this didn’t require a lot of exertion on His behalf. Well, then, why did He need to rest afterwards?

Well, that’s one conundrum. And now, here’s another:

Most of us seem to assume that Sabbath observance is tied to our acknowledgement that God created the world; that is, “we rest, because the Creator rested”. But there is something odd about this when you get right down to thinking about it. Why do we commemorate God's Creation of the Universe through a day of "rest"? Why not instead set aside a day of "work"?

In case this question doesn’t strike you as all that troubling, let’s bring it out of the realm of abstract theology for a minute and couch the problem in more mundane terms.

Imagine that the government decided to institute a special Rosa Parks Day on the calendar. Its intent: To commemorate the civil rights triumph of the black woman who refused to give up her seat to a white man on a segregated bus in Montgomery, Alabama. And imagine that officials were looking for some sort of symbolic activity they could promote on this day to honor the memory of Rosa Parks' great act. Eventually, they came up with the following: Everyone should go home on Rosa Parks Day, and take a nap in bed. Why? Because, you see, after Rosa Parks took her historic ride on the bus, she was tired, and she went home to rest in bed. So let's all commemorate Rosa Parks Day by resting in bed, just as she did.

Shouldn’t we instead remember creation by "creating," rather than "resting"?

I don't think many people would consider this a spectacular idea. If you really wanted to commemorate Rosa Parks, then we should re-enact her historic trip. People could spend part of the day riding on buses, or finding ways to fight racial prejudice in their home towns, just like Rosa did. But taking a nap? Somehow, that just doesn't seem to add up.

Yet on the Sabbath, isn't that really what the Torah is asking of us? We commemorate the Almighty's historic act of creating the world -- and we do so by resting. We do this, we say, because the Almighty rested when He finished making the universe. But shouldn’t we instead remember creation by "creating," rather than "resting"? The point isn’t that God rested – it’s that He made the world, right? Isn't “rest” just incidental?

Back to the Text

Well, let’s look at the verses and check it out. In Genesis chapter 2, the Torah chronicles the coming into being of the very first Sabbath. Listen carefully to these verses and ask yourself: Exactly what is the Sabbath designed to commemorate?

These verses tell us the reason the Almighty deemed the Seventh Day special: Because on this day He rested... Now, think about what those words are actually saying. As strange as it may seem, the verse is telling us that the point of the Sabbath Day is not, actually, to celebrate God's creation of the universe. It is to celebrate His rest.

One second. That sounds downright silly. How could anyone think that God’s Rest is more important than His work – than the very act of creating the world? It sounds roughly like saying that the purpose of work is vacation. Vacation might be nice; it helps you gear up and refresh yourself to accomplish more things when you get back to work. But is vacation really what it’s all about?

Evidently, the verses are telling us we need to re-assess our ideas about work and rest. God's rest, apparently, had very little in common with the idea of "vacation." It was not something that merely happened after God created the world; it was not that God took some time off for a breather. The Creator's rest was a deliberate act. It was a kind of rest that was, somehow, an end in and of itself:

You made the Seventh Day Holy for Your Name, it being the very purpose of the Making of Heaven and Earth...

These words come from the backbone of the Friday night prayers Jews recite every week, from the Friday night shemoneh esrei. Listen to what they are saying. Shabbat, "rest," is portrayed as the very purpose of creation, the end for which the entire heavens and earth were created.

What does it mean to see rest in this way -- not as something you do to help you work, but something which is the very point of all your labor? Why would God consider His "rest" more worthy of commemoration than His successful creation of a universe?

Tied up in the secret of rest's deeper meaning is the mystery of Shabbat itself. It is a mystery we will explore further next week.

Click here to order Rabbi Fohrman’s book The Beast that Crouches at the Door: Adam and Eve, Cain and Abel, and Beyond.