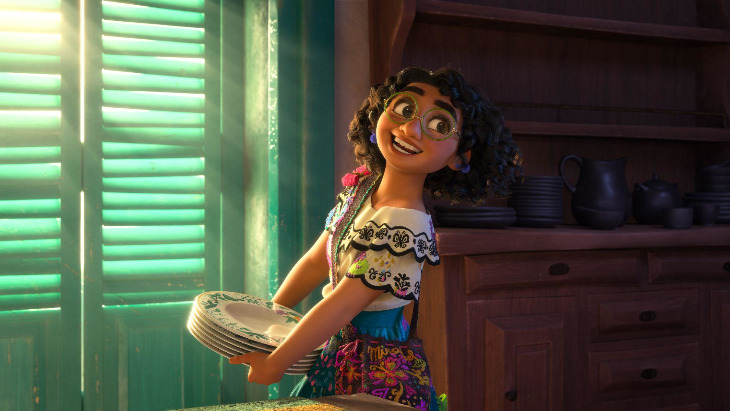 What if the Madrigal family were descended from Sephardic Jews?

Unless you have been living under a rock for the past six months, you have probably heard of Disney’s wildly popular 2021 movie, Encanto, which tells the story of the magical Madrigal family who live in a secluded village in the mountains of Colombia. If you happen to be the parent of a young child, you have likely watched Encanto more times than you can count, and its hit song “We Don’t Talk About Bruno” plays on an endless loop inside your head.

Encanto has met with widespread praise for its many irresistible songs (by none other than Lin-Manual Miranda), beautiful animation, heart-warming plot, and faithful and exhaustively researched depiction of Colombian culture. The first Disney movie with an entirely Latinx cast, Encanto “does a painfully beautiful job portraying the intergenerational Latinx family experience,” writes Pamela Avila in USA Today.

In the film, the family’s matriarch, Abuela Alma, was forced to flee her home in the face of violence and build a new life for her children after tragedy. Relying on magical powers to make themselves indispensable to their neighbors, the Madrigals become pillars of their community. Subsequent generations feel intense pressure to live up to Abuela’s often unrealistic expectations. And get this: the source of the Madrigals’ magic is a candle that has miraculously burned for decades. Based on these elements, some have found Encanto not only reflects the experience of Latin families, but those of Jewish families as well. 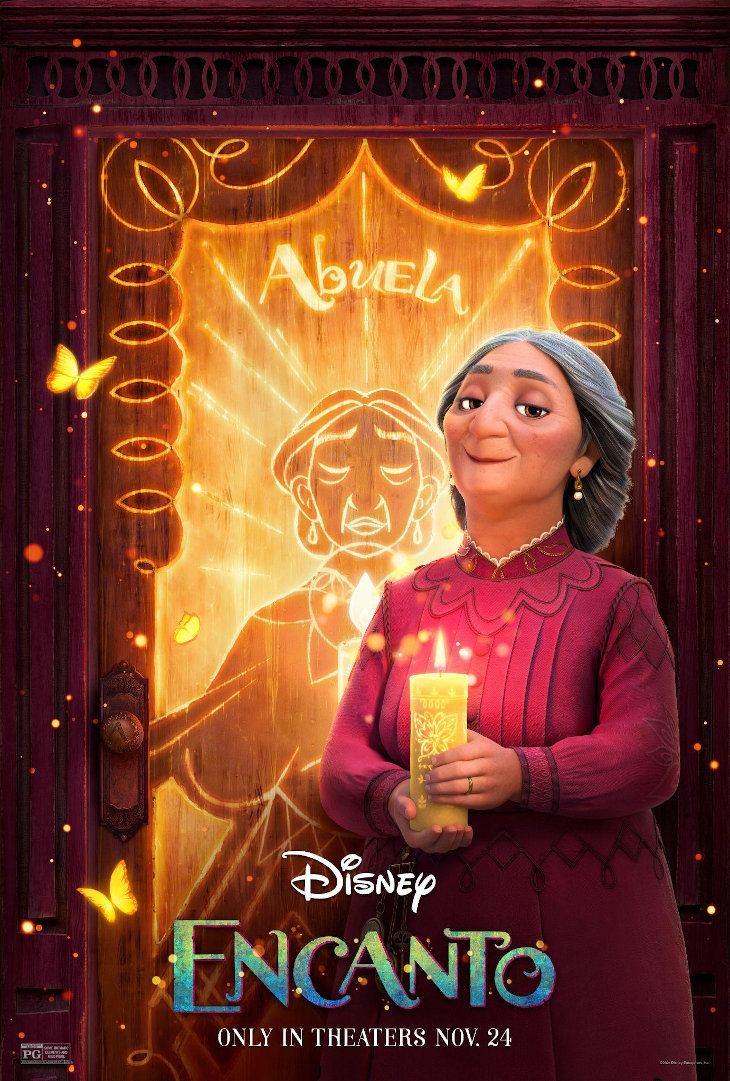 Fleeing violence, having to make a life in a new place, and the weight of multigenerational trauma are familiar to many Jewish families - particularly those descended from Holocaust survivors. Writing for Kveller, Lior Zaltzman points out that “while it’s not specifically about the Holocaust, ‘Encanto’ is, without a doubt, a movie about generational trauma and the way pain percolates down through generations — and so many of its dynamics are deeply familiar and haunting to someone whose relatives survived a genocide.”

Viola Levy in The Jewish Chronicle also makes the connection between the Madrigals’ experience and those of many Jewish families:

“Many of [Encanto’s] themes will hit home for those of us raised in a culturally close-knit family, whether Colombian or Jewish….[S]uch families have many universal components and ‘Encanto’ tackles them all. The estranged relative no one talks about. The eldest daughter expected to carry the weight of the family (*raises hand*). The younger generations expected to over-achieve to compensate for everything their grandparents went through.

And, of course, candles that burn long beyond their expected life are at the heart of the Chanukah story.

Some have even gone as far as to speculate that the family at the heart of Encanto might be descended from Sephardic Jews based on their last name, Madrigal, which is associated with Jews from Spain and Portugal. This is purely speculation, of course, but studies have shown that as many as a quarter of those living in Latin America may be descended from conversos, or Sephardic Jews that were forced to convert to Catholicism in the wake of the Spanish Inquisition. Many conversos emigrated to the New World to escape the persecution that persisted on the Iberian peninsula. Indeed, approximately 26,000 Colombians have applied for Spanish citizenship claiming that they are descended from Sephardic Jews who were forcibly expelled from Spain during the Inquisition.

The existence of these significant Jewish themes in Encanto led me to wonder about the history of Jews in Colombia. What if the Madrigal family were, in fact, descended from Sephardic Jews? Would that have been in keeping with historical fact? How many Jews live in Colombia today? And most importantly, what do they eat?

As it turns out, there have been Jews in what is now Colombia for centuries. The first Jews in Colombia were, in fact, conversos, who, despite having nominally converted to Catholicism, continued to follow their original faith in secret in the New World. Tragically, many members of this community were exposed as Jews and killed in 1636 when the Inquisition traveled to the Spanish colonies. At the end of the 18th century, more Jews arrived in Colombia from Jamaica and Curaçao - which were controlled by England and Holland respectively at the time - where Jews were permitted to live and worship. These newly arrived Jews began openly practicing their faith even though it was forbidden to do so at the time.

When Colombia gained its independence from Spain in the early 19th century, it finally became legal to practice Judaism. Since that time, there have been multiple waves of Jews emigrating to this South American nation. There was a wave of Sephardic Jews from Turkey, Greece, Syria and North Africa who fled to Colombia in the aftermath of WWI. And as the persecution of Ashkenazi Jews in Europe increased in the 1920’s and 1930’s, some fled to countries in Latin America, including Colombia, which were more open to Jewish immigrants than the United States. Indeed, in the 1930’s, some 7,000 German Jews fled to Colombia, and the Jewish population continued to grow throughout the 1950’s and 1960’s.

However, Colombia experienced economic instability, violence and crime in the later decades of the 20th century, causing many of the Jews there to leave for other Latin American nations, Israel, and the United States, especially Miami. Today, approximately 5,000 Jews remain in Colombia - mostly concentrated in the capital of Bogotá as well as other cities like Barranquilla, which is home to Colombia’s oldest Jewish congregation. But the small community is growing once again: as Colombia’s fortunes have improved, some Jews have returned and the community there has even welcomed Jews fleeing neighboring Venezuela.

Like many Jewish diaspora communities, the Jews of Colombia developed their own unique cuisine combining the traditional foods they brought with them from their countries of origin - both Ashkenazi and Sephardic - with the ingredients and flavors they encountered in their new home. Jewish families in Colombia also created their own versions of local dishes that would normally contain pork, such as pasteles, a dish similar to a tamale consisting of cornmeal stuffed with various fillings and wrapped in a banana leaf. While a Colombian family might stuff their pasteles with pork, Jewish families in Colombia use chicken.

Tel Aviv-based writer Merav Levkowitz’s mother grew up in Colombia as part of the Jewish community and her nonagenarian grandparents still live there. According to Levkowitz, when her mother was growing up in Colombia, her grandmother cooked both traditional Ashkenazi food, like gefilte fish and matzo balls, and Colombian staples like arepas. Her grandmother would also incorporate Colombian ingredients into Jewish dishes, such as making mandelbrot with guava paste and sweetening a traditional cholent with a dash of panela, which is a type of unrefined cane sugar beloved in Colombia.

Levkowitz’s family once owned a factory that manufactured the cornmeal used to make arepas, a cornmeal cake that is among the most iconic Colombian foods. Naturally, arepas make an appearance in Encanto as well: at one point, the main character Mirabel’s mother, Julieta, who can magically heal people with her food - which sounds pretty Jewish, come to think of it - heals a cut on Mirabel’s hand with an arepa con queso. Levkowitz explains that the Jews in Colombia enthusiastically embraced this local favorite: “Arepas are a very common Passover food even among Ashkenazi Jews in Colombia,” explain Levkowitz.

Jewish chef Deborah Benaim was born in Venezuela, right next door to Colombia, where arepas are also a staple food and she agrees that arepas are popular for Passover among South American Jews. Like Levkowitz, Chef Benaim describes her family’s cooking as a flavorful and unique combination of traditional Jewish cuisine with Latin ingredients. “For Shabbat we might have adafina which is like chamin or cholent. On the same table you might see a salad with tropical produce like avocados, hearts of palm, or plantain,” writes Benaim in an email.

For almost 100 years, Colombian Jewish cooks, like Merav Levkowitz’s grandmother, combined the Ashkenazi pastries that they knew from Europe - such as mandelbrot and hamantaschen - with the new ingredients they found in Colombia.

One of my favorite Ashkenazi baked goods is babka – and making babka with New World flavors has become trendy as of late. So I decided to create a babka recipe with fillings inspired by this tradition of adaptation incorporating flavors and ingredients of Colombian cuisine. The first filling combines guava paste and sweetened cream cheese for a tropical take on the classic Ashkenazi yeasted loaf. The second filling uses dulce de leche, the milk-based caramel found throughout Latin America - known as arequipe in Colombia - and shredded coconut. I argue that these babka fillings are as good as chocolate - if not better! Perhaps even Abuela Alma would approve. 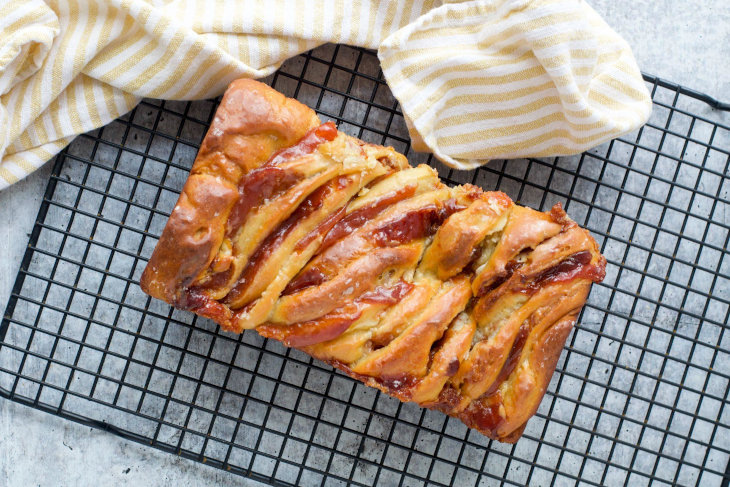 Get my recipe for Colombian-Inspired Babka with Cream Cheese and Guava Paste or Dulce de Leche and Coconut Filling. 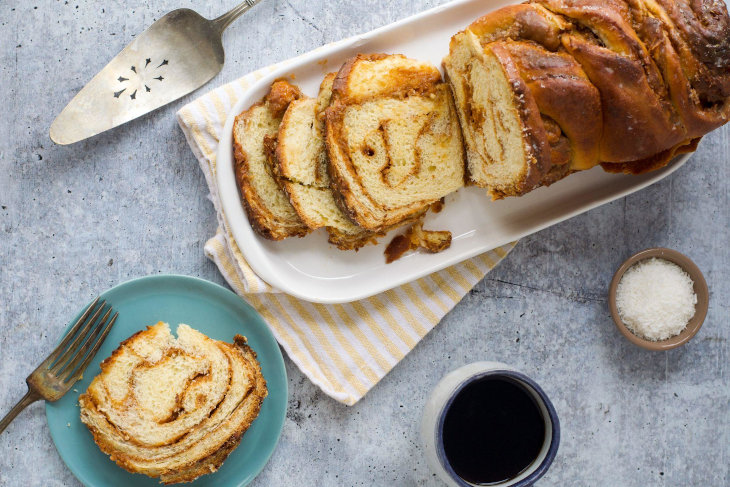 A lawyer turned food writer, Emily Paster brings passion, a sharp intellect and attention to detail to her globally-inspired, Jewish cuisine. She is the author of four cookbooks, including the best-selling Epic Air Fryer Cookbook. Her latest book is Instantly Mediterranean: Vibrant Satisfying Recipes for Your Instant Pot, Electric Pressure Cooker & Air Fryer, which came out in September 2021. Emily lives outside Chicago with her husband and two ravenous teenagers. Find more of Emily’s recipes on her blog West of the Loop.

One Drink Too Many: My Journey of Breaking Free from Alcohol
The Scandalous History of the Aleppo Codex
Who was Two-Gun Cohen?
Comments
MOST POPULAR IN Food
Our privacy policy