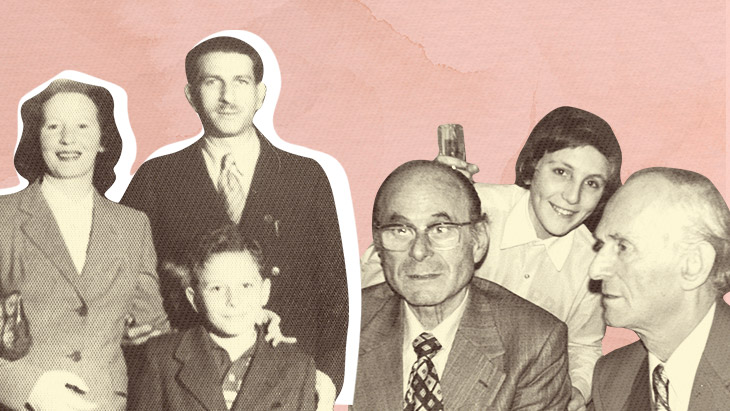 Wladimir Riszko hid 16 Jews for two years during the Holocaust.

For years, Sara Bank Wolf searched for information about her family. “I grew up completely surrounded by Holocaust survivors,” she explained in a recent Aish.com interview, speaking from her home in Israel.

The families of Sara’s mother and father were decimated during the Holocaust. Sara’s father, Dov Feingold, along with his parents Chaim and Sara, had spent two harrowing years when he was a little boy hiding underground in his native town of Przemysl in Poland, evading the Nazis.

Although Sara heard some of this tragic family history growing up in America, there was much she didn’t know. As a teenager, she formally interviewed her grandparents about their wartime experiences, but much of what her grandparents went through remained unsaid. Sara’s grandfather Chaim did mention that he, her grandmother and her father were saved by a Ukrainian man living in Przemysl who hid them along with 13 other Jews for two years, but Sara never knew the name of this brave rescuer. 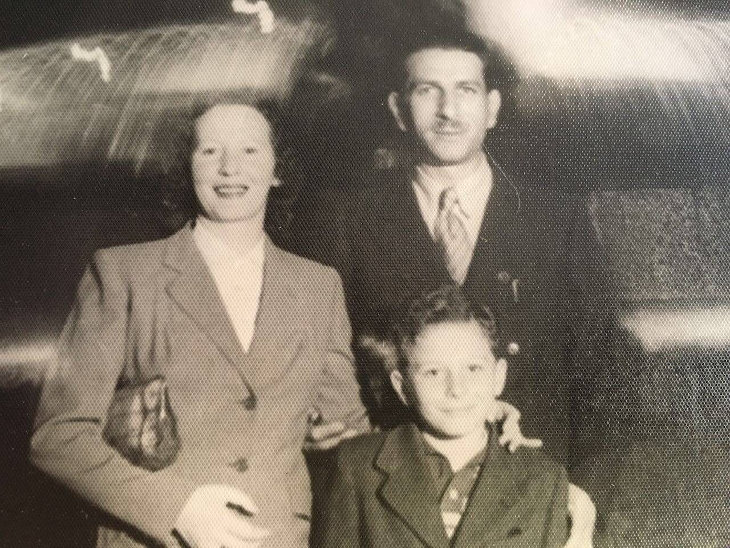 Sara’s grandmother died before she was born; she’s named after her. Her early demise was related to the two long years she spent hiding under the house of the mysterious benefactor: during that time, she developed strep throat which went untreated and probably developed into rheumatic fever, permanently damaging her heart. After her grandfather died, it seemed she’d never be able to find out the name of the man who’d hidden her family. Sara’s father Dov was only a young child during the Holocaust and couldn’t remember many details of his family’s hiding place, nor the other Jews they hid with.

Remembering the Past in London

Meanwhile, in London, Julie Hart Russell another daughter of Holocaust survivors, also had questions about her family’s wartime experiences – including her uncle Meyer Dornbusch.

“Growing up a second-generation Holocaust survivor, none of this was discussed in our family,” Julie explained in an Aish.com interview. “It was just buried.” Her mother had survived the notorious Krakow Ghetto and many other relatives perished or had their own harrowing stories of survival. “I knew that my grandfather was one of ten and I knew that some died in the war,” she explained. Much of her family history went unspoken.

Julie has fond memories of her Uncle Meyer, who lived in Paris. Meyer Dornbusch – also known as Marcel – was a “strong, charismatic man,” Julie recalls. “He was larger than life; he had a very good sense of humor.” When she was younger, Julie spent a year studying in Paris and recalls visiting him with fondness – though now she wishes she’d asked him how he survived the war. “Now I would sit him down and ask questions.” 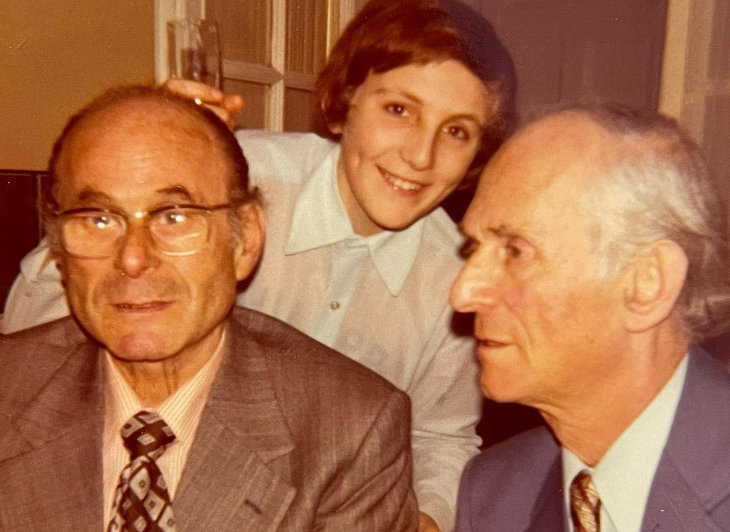 Meyer Dornbusch (in glasses), with his brother Oscar and nephew Phillippe

Unbeknownst to Julie, her Uncle Meyer was also one of the Jews hidden in that underground site in Przemysl. He, along with his niece Regina Dornbusch, were two of the Jews rescued by the mysterious Polish man.

Last January 18, 2021, a late-night phone call changed Sara’s life. Sara was taking a course on teaching about the Holocaust and her online class ended at 10 PM Israel time. Tired and trying to unwind, she phoned up her mother and asked questions about their family’s wartime history. “I asked her what she knew about when my grandfather was in hiding.”

Reminiscing over the past, Sara’s mother now recalled a detail that she’d heard years before. She seemed to remember hearing that the Polish man who’d saved the Jews married one of the Jewish women he saved and later on moved to New Zealand. Hearing this new detail of her family history, Sara suddenly was full of energy, ready to investigate this detail from the past.

She wrote to a Holocaust museum in New Zealand, telling them the basic details of her search: she was looking for a Gentile man who hid sixteen Jews in the town of Przemysl during the Holocaust and moved to New Zealand. Did they have any information? Sara didn’t expect to find much, and soon received a short, polite response saying there didn’t seem much to go on and the museum was unable to help.

Sara didn’t realize it at the time, but her email to the museum in New Zealand had also been seen by Dr. Ann Beaglehole, a celebrated Hungarian-born New Zealand writer who has researched the experiences of immigrants in New Zealand. Dr. Beaglehole saw a copy of her email and recognized the details in the story. She had once interviewed the children of an immigrant to New Zealand and she believed the man who saved and sheltered the 16 Jews during the Holocaust might have been their father.

Apparently Dr. Beaglehole passed along Sara’s email to them because the next day, Sara woke up in Israel to a new letter in her email inbox. “I'm crying!” the short email declared. At first Sara was puzzled, but after more emails back and forth, she realized she’d found the children of the man who’d saved her father.

George Riszko, the son of this incredibly brave hero, had written to her, crying while he typed. He knew the story of his father’s heroism. It seemed incredible that after so many years he and the daughter of one the Jews his father hid were finally able to connect.

After World War II, Wladimir married Rennie, one of the Jewish women he’d saved. They moved to New Zealand where Wladimir worked as a dockworker. Their daughter Eva Woodbury lives in Wellington, and soon she and Sara connected on the phone too. Eva cried, she later recalled: “I felt the release of having my father honored at long last.”

Eva explained that her mother, Rennie Riszko, was “really traumatized” for much of her life, particularly after Wladimir died in 1978. Rennie passed away in 2011. While her parents were alive, they told Eva all about the other 15 Jews her father saved. In fact, Eva told Sara, she had a list of all sixteen Jews her father hid.

Sara immediately started researching the names that Eva shared with her. Some included last names; others were only first names which she has so far been unable to trace. Using genealogical websites and aided by a cousin who’s interested in genealogy, Sara soon had identified several of the people who hid together with her father and grandparents. “We were like a detective agency.”

“Miraculously we have just learned the name of the righteous gentile, Wladimir Riszko who saved the lives of my father and his parents, Chaim Feingold, Salya (Sara) Feingold (nee Sperling) and my dad Dov. Altogether he hid 16 Jews for 2 years, including Rivka Schildkraut,” Sara wrote in her January 24, 2021 post.

“Mayer Dornbusch and his niece Regina, someone who went by the name of Juper/Chuper and the following individuals for whom we have no last name: Sam, Max, their sister, her husband, daughter and her brother in law. Sam’s girlfriend Frania, her sister Ruzia and Sam’s nephew, Juzek. Please contact me.”

Within days, several descendants of some of these Jews – in places as far flung as London, Paris, Israel and Chicago – were finally able to speak to each other over Zoom.

Soon after, Sara identified a descendent of the daughter of Regina Dornbusch living in Chicago. Sara phoned Regina's daughter, “I found your cousins,” some of whom had been hidden by Wladimir Riszko too. They had an emotional conversation – followed by another Zoom call, even though by then it was the middle of the night in Israel. “My mom was in the supermarket,” Sara recalls; “she left her cart to go join the call. We had an unbelievable reunion for close to two hours.”

Now that they know their families’ histories, some of the descendants of the Jews that Wladimir Riszko hid are reaching out to Yad Vashem to ask them to investigate and declare him a Righteous Gentile.

Julie Hart Russell notes that her daughter Emma is taking an active role in this. After the emotional excitement of recent weeks, Emma has a new goal: “The aim is to get him listed as Righteous Among the Nations.”

My Mother's Trauma of the Kindertransport
Live Abortion Panel
Morality and Abortion: Three Views
There Are No Limits
Comments