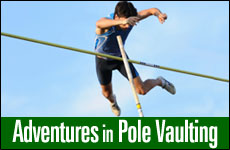 The winning mindset for athletes – and for life.

You're standing at the back of a runway. In your hands is a 14-foot long fiber glass pole. A slight breeze kicks up, making the pole sway to the left and right. You ignore the distraction and focus on the landing mats at the end of the runway, and a bar you have to clear set at 15 feet.

You've never jumped a bar this high and it is your last of three given attempts to clear. The entire track team surrounds the runway, clapping for you. Whether the team wins or loses depends on if you clear the bar. Adrenaline starts to surge through your veins.

You push away your fears, doubts, and insecurities and begin to run. Within a few seconds you reach the area where the mats are, now running at top speed. Skillfully, you lower the pole and all the energy of your run goes into bending it. Years of training and timing kick in.

The jump is going fantastic but the outcome is uncertain.

As the pole is unbending you manipulate your body to swing into a vertical position. It feels wonderful, the jump is going fantastic. You position your body perfectly and feel the pole fling you as it unbends, releasing its energy. You soar upwards and feel your body beginning to clear the 15-foot high bar. The crowd is roaring. The outcome is uncertain. 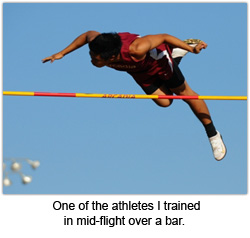 Many times in my coaching career I found myself in a situation just like this with one of my athletes. In life, just as in the pole vault, we find ourselves in situations where we have to put our absolute best effort into an endeavor, whether it's investing in the stock market, taking an exam, or raising children. We can put in the work, but the result is still uncertain.

In today's society success is most often measured by the result. Paradoxically, the actual result or outcome is completely out of our hands once the effort has been put in. Some days a person barely touches the bar and it falls down, while other days the athlete hits it like a train, and yet it still miraculously stays up.

You feel your body hovering over the bar, the crowd is roaring. Your legs and torso have already cleared the bar. Joy surges through your body. Unexpectedly, your chest ever so slightly brushes the bar. You land on the pit, staring up at the bar. It rolls to the edge of the pegs that were holding it up and teeters there for what feels like an eternity. The crowd holds its breath...

If the athlete feels that he's in control of the outcome, he feels like an utter failure. He thinks that if he had only done this or that better he could have achieved the outcome he wanted. In truth he knows that there is nothing more he could have done, but the bar falling off was completely unsatisfactory. He fails to give himself any credit for having one of the best jumps of his life. All he sees is the failure.

This is how many people live their lives and it is a sure path to misery. The person will live a roller coaster life, feeling elated and big-headed when things go his way, and despondent when they don't. Athletes that couldn't break this mindset would often quit, searching for less painful pursuits, not able to handle the lows.

Comparably, in the working world when a person puts in long hours, experiences financial success, and is able to afford a nice car and house, he will feel fantastic. But the day he puts in the same effort and loses a lot of money, all he'll be able to focus on is the negative number in his bank account.

If the athlete felt that God was ultimately in control of all outcomes, he knows there is nothing more he could have done. Yes he is frustrated that he was so close to clearing the bar, but he knows in his heart that there was nothing more he could have done. He knows that some days God wills that the bar stays on and others that it will fall off. All he can do is put in his best effort, and trust in God that it is all for the best.

Real success is measured by the level of work we put in.

Living with this mindset engenders consistent joy. Real success is measured by the level of work we put in. Eventually the bar will stay on, and on those days we'll be able to truly thank God for the gift.

More than anything else I emphasized this mindset to my athletes. I knew that if they could master it in the pole vault, they could apply it to other aspects of their life.

In my last season coaching we had many meets where we walked away victorious. I was optimistic and excited heading into my very last meet, hoping to end my coaching career on a positive note. God had other plans. On paper the meet was a disaster, my athletes as a whole underperformed due to variables outside of our control.

Early in my coaching career I would have been devastated with the season ending on such a sour note. I would have spent countless sleepless nights re-evaluating and re-examining every decision I made, trying to see where I went wrong. Instead, I was inspired to see my athletes disappointed but not despairing. We knew we had given it our best effort, whether the bar stayed up or not.

Joshua Shapiro is currently a student at Aish Hatorah Jerusalem. He received his B.A. in History from UCLA, and is working on his Masters in History from California State University: Northridge. Before coming to Jerusalem he had worked as a Track and Field coach for six years in Southern California. He also competed for five years in high school and college Track and Field as a Pole Vaulter. When he isn't studying Judaism in Jerusalem or History in California he enjoys rock climbing and writing.

When The Ship Comes In