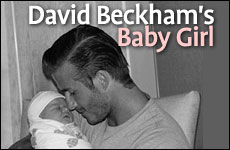 The Beckhams gave birth to their fourth child. Are they bad role models?

David and Victoria Beckham were overjoyed by the birth last week of their fourth child, a baby girl they named Harper. "We all feel so blessed and the boys love their baby sister so much!!!" the former Spice Girl exulted to her vast following on Twitter. A few days later she posted a picture of her husband cradling his new daughter, with the tender comment: "Daddy's little girl!"

What heart wouldn't be warmed by the Beckhams' delight in their newborn?

In a remarkably churlish article on Sunday, Britain's influential left-leaning newspaper (The Observer is The Guardian's sister Sunday paper) pronounced Harper's parents "environmentally irresponsible" for choosing to bring her into the world. Headlined "Beckhams a 'bad example' for families," the piece was a sour blast at parents who raise good-sized families. "One or two children are fine but three or four are just being selfish," Simon Ross, executive director of the Optimum Population Trust, told reporter Tracy McVeigh. "The Beckhams... are very bad role models with their large famil[y]."

McVeigh also quoted natural-history broadcaster David Attenborough, who recently "made a passionate speech about how the world's baby-making was damaging the planet." Fifty years ago there were 3 billion human beings, Attenborough had lamented. "Now there are almost 7 billion... and every one of them needing space. There cannot be more people on this Earth than can be fed."

Has there ever been a more persistent and popular superstition than the idea that having more kids is a bad thing, or that "overpopulation" causes hunger, misery, and hopelessness? In the 18th century, Thomas Malthus warned that human population growth must inevitably outstrip the food supply; to prevent mass starvation, he suggested, "we should sedulously encourage the other forms of destruction," such as encouraging the spread of disease among the poor. In the 20th century, Paul Ehrlich wrote bestsellers with titles like The Population Bomb, in which he described the surging number of people in the world as a "cancer" that would have to be excised through "many apparently brutal and heartless decisions." (His list included sterilization, abortion, and steep tax rates on families with children.)

Just last month, Thomas Friedman avowed in his New York Times column that "The Earth Is Full," and that "we are currently growing at a rate that is using up the Earth's resources far faster than they can be sustainably replenished."

Human beings, on the whole and over time, usually create more than they destroy.

For more than 200 years the population alarmists have been predicting the worst, and for more than 200 years their predictions have failed to come true. As the number of men, women, and children in the world has skyrocketed -- from fewer than 1 billion when Malthus lived to nearly 7 billion today -- so has the average person's standard of living. Poverty, disease, and hunger have not been eradicated, of course, and there are many people in dire need of help. But by and large human beings are living longer, healthier, cleaner, richer, better-educated, more productive, and more comfortable lives than ever before.

The Malthusians are wrong. When human beings proliferate, the result isn't less of everything to go around. The planet doesn't run out of food and fuel, minerals and metals. On the contrary, most resources have grown cheaper and more abundant over the past couple centuries -- in tandem with rising population.

The explanation is no mystery. Yes, more babies mean more mouths and therefore more consumption. But more babies also mean more minds and arms and spines -- and therefore more new ideas, more energy, more ingenuity, more initiative, more enterprise. "Human beings do not just consume, they also produce," writes George Mason University economist Bryan Caplan in a new book. "The world economy is not like a party where everyone splits a birthday cake; it is more like a potluck where everyone brings a dish."

It is a beautiful and uplifting insight, but the population misanthropes never seem to grasp it: Human beings, on the whole and over time, usually create more than they destroy. With more people tend to come more progress and more prosperity. That's why the birth of virtually any baby is cause to rejoice, and why parents who decide to raise another child bestow a gift on all of us. To be fruitful and multiply, says Genesis, is to be blessed. The parents of Harper Beckham know that, even if The Observer doesn't.