Chumash Themes #18: Sin of the Spies 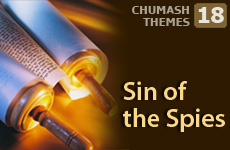 In Israel, the only option is to turn our eyes to the sky. 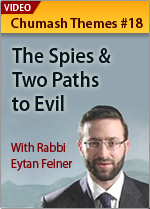 The saga of the spies is a key turning point in the Jewish journey from Egypt to Israel. The ramifications, in fact, extend to all of Jewish history. Let us start by summarizing what took place.

When the Jewish people left Egypt, their goal was to return to the land of the patriarchs, Israel. This journey began with receiving the Torah at Mount Sinai, followed by a year of acclimating to the responsibilities of mitzvah observance, and inaugurating the Tabernacle. At the conclusion of that year, the nation began to travel toward Israel.

The Book of Numbers begins with a census of the Jewish soldiers, and the formation of the tribes as they advance toward Israel. After three weeks of travel, on the 29th day of the Jewish month of Sivan, the people request to send spies to scout out the approaches to the land and its population.1 God and Moses agree, and 12 spies are sent, each one a leader of his tribe. They spend 40 days reconnoitering the area, and return bearing giant fruits.

Ten of the 12 spies spend the night of their return, the ninth of Av, telling horrible tales of the difficulty of the land and the strength of the native inhabitants. Joshua and Caleb, the two who do not join this cabal, attempt to convince the people that they can overcome the enemy and conquer the land which is bountiful and prosperous. They are overridden by the others, and the terrified people demand that Moses make a u-turn and return everyone to Egypt.

At this juncture, God tells Moses that this is the last straw; He wishes to wipe out the Jewish people and start all over again. Moses reaches back to what he learned about God’s attribute of mercy after the Golden Calf, and is once again able to forestall the wrath of God. However, there is a consequence. The people are told that they will not enter the land, and that they will wander for 40 years in the desert until the older generation dies out. Only the youth who were not involved in this rebellion will enter the land.

At this point, the people realize their mistake, and some try desperately to advance with force toward Israel. Moses warns them this will not succeed. Sadly, he is correct and they are beaten back by the Canaanites. Defeated, they return to the camp, resigned to a 40-year trek through the desert, until the next generation matures and will be able to conquer the land.

On the surface, this seems to be a simple failure on the part of a weak and terrified nation. However, from a closer examination, a greater understanding will emerge.

The Land of Israel

Let’s first try to understand what the Land of Israel represents, and why the Jews have always exerted such tremendous effort in settling this country.

From the moment we first meet Abraham, he is told, "Go forth to the land which I will show you."2 All three forefathers established roots in Israel. The subsequent sojourn in Egypt is called “exile,” with the goal of return to Israel. Of the Torah’s 613 commandments, almost a third are dependent on dwelling in the land.

We could ask: Why does the Torah – essentially a spiritual road map – anchor itself in a specific piece of real estate?

For the land which you come to possess, is not like the land of Egypt that you left, where you plant your seed and water it with your foot like a vegetable garden. But the land which you go over to possess it, is a land of hills and valleys, and drinks water as the rain of heaven comes down; a land which God cares for. The eyes of God are always upon it, from the beginning of the year until the end of the year.

The Torah articulates the unique aspect of Israel: All other lands are based around rivers and lakes which provide irrigation, seemingly independent of any heavenly intervention. Egypt is renowned for its system of canals and waterworks, and no matter how much rain falls in a given year, the farms will flourish.

Israel is different. Israel has two seasons: rainy and hot. Few water sources remain running during the summer. The water from the rainy season is stored up, and the only water for the year is what comes from the sky. In the absence of rain, we are left with only one option: to turn our eyes to the sky.

An Egyptian never needs to lift his eyes heavenward; he is busy “watering with his feet.” In ancient Egypt, the serfs spent endless hours on a bicycle-like contraption, pedaling furiously to lift the water from the Nile into the irrigation system. The Egyptian is completely focused on what is below him, and nothing draws him to the sky.

The agriculture of Israel, by contrast, directs us upward.

Mistake of the Spies

If that is so, then a question arises. When the Jews were in the desert, they were completely dependent on their connection to God – with manna falling from the sky and a miraculous well providing water. If the goal is to constantly lift one's eyes, then why bother entering Israel? Let’s just remain in the desert! What is the purpose of leaving an existence completely tied to God, and reentering the “natural world” where one's connection to God may be jeopardized?

Further, let us examine the motivation of the spies. It is just over a year since the Jewish people left Egypt. They had seen the Egyptians overwhelmed by Ten Plagues, and then drowned in the splitting of the sea. If that was not enough, the Jews had also received the Ten Commandments directly from God. They were living in the desert in a miraculous way, with all their needs taken care of.

Given all this, if God tells them that they are going to a land of milk and honey, and they will conquer it, why ask any questions? It would seem to be a no-brainer to just go with Moses and enter the land. Why do the people even need to send spies?

One answer can explain both questions. The existence of the Jewish people in the desert was an aberration, not only physically but even spiritually. The ideal concept of man is to live in the physical world, while striving to act as a spiritual being. God has an infinite amount of angels; what He desires are a few good people who can manage in this world and remain connected with Him. The time in the desert, with all the unusual miracles, was designed to train the people in their connection to God. But this supernatural arrangement was not meant to be permanent.

The Land of Israel was the true goal. That is why so many of the Torah’s commands relate to the mundane aspects of agriculture and animals. We are to take these practices and infuse them with Godliness.

Enter the spies. Since they were entering a world of natural means, they thought that the way to overcome the Canaanites was to employ regular military stratagems. This starts with reconnaissance and spying.

While touring the land, the spies perceived an atmosphere that was not conducive to connection to God. The land was full of mundane issues like farming and conquest. Yet they were judging based on their supernatural experiences in the desert. In one sense they were correct: trying to live in a fully natural sphere could lead them away from God. But they did not realize the true goal. The land which looked un-Godly was exactly what God desired.

Therefore, the decree of not entering the land was not a punishment, but merely a consequence of their inability to see the other side of the land. The generation that sent the spies was unable to exist in this new space. They were so accustomed to their God-connection being direct and palpable, that anything else was considered irrelevant. Their perception of the land was a disconnection from God, rather than a land which ultimately lifts one in an effort to reach God.

That is why their children could merit to enter the land. As adults, they had not experienced the Exodus or heard the Ten Commandments directly from God. They could envision a connection with God that was not “openly supernatural.” They were a generation that could achieve what God wanted: to live in a land dependent on rainfall, where one would constantly strive for connection to God, through the means of a natural, national existence. 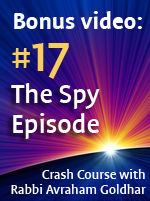 The incident of the spies took place on Tisha B'Av, the ninth day of the Jewish month of Av. God told the Jews: “Since on this Tisha B'Av you cried for nothing, in the future I'll give you something to really cry about.”3 This set an energy of national calamity into the day itself. Hundreds of years later, the destruction of the First Temple was to occur on Tisha B'Av. And 490 years after that, the Second Temple was destroyed on Tisha B'Av as well. From the time of the spies, Tisha B'Av has henceforth been known as the night of the weeping.

However, our tears of sadness are also our cause for hope. If we are still mourning today – some 2,000 years after the destroyed Temple – that is proof that the hope of its restoration still burns. And that is why, in a spiritual sense, the seed of Moshiach is born on Tisha B'Av.4 May we merit his coming, speedily in our days.

Chumash Themes #11: Splitting of the Sea