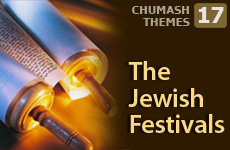 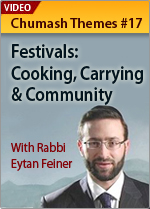 In this essay, we would like to go beyond the outer trappings of the festivals and try to see the foundations of Judaism as reflected in them. Let us briefly review the five festivals, their significance, and their associated commandments:

Some basic mitzvot are common to the festivals: There is a prohibition to “work”; certain activities involved in food preparation are permitted (except for Yom Kippur). In addition, in the time of the Temple, unique sacrifices were brought on each festival.

On a Torah level, Rosh Hashana, Yom Kippur, and Shavuot are one day each, while Passover and Sukkot have festive intermediate days – Chol HaMoed.

There are a few different patterns that emerge in the Jewish year. The most obvious is the set of three pilgrimage festivals: Passover, Shavuot and Sukkot; referred to as the Shalosh Regalim. The Torah (Exodus 34:23) tells us that on these days, all able-bodied people should appear in Jerusalem for a national celebration of service to God.

Rosh Hashana, the Jewish New Year, takes place on the first day of Tishrei. It is the commemoration of the day that Adam and Eve were brought to life. The Shofar is blown. The main thrust of the day is the coronation of the King, recognizing God’s mastery over the world. It is also the Day of Judgment for each person and all of humanity,1 so the prayers include supplications for all of our spiritual and physical needs. In addition, there is a custom to eat sweet things (e.g. apple and honey) to augur a sweet year.2

Yom Kippur, the Day of Atonement, takes place 10 days later. Jews around the world refrain from all physical pleasures, including eating and drinking. The day is filled with prayers of repentance and introspection to lead to self-improvement. We wear white garments to symbolize our angelic state.3 In the times of the Temple, this was the one time of the year that the High Priest would enter the Holy of Holies.4

Sukkot follows five days later. A Sukkah (temporary dwelling) is constructed, and the Four Species – lulav, etrog, myrtle and willow – are waved each day (except for Shabbat) in the synagogue, during the recitation of the Hallel prayers of praise. Traditionally, Sukkot is a time of great rejoicing, with parties each evening known as Simchat Beit Hasho’eva. The week ends with Shmini Atzeret (Eighth Day of Assembly) and Simchat Torah (Rejoicing with the Torah). The annual cycle of reading the Torah is completed amidst tremendous joy.

Passover commemorates the Exodus from Egypt. The day preceding the holiday, all bread and leavened products are removed from the home. On the first night, the Seder is celebrated, retelling the events of the Exodus. The matzah and marror (bitter herbs) are eaten, and four cups of wine are drunk. When the Temple stood, a lamb was sacrificed and eaten at this meal. The seventh day of Passover is a holiday commemorating the splitting of the Red Sea. On the second day of Passover, we begin counting the 49 days of the Omer.

Shavuot is the anniversary of receiving the Torah at Mount Sinai. There are no specific mitzvot of the day, however, there is a custom to stay up the entire night studying Torah.5

Let us now explore some general ideas relevant to the festivals:

The concept of the pilgrimage festivals, known as Aliyah LaRegel, is one of the crucial commandments in the Torah. When the Jewish nation was traveling in the desert, there was one encampment. Although each tribe had its own separate area, there was an inherent unity to the Jewish people. Once the transition was made to the Land of Israel, the nation was prone to separate factions. So God decreed that there be a central location, the Holy Temple, to serve as a focal point both geographically and spiritually.

To ensure the centrality of Jerusalem, God instituted a series of mitzvot: sacrifices could only be brought to the Temple, certain tithes could be eaten only in Jerusalem, and foremost the entire nation was to travel to Jerusalem three times a year. All of these served to unify the nation, rather than spin off into separate fiefdoms. In fact, when the Jewish nation did split after the time of Solomon, the first decree of the rebellious king Jeroboam was to ban the pilgrimage to Jerusalem, to prevent the nation from reuniting against his will.6 From here the nation begins to disintegrate, a harbinger of exile.

The mitzvah of traveling to Jerusalem three times a year – on Passover, Shavuot and Sukkot – is quite shocking when we consider its implications: While all the men are away, who's going to watch the land? Imagine what will happen when the Jewish enemies find out that all the borders have been left unprotected, since everyone is in Jerusalem. We are inviting an attack three times a year! So what’s the solution?

God declares: "…No one will be envious of your land [during the three festivals] when you go to be seen in God's presence" (Exodus 34:24).

The Torah's solution? Not radar, not mercenaries, not even a concrete barrier. Rather, “Don't worry, God will take care of it.” This amazing promise is another way we strengthen our belief that God wrote the Torah. For how could any human being promise something – in writing! – which requires powers totally beyond human control? And furthermore, why would anyone be willing to risk his credibility and the legitimacy of his religion with such a promise? Clearly, God is in control.

The festivals are annual commemorations of events in the past. But these are no mere arbitrary days, in the way that, for example in modern America, the last Monday in May is Memorial Day. A deeper understanding is revealed by what we say at the Passover Seder: “Every year a person must perceive as if he personally is leaving Egypt.” The Festivals carry the power of those original events, and each year we get to re-experience those events. When springtime comes, there is the energy of “renewal” in the world. This gives each of us the power to redeem ourselves from whatever conceptual slavery we might be in.

In this way, the Jewish year is not a circle, but rather a spiral. If each year on Shavuot, I personally re-accept the Torah, then each year I am building on what I accomplished the previous year. Just as the most basic building block of life – DNA – is in the shape of a spiral, so too we are not meant to revolve around the same point, but to go ever upwards. The festivals are a Jew’s opportunity for continuous growth.

Rosh Hashana and Yom Kippur do not require a pilgrimage to Jerusalem. In what way are these festivals different from the others?

As we say in the prayers on Rosh Hashana, all of humanity passes before God, and it is decided what will be each person’s lot. And on Yom Kippur, we request forgiveness from God for our shortcomings. Yet there seems to be a problem with the order of these holidays: Why not ask forgiveness before the Day of Judgment? Wouldn’t we want to enter judgment with a clean slate?!

The answer lies in our understanding of God’s judgment. We cannot truly ask for forgiveness unless we first acknowledge what we may have done wrong. Before we can perceive the depth of failure in service of God, we need to realize precisely what that service entails. Therefore, through the blowing of the Shofar on Rosh Hashana, we coronate God as the King of the world. Only then, when we have accepted God’s jurisdiction, can we be judged. And only then do we become fully aware of how we may not have lived up to our capabilities, and only then can we sincerely request forgiveness – and achieve atonement.

Since these festivals are directed toward personal growth, they do not require a pilgrimage. On the contrary, by viewing oneself as a part of the whole, it is easier to overlook one’s faults. When one needs to face their own soul, without any intermediaries, the image in the mirror is far more stark. Then one can more realistically repair what needs to be improved.

Then five days later on Sukkot, having done this difficult work of introspection, we can go to Jerusalem to experience the full national joy of Sukkot.

Thus the festivals serve as guide for a person through the year. We begin the spring with renewal and redemption. That sets the stage for a re-acceptance of the Torah on Shavuot. When the summer ends, on Rosh Hashana, we examine how we actualized our Torah observance. The ways we are lacking can be repaired on Yom Kippur. And then as winter comes, we can celebrate all we have accomplished with the joy of Sukkot.

Chumash Themes #11: Splitting of the Sea

Chumash Themes #1: Introduction to the Bible
Deep Breaths
What Happened to the Truth?
The Japanese Everything Bagel Spice Recipe
Comments
MOST POPULAR IN The Bible
Our privacy policy