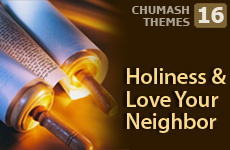 The entire nation gathers to hear about holiness. 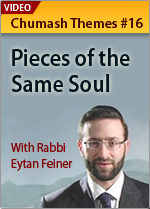 In Leviticus 19:2, Moses is commanded: "Speak to entire congregation of Israel, and command them to be Holy – since I, God, am also holy." This gathering was an unusual event, and prompts us to consider a number of questions:

The commentators offer three beautiful explanations why this "holy mitzvah" needed to be taught while the entire Jewish people were gathered together.

The Ramchal, in his classic work of Jewish ethics, Mesilat Yesharim,2 explains: Holiness is a very high level that we could not attain on our own. We begin to make an effort – and then God gives it to us as a gift. You can only go so far, and God does the rest.

Therefore, these mitzvot need to be taught to the entire community. As individuals, we don't deserve God's most elevated gifts. Rather, it is only through the power of Jewish unity that God will bring us to a point of true fulfillment. This is indicated in the prelude to the Ten Commandments, "And you shall be for me a kingdom of priests and a holy nation" (Exodus 19:6).

The two classical Torah commentators, Rashi and Ramban (Nachmanides), offer a difference of opinion on what it means to be holy.

Rashi says that in order to be holy you have to stay away from forbidden actions. That is achieved not just by refraining from those actions, but also by constructing fences to not stray too close to spiritual dangers. A person who respects these "fences" is on the path to holiness. And, if the boundaries are broken, that is the opposite of holiness.

One example is the idea of Yichud, the Jewish prohibition against being secluded in a private area with certain members of the opposite gender. How many times have we heard of one spouse, for example, who was working late on a project with a colleague (of the opposite sex) and gotten into a problematic situation that threatened to destroy their marriage? That's why the Sages instituted the laws of Yichud, as a fence against such episodes.3

Ramban disagrees and says that the key to holiness is to separate even from activities that are technically permitted! For example, while there is no Torah law against drinking wine, a person can go so overboard that he becomes what Ramban describes as a "scoundrel within the confines of Torah." Similarly, a person who eats only kosher food could still be disgusting in the eyes of the Torah if he eats like a glutton. The definition of holiness, says Ramban, is to maintain moderation even in things permitted.

Both of these approaches are obviously correct. On one hand, a person needs a healthy respect for what is forbidden: Just as you would erect a fence to keep away from a physical danger (e.g. an open pit), so too we respect the severity of Torah prohibitions by constructing fences. And in addition, we increase our sensitivity to God-like behavior by moderating our physical consumptions. In this way, all our actions carry a refined sense of holiness.

How much holiness should a person strive to attain?

Actually, the command to be holy is unquantifiable, and in a certain way this is more difficult than a clear-cut command. For after all, how is one to measure whether he is living up to the right “standard of holiness"?

The answer is as we said before: This commandment is given to the entire community. If your being holy enhances your connection to the community, then you are behaving correctly. But if it causes a separation between you and those around you, that is incorrect. Our actions, provided they are within the confines of Jewish law, should always be gauged by what will bring the biggest Kiddush Hashem, sanctification of God’s Holy Name.

This idea is illustrated by the Holy Ark which contained the Tablets of the Ten Commandments. This Ark was a square box made of wood, covered with pure gold from the inside and from the outside.4 But if the Ark is covered with gold both on the inside and the outside, then what need is there at all for the shell to be made out of wood?! Why not simply make the ark one solid piece of gold? The commentaries explain that case, the Ark will be too heavy for others to carry. And this teaches us that a person should not adhere to a standard of holiness that could have a negative effect on the community.

An extension of this is the idea that in performing any action – either mundane or a mitzvah – we should have the intention of doing it in a holy way. The purpose of this world is that it should cause us to cling to God, not for our own pleasure. Even when I am performing a mitzvah that includes physical pleasure, such as Shabbat or even marital relations, we are supposed to enjoy ourselves, but never lose sight of the fact that God is inextricably bound to this pleasure.

If a person designates his existence for a higher purpose, rather than focusing on himself, than even what he does do for himself is holy. In that way he can maximize the power of those physical pleasures.

There is another question that can be raised: Why is this command stated in the future tense, you command to be holy – kedoshim t'hiyu – rather than in the present tense like most other commands?

This teaches that this mitzvah has no limits. Every level you reach in holiness is just a stepping stone to the next higher level. We should never be complacent in thinking that we have reached perfection in the present. There is no limit to God's holiness, and as we are created in the image of God, we are meant to emulate that holiness.5

A person may, for example, keep kosher inside the home but eat in non-kosher restaurants. While keeping a kosher home is a big commitment, whose importance cannot be minimized, the question is: Does the person recognize that this is one stage that must lead to a greater commitment? Or does the person view this as a plateau, a stopping-point where, “I am comfortable just where I am and feel no need to grow further”?

This differing philosophy represents a key difference between Torah Judaism and other streams of Jewish thought. Are we constantly striving to fulfill all of the 613 mitzvot in their ideal way, or have we established a limit, a comfort level, beyond which we feel no need to reach beyond.

Notice that Leviticus chapter 19 contains many commands in the realm of interpersonal relationships – e.g. love your neighbor, don’t take revenge, etc. Holiness is not just between myself and God.

This is illustrated by the well-known Gemara6 about someone who wanted to convert and asked to learn the entire Torah while standing on one foot. In other words, he wanted to know the one central idea that represents the whole torah. The great sage Hillel answered him, "That which you dislike, don't do to your friend.” 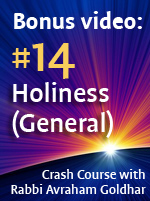 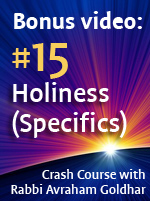 Another way of understanding why “be holy” is written in the future tense is that it is not just a command, but a promise and encouragement that despite the difficulties and ups and downs, we will be holy. There is an internal, eternal holiness of the Jewish people that remains, even if we don't always express it on the outside.

This explains the phenomena of people who seem to be completely disconnected from the Jewish nation, and suddenly finding their way home again. Soviet Jewry is a classic example. They were seemingly completely assimilated and unconnected, having been trapped behind an iron curtain for two generations – with no Jewish education or leadership. The wake of the Six Day War brought a spontaneous outbreak of Jewish identity and joy. This began the movement of the refuseniks, typified by Natan Sharansky, and ultimately the great immigration of Russian Jews to Israel and their reattachment to the Jewish people.

This is also the individual spark of Judaism, known as the “Pintele Yid,” which explains the popularity of the Baal Teshuva movement. Literally tens of thousands of assimilated Jews have made their way back to full Torah observance. There is no rational way to explain it.

As a resident of Jerusalem, I frequently visit the Western Wall, where I am constantly approached by people, asking deep and searching questions. They explain: “Somewhere deep inside, I feel connected here.”

At that gathering thousands of years ago, every Jewish soul was told: “You will be holy.” There is a spark of holiness in every Jews, and even if we do not see it, it is there, dormant, waiting to be kindled.

Chumash Themes #14: The Tabernacle
Blessing on Chewing Gum
Was Rahab a Prostitute?
Extras In Our Own Epic
Comments
MOST POPULAR IN The Bible
Our privacy policy