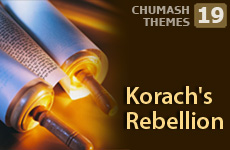 The secret behind the great rebellion against Moses. 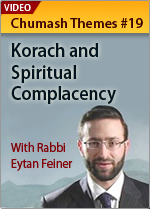 Korach is one of the leading Levites, but instead of enjoying his position, he prefers to ridicule Moses' leadership and attempts to set up an alternative leadership. He faces the nation and, challenging the monarchy of Moses, proclaims: "The entire nation is holy and why do you Moses lord over us?" (Numbers 16:3) This clarion call for "justice and equality" resonates with modern man. However, after a showdown at the Tabernacle at high noon – using incense burners rather than colt 45s – Korach's true egotistical motives are revealed to all. The rebellion fails and he and his followers are swallowed alive by the earth.

For a deeper understanding of these events, we need to explore:

After the sin of the Golden Calf, the privilege of serving in the Tabernacle was given to the only tribe that did not join its worship, the Levites. This tribe was divided into two groups:

Korach was a Levite, who had one of the most prestigious positions – carrying the Ark with the Ten Commandments. In addition, he was the third-eldest of the great-grandchildren of Levi, after Moses and Aaron2.

Further, the Talmud3 emphasizes Korach’s wealth: He required a caravan of 300 mules just to transport the keys to his treasure house! It was this great wealth that gave Korach a sense of power and entitlement – which then manifests in inappropriate ways. The challenge of wealth is to use it for the betterment of mankind, and to avoid using it as a prop for one’s ego. That was Korach’s fatal mistake.

This combination empowered him with enough sense of stature to rebel against Moses.

If Korach was so prominent, what was he lacking that caused him to rebel? The Talmud4 presents three causes:

1) When the administration of the Levites was established, Korach saw himself as the natural prince of the Levites, based on his ranking among Levi’s great-grandchildren. So when a younger branch of the family received the appointment, Korach seethed. He questioned Moses’s integrity, and accused him of nepotism.

2) To inaugurate the Levites into service, there was a process, which included the bringing of offerings, a complete removal of all hair, and immersion in a mikveh. And then, the culmination was that each Levite was actually lifted up by Aaron and waved to and fro. This represented their being spiritually lifted to new level.

When Korach returned home, his wife was waiting with sarcastic comments: “So, you were shaved bald, and then shaken not stirred?! You allowed yourself to be made a fool of by Moses and Aaron!” This set off Korach’s hatred of Moses and led him down the path of rebellion.

3) Since Korach was shaved as part of the inauguration process, he was unrecognizable. When he walked down the street, instead of being greeted with honor and deference, no one recognized him without his hair and beard. This blow to his ego caused him to plot revenge on Moses.

Moses had performed great deeds for the Jewish people. So how could he begin to undermine Moses' leadership?

Actually, the Jewish people had just suffered a series of setbacks. One group of Jews had been killed in a fire,5 another group had died in a plague,6 and the entire nation had been decreed to wander 40 years in the desert.7

Still, to attack Moses or God directly would be impossible. So Korach tried to create an artificial differentiation between God's commands, and what could be perceived as Moses' own interpretation. For example:

The Jewish people had recently been informed of the mitzvah of tzitzit – the requirement to tie fringes on the end of a four-cornered garment. The fringes are to be made of two types of threads, white and techeilet, a royal blue color.8 Korach made garments completely of techeilet and did not attach tzitzit. He then dressed a group of his friends in these garments and brought them before Moses.

Korach then launched into a major attack on Moses: “You claim to be speaking in the name of God, but it is obvious that your logic is faulty and God could not be the author of these laws. And just as you are being illogical in these situations, so too your choices for leadership positions are not Godly, but your own personal desires.” Korach then turned to the people and, claiming to represent the 'little guy', rejects the leadership of Moses.9

Moses is quiet and does not respond. He realizes that there is no good defense against ridicule and sarcasm. People are predisposed to believe the worst of their leaders, and even more so when they cannot see the logic of their actions. In Moses’s case, it was the system of halacha that was under attack. This is the approach that Moses was taught on Sinai, and its unique framework cannot always be perceived on the surface as logical.

So Moses tries to stem the rebellion – not by logical arguments, but through humility. He personally goes to Korach and the other leaders of this rebellion and begs them to accept his leadership as coming from God. However, his efforts are perceived not as strength, but rather as weakness. Korach thinks that he has Moses on the ropes, and refuses to back down.

At this point Moses makes an unbelievable pronouncement. Notwithstanding his great humility, he proclaims that Korach and his rebellion face a choice. They can either recant, or they can accept Moses' leadership in all its aspects. If they choose not to accept, they will pay a stiff price. Moses specifies that the punishment will be a new creation, directly from God, and in response to Moses’s request.

Moses here is making the point perfectly clear: “You claim that I am acting on my own without God's direction. But I will demonstrate exactly how in tune God and I are. I will come up with a brand new punishment, and God will agree to my directions. If this works, then it is obvious that I am a true agent of God. My halachic decisions and personnel choices are also directly from God. If however, this does not happen, even if Korach is punished but not exactly as I directed, then that proves I am an impostor.”

When the earth opens and swallows Korach, all these doubts are laid to rest. The relationship between God and Moses is perfect and clear. Nothing that Moses does is without the direct connection to God. Thus ends Korach’s rebellion. 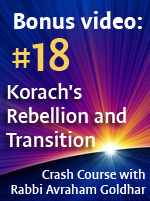 In our time, we do not have a Moses with such a direct line to God. Yet we do have humble people who attempt to understand the Godly directive and follow it.

And as for Korach, unfortunately we have many of those today. These are the ones who use sarcasm and ridicule to try to puncture the pure and altruistic motives of good people. They foster discontent. They clothe themselves in the guise of the populist who is worried about the little man. However, they are really out for themselves and their own ego.

Judaism regards quarrelling as one of the gravest sins. Why? Because divisiveness contradicts the essential unity of God and undermines the harmony of creation.10

It was hatred, jealousy and infighting which brought about the destruction of the Temple in Jerusalem.11 And only through unconditional love will it be rebuilt. The Torah states: "Don't be like Korach" (Numbers 17:5). This is a prohibition against quarreling.12 Know your place, and respect those who deserve it. This is the lesson of the rebellion of Korach.

Chumash Themes #14: The Tabernacle
Deep Breaths
What Happened to the Truth?
The Japanese Everything Bagel Spice Recipe
Comments
MOST POPULAR IN The Bible
Our privacy policy