The Sin of the Spies 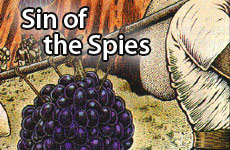 The deeper connection between the wandering in the desert and the destruction of the Holy Temple.

The Torah (Numbers ch. 13-14) describes the famous story of the 12 spies ― one from each tribe ― who are sent into Israel to explore the land. Their mission seems rather innocuous at first: Determine how to battle the Cananites and then settle 3 million men, women and children in the new land. The spies are sent (ostensibly) to survey practical matters like fortification of the cities, geography of the land, opportunities for farming and commerce, the best access routes, etc.

In Israel, God shows them encouraging signs that the land is indeed plentiful and rich: They find a cluster of grapes so enormous that eight men are needed to carry it (Numbers 13:23). God also makes sure the spies encounter heavily fortified Cananite cities ― which in fact is a sign of Cananite weakness, since anyone who is truly powerful does not have to hide behind big walls. (see Rashi on 13:19)

Additionally, God planned the death of a Cananite nobleman to coincide with the spies’ visit, in order to busy the locals with funeral arrangements and mourning ― as a way to divert their attention from the reconnaissance mission! Everything was perfectly orchestrated; nothing could possibly go wrong.

The Israelite community accepts the report, and gives up their dream of going into Israel. The consequence? If you don’t want to enter the land, says God, then you won’t enter the land. All Israelites will die out over the next 40 years in the desert, and only their children will enter the land.

Numbers 14:1 tells us the people’s reaction to this news: “The people wept that night.” That night was Tisha B’Av, the ninth day of the Jewish month of Av. God declared: “They cried for no reason; in the future I’ll give them good reason to cry.”

Hundreds of years later, the destruction of the First Temple was to occur on Tisha B’Av. And 500 years after that, the Second Temple was destroyed on Tisha B’Av as well.

The spies lost their anchor. They got so wrapped up in the pragmatics of conquering the land, that they took God out of the equation ― and never put Him back in! The original question they’d been assigned to answer ― "How to conquer the land” ― suddenly became a question of "should we or shouldn't we."

What caused this twist to occur?

God’s presence was palpable in the desert: a rock provided a steady supply of water, Clouds of Glory kept enemies at bay, and a daily supply of manna fell from heaven. Yet these “open miracles” were to cease upon entry into Israel. Thus, the spies reasoned, God’s guidance and protection would cease as well.

From this skewed perspective, all the positive signs that God had shown them ― the fruits, the funeral and the city walls ― were turned into negatives. From a purely pragmatic perspective, their conclusion was ― not surprisingly ― “This is not possible!”

Moses, being the great leader that he was, knew that the spies were susceptible to losing their anchor. So before they departed on their mission, he changed the name of one of the spies from “Hoshea” to “Yehoshua” (Joshua). The name “Yehoshua” means “God will save.” It also begins with the letters of God’s Name ― Yud and Heh. This was Moses’ attempt to keep the spies focused on that crucial transcendent connection.

To some extent, Moses was successful; Joshua was one of two spies who protested the negative report ― and was rewarded with entry into the land.

This dynamic can appear in our own lives as well.

Each of us has a “life vision.” The Torah teaches that when one’s “vision” is driven by a connection with God, then the ability to achieve transcends all boundaries. Since God can do anything, all success depends only on His will.

Without that connection, one’s ability to achieve is defined by mortal limitations. It is logical, therefore, to assume that many goals are not possible. Hence the origin of the popular expression, “I can’t do it; it’s not possible.”

Be it needn’t be that way. Living in accordance with the will of God gives one the confidence to know that the more you are connected, the greater will be your degree of transcendence. And then, anything is possible.

Our nation has seen that God can do anything. When the Israeli armed forces defeated Arab armies in a scant Six Days, we knew quite clearly that we’d exceeded our mortal limitations.

The incident of the spies took place on Tisha B’Av. Unfortunately, it is a recurring theme in Jewish history: We lose sight of our connection to God, forfeit that anchor, and descend into a mode of finger-pointing, arguments, excuses, and ultimately, national suicide.

Time will tell whether we find our anchor, get on track, and succeed in building a national Jewish consciousness that can stand up against the forces which lure us away from our vision and dream.

With the help of God, we will succeed. 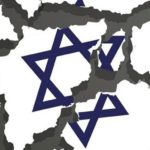 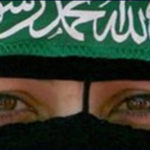 On the Same Team4 min read